If a business has an on premise Exchange infrastructure today and they want to move to O365 there are a few ways to go about it. The easiest one, suitable for smaller (up to 50 or so) environments is a simple cut over. On Friday its in-house mail, on Monday it’s all been migrated to the cloud. This requires changing the MX record for your email domain to point to O365.

The next option is a staged (known as simple co-existence in early O365 documentation) migration which offers a unified Global Address List (GAL) but without sharing Free/Busy calendar information. The third option is a hybrid (formerly known as rich co-existence) deployment with sharing of all information between on premise and the cloud. This is also the only model that allows off boarding (moving a mailbox from the cloud back to on premise), all of them of course involve on boarding. Both hybrid and staged leave the MX record for your email domain pointing to your on premises Exchange server. In a hybrid environment you need an Exchange 2010 SP1 server on premise (running the Client Access Server and Hub transport server roles); the license for this is part of the O365 subscription. 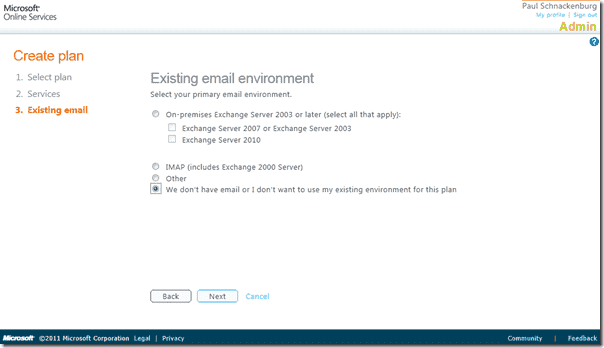 Let the Office 365 deployment wizard help out with your email migration planning.

In both staged and hybrid Outlook Anywhere (formerly known as Outlook over HTTPS) needs to be enabled before the migration starts and a service account that has full access to everyone’s mailbox needs to be configured.

Another thing to inventory in large environments is in-house applications that need outgoing SMTP functionality; for these you either need to leave an SMTP server on site or point these applications to FOPE for outgoing relay. This will work for a small number of apps but if there are a lot of them the manual work of configuring FOPE is going to outweigh the benefits and it’ll be better to maintain an SMTP server in-house. 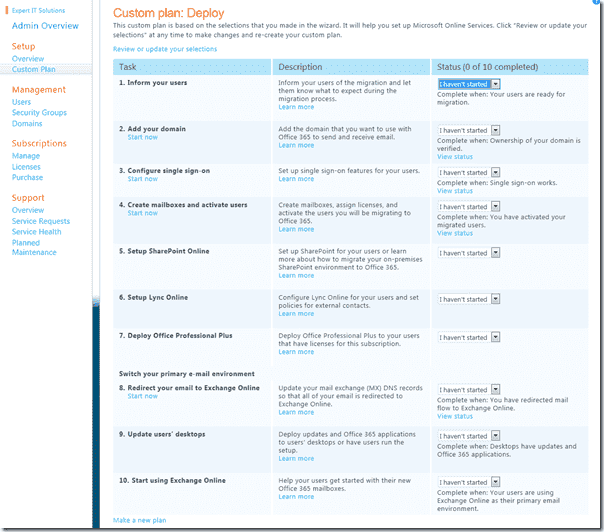 Not only does the Deployment wizard ask the right questions, the resulting deployment plan is interactive and allows you to track your migration progress.

In the next part of this series we’ll look closer at the hybrid email co-existence scenario as well as how Exchange Online archiving works and what options there are for Information Rights Management.