Paul Schnackenburg  Thu, Aug 4 2011Thu, Aug 4 2011  cloud computing, office  0
In this series of articles on Microsoft’s Office 365 we’ve come to the fourth part of eight and here we’ll explore Exchange Online, what’s included and how to administer it as well as how voice messages can be integrated through Unified Messaging.

The email service behind Office 365 is built on Exchange Server 2010 which brings all the power of this messaging and collaboration powerhouse to users without requiring complex in-house infrastructure. As part of the service you get anti-spam and anti-malware courtesy of Forefront Online Protection for Exchange (FOPE); you can still continue to use an existing email filtering solution if you want to. Most features of Exchange 2010 that are available on-premise such as multi mailbox search and transport rules are also available in Office 365. Remote PowerShell can also be used but since Office 365 is a multi-tenant environment cmdlets that work forest wide aren’t available. Role Based Access Control (RBAC) is a very powerful feature for configuring what people can do in the environment based on their job role and it’s fully implemented in O365.

What’s in and what’s not in Exchange Online ^

Some differences between Exchange 2010 on premise and O365 are that the private or public computer choice in Outlook Web App (OWA) isn’t available. If you’re using the full Outlook client it has to be either 2007 or 2010, Outlook 2003 isn’t supported. You can’t segment your Global Address List (GAL) and there is no public folder support in O365 at all, there’s also no S/MIME support.

If you have a compliance server or appliance for checking outgoing mail you can configure O365 to direct all outgoing mail back through your on premise device before delivery. The support for smartphones is on par with on-premise installations including configuration of policies, the E plans also include Blackberry Enterprise server. 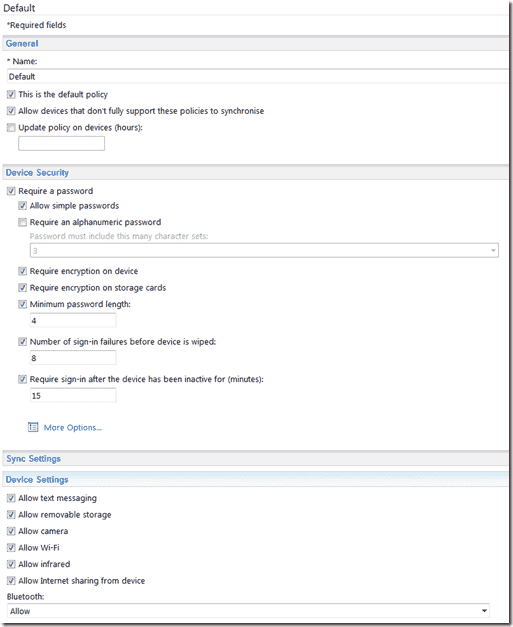 Email and calendar access on smartphones is a requirement for today’s Information Workers and the support in Office 365 is as thorough as it is in Exchange 2010.

Unless you’re familiar with Exchange 2010 the new ECP web based console is probably going to be a bit of a learning curve. A lot of O365 email features such as journaling, transport rules, distribution lists, user roles and auditing are configured here. ECP will only show O365 users that have mailboxes and you can tell the difference between Dirsynced accounts and native O365 accounts in their different icons. As anyone who’s ever used the Exchange 2010 console knows there’s a node to manage Exchange Online as well as on premise.

You can also reach the FOPE console from the ECP. If particular users are being investigated legally you can enable legal hold for their mailboxes and just like in Exchange 2010 on premise this means that no items can be deleted. The user won’t see any difference in using their mailbox, they can delete emails but in the background they’re not actually deleted; it’s optional to inform the user that their mailbox is under legal hold.

The Exchange Control panel is a great addition to Exchange 2010 and really makes managing communications in Office 365 easy.

Unified Messaging (UM) is an Exchange 2007/2010 feature that delivers incoming voicemail as a message in your inbox; if you want to use this in O365 it requires a Session Border Controller (SBC). This is the device that connects your on premise phone system to O365. There are some countries where local laws prevents Microsoft from offering the UM feature, notably India.

In the next part of this series we’ll look at how migration to Exchange Online is done and what needs to be considered in the planning for email co-existence.