Paul Schnackenburg  Tue, Jul 26 2011Sat, Mar 2 2013  cloud computing, office  0
The second part of eight of this Microsoft Office 365 review will cover system requirements, the included Office Professional Plus subscription what the Desktop Setup tool is used for as well as the PowerShell integration in Office 365.

The requirement for client machines to use Office 365 are; Windows XP SP3, Vista SP2 or Windows 7; Mac OS is supported in the 10.4, 10.5 and 10.6 versions. If you’re using an existing version of Microsoft Office to interact with O365 it needs to be Office 2007 or 2010 on Windows, with Office for Mac version 2008 or 2011 supported. If you’re using Office for Mac 2008 make sure you have deployed the web services version of Entourage. There’s no included Office for Mac subscription.

The included (in the E3 & E4 plan) Office Professional Plus subscription is managed on a per user basis; there are no activation keys to keep track of. When you assign a user a license their Office Professional Plus will check every 30 days that the license is still assigned to that user. Each user can install Office Professional Plus on up to five computers, making it easy to have Office 2010 on a work computer and a home computer. If a user’s license is unassigned Office will enter warning mode after the next check and continue to function as normal for 60 days after which it will revert to reduced functionality mode (effectively read only) until the license can be verified again.

Office Pro Plus can’t run as an App-V application, nor can you run it on a Terminal Server / Remote Desktop Server and it doesn’t include downgrade rights to earlier versions of Office. As this is a subscription service you should receive an automatic upgrade to the next version of Office (2013?) when it’s released. If you’ve got many client machines it’s recommended to use a network share or System Center Configuration Manager (SCCM) to deploy the 750 MB installation.

Office 365 keeps track of the type of license assigned to each user and their service entitlements.

Another tool that’ll be part of your O365 deployment is the Desktop Setup Tool, which is downloaded from the O365 web portal and which checks the local OS for missing updates and service pack level as well as configures Outlook, Lync and local Office installations. In small environments just run this on every client machine that’s going to be using O365; be aware that on a Windows XP and Office 2007 the download can be up to 450 MB (depending on how up to date it is), whereas on a current Windows 7 machine with Office 2010 the download is about 45 MB. The portal also lists all the required updates and configuration changes so that you can implement these across large numbers of client machines using SCCM or a third party patch and configuration tool. The Desktop Setup Tool requires local admin permissions and can’t connect through a proxy server that requires authentication. 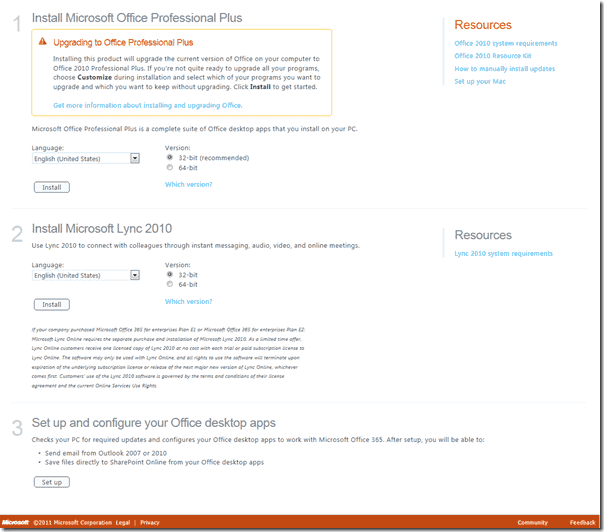 Make sure you understand what changes the Desktop Setup Tool makes in your environment.

Whilst BPOS offers some PowerShell management capabilities O365 takes this to the next level and lets you manage users, license allocation, email / SharePoint internet domain management as well as administration role management. Currently you need to run PowerShell on Windows 7 or Windows 2008 R2 (Vista and XP support coming later) to manage O365 and you need to install the O365 snap-in. Currently only the core O365 features and Exchange Online can be managed via PowerShell; Lync and SharePoint support is coming. The PowerShell environment (just like the web portal) respects role based administration so that if you’re a license administrator you can only run license related cmdlets. There’s full support in O365 for the concept of “administering on behalf of” in both PowerShell and the web portal for cases where a partner manages O365 for clients, something that’s not quite as smooth in BPOS. 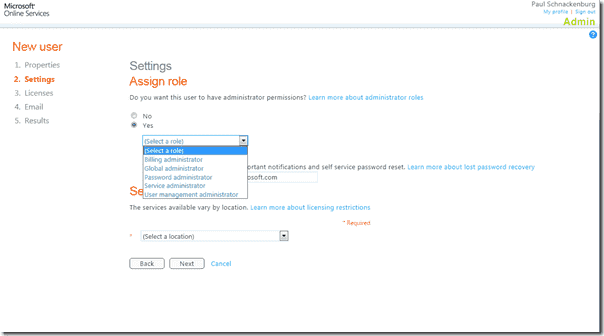 Administration of Office 365 is more granular than in BPOS.

In the next part of this series we’ll look at how authentication works in Office 365, how integration with Active Directory is achieved as well as the true nirvana of cloud services – Single Sign On.