Paul Schnackenburg  Thu, Jul 21 2011Fri, Jan 25 2013  cloud computing, office, sharepoint  7
This first part of an eight part overview of Microsoft Office 365 explains what it is, what benefits it can bring and outlines Office 365 pricing.

There’s been a lot of noise around the beta and subsequent launch of Microsoft’s Office 365 recently. Touted by some as late coming competition to Google Docs and by others as the best productivity cloud service on the planet there’s no doubt that O365 (as I’ll call it in this article) is a great improvement over the Business Productivity Online Suite (BPOS ). 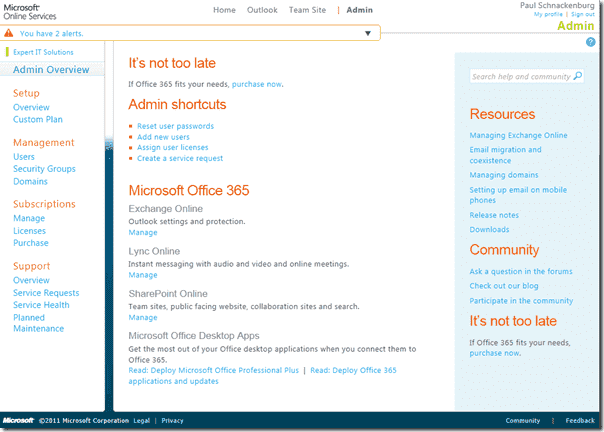 In this eight part article we’ll look at what O365 is; the different plans that are available and then we’ll dive into the technical details of deployment, interoperability and capabilities. Further we’ll examine the different services that are part of O365; Exchange Online, Lync Online and SharePoint Online.

Let’s get the boring stuff out of the way first; Office 365 pricing, licensing and plans. O365 comes in three flavours: Small Business (the P or Professional plan), Enterprise (E plans, numbered 1 to 4) and Kiosk (K1 and K2). There’s also a plan for schools; Education (called K-12).

Let’s start with the Enterprise plans; these are all designed for Information Workers in medium to large corporations: E1 gives you Instant Messaging / Presence and Conferencing (Lync Online), Collaboration (SharePoint Online) and Email (Exchange Online) for $10 per month (all prices in USD). E2 adds Office Web Apps access at $16 per month. E3 gives you Excel, Access and Visio services in SharePoint, Voicemail and archiving of email as well as a subscription license to Office Pro Plus (Office 2010, running on the client machine) at $24 a month with E4 adding voice capabilities at $27 per month. All E plans give you a 25 GB mailbox.

Don’t be confused by Microsoft using the term “Office” for both the service and installed software. Office 365 is the service you pay for per month, per user, and Office Pro Plus is a version of Office 2010 that you install on end users machines that can save documents to SharePoint online.

For “kiosk” users, those who do non computer tasks in their jobs and only need occasional access to email and documents on shared computers there is K1 which gives web based access to Exchange email and SharePoint (read only) at $4 per month and then K2 which adds Office Web apps for document editing at $10 per month. Both K plans give you a 500 MB mailbox.

The P plan for small business (up to 50 users) gives you Instant Messaging / Presence and Conferencing (Lync Online), Collaboration (SharePoint Online as well as Office Web Apps) and Email (Exchange Online) for $6 per month along with a public facing simple website and a 25 GB mailbox.

The premise for O365 is simple: small, medium and large businesses spend a big proportion of their IT budget running Exchange (the world’s most popular email system) and SharePoint (the world’s most popular collaboration platform) on premise today. Whilst email and collaboration services are essential to many businesses today there’s a lot of work involved; hardware has to be maintained, software patched, and upgrades planned and executed. Many corporations are on older versions due to the cost and complexity involved in upgrading. By moving to a cloud based service all the maintenance of the infrastructure goes away and the business simply pays a monthly fee for the service, provided by Microsoft with a financially backed Service Level Agreement (SLA).

O365 is based on Microsoft’s latest releases which were all developed with multi-tenant, hosted environments in mind; Exchange 2010, SharePoint 2010 and Lync 2010. And this is the greatest strength of O365, it’s not new software, it’s mature, tried and tested production systems, used today by hundreds of millions of users around the world, just offered in a different format: as a pay as you go service in the cloud. 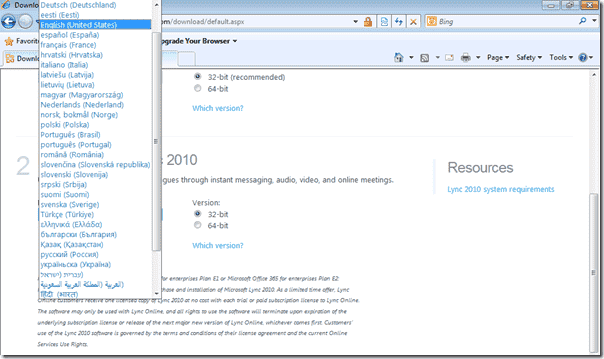 In the next part of this series we’ll look at how Office 365 is deployed, system requirements, what needs to be installed on the client, what Office Pro Plus is and how the Desktop Setup Tool is used as well as PowerShell integration.