Wolfgang Sommergut  Mon, Mar 30 2020Mon, Mar 30 2020  cloud computing, microsoft 365, office  8
If companies want to purchase Microsoft's Office package today, the manufacturer offers them a variety of options. Customers not only have to decide between a subscription and a permanent license, but also make choices about update intervals and support periods.
Contents

After support for Office 2010 expires in October this year, affected companies will most likely need to update. However, if you have not dealt with Office licensing since you bought version 2010, you will probably be surprised by the number of purchase options.

An obvious choice could be to simply purchase a package with Word, Excel, PowerPoint, etc. for each PC again. This is still possible, even if a few things have changed.

Office 2019 is currently the designated successor to the 2010, 2013, and 2016 versions. Microsoft only uses the year as a version number for packages that include just the known desktop applications and for which you acquire a perpetual license. As usual, retail and volume licenses are available.

For companies, Microsoft offers Office 2019 in Standard and Professional Plus editions. The former includes Word, Excel, PowerPoint, and Outlook. Publisher is only available for Windows, not for Mac. Professional Plus also includes Access and Skype for Business. In both cases, Visio and MS Project must be purchased separately.

Editions of Office 2019 for businesses

The installation is no longer done as an MSI package, but via click-to-run. This procedure automatically copies all Office applications to the PC, always to the system drive (which cannot be changed). If you want to choose the applications to set up, you can use the Office Deployment Tool.

The support period has also changed, but not to the benefit of the customers. The usual 5 + 5 years for basic and extended support have been changed to 5 + 2 years; thus, the lifecycle of Office 2019 ends on October 14, 2025.

An update for this flavor of Office is available every 3–4 years, so that it is in sync with the intervals of the Long-Term Servicing Channel (LTSC) for Windows 10. This correlation is not accidental; in fact, users of Windows 10 LTSC can only run Office 2019 and Microsoft does not support Office 365 on this operating system.

The minimum requirements for Office 2019 are generally Windows 10 and Server 2019; on older versions of the OS, you must use one of the previous versions. Customers who have purchased extended security updates for Windows 7 will receive support for Office 2013 and 2016 up to January 10, 2023.

The Office 365 brand is often used inaccurately, for example, to describe only cloud services such as Exchange Online. In fact, there are multiple packages comprising online services and applications.

Microsoft is targeting Office 365 Business at smaller companies (up to 300 users) and offers four subscriptions for enterprises. The main difference between the packages is the cloud services included. In E5, this covers practically the entire portfolio of Microsoft's online applications. In addition, the SMB versions do not include the Publisher app.

A major disadvantage of Office 365 Business is that its applications cannot be managed using Group Policies. They don't support the recently introduced Office Cloud Policies as an alternative either. 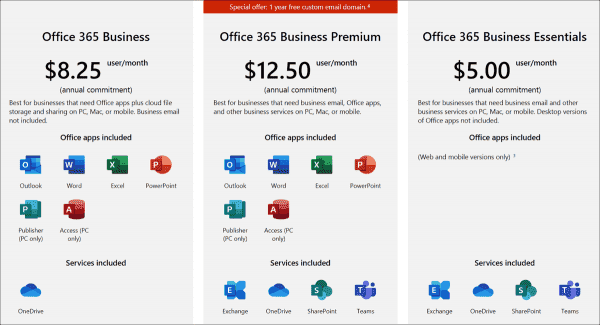 The web versions of Word, Excel, and PowerPoint are always included, and the e-subscriptions offer Outlook too. The Office app for iOS and Android, which has recently been released in a new version, is basically free of charge. If you sign up with an Office 365 subscription, it will offer you additional features. 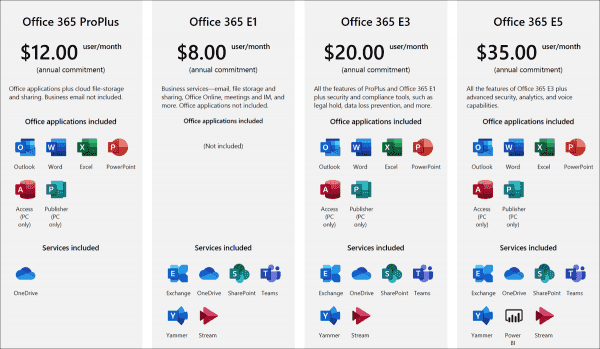 While a user may install Office 2019 on only one computer (PC or Mac), Office 365 allows using the programs on up to five devices per user. For mobile devices, this can be the app or the web version.

Whereas Office 2019 effectively represents the Long-Term Servicing Channel, the Office applications within the various O365 subscriptions are updated at shorter intervals. As with Windows 10, Microsoft publishes the desktop programs in distribution rings: the monthly, the semi-annual channel (SAC), and the semi-annual channel targeted (SAC-T) releases.

Distribution rings for the desktop applications in Office 365

While the monthly updates are mainly suitable for testing macros and add-ins, the SAC-T release is intended for selected pilot users who test the new version under real conditions. The actual migration then follows via the SAC, where an update appears with a delay of about four months after the SAC-T.

As is the case with Windows as a Service, admins are also obliged to update their computers to a supported version on a regular basis. Under the Modern Lifecycle Policy, support for the Office 365 applications ends after 18 months, and the clock starts ticking as soon as the application appears in the SAC-T.

Microsoft 365 is also a bundle of applications and cloud services. In addition to Office 365, the bundle contains other products that are primarily focused on the management and security of end devices.

As with Office 365, Microsoft also differentiates between plans for medium and large companies. For example, Microsoft 365 Business includes Information Rights Management, Advanced Threat Protection, and MDM with Intune, while the Microsoft 365 Enterprise versions add Windows 10 Enterprise and Azure AD Premium on top of that.

Application and services of Microsoft 365 Business

The objective of a fully equipped Microsoft 365 is obviously to provide companies with an entire stack of software and services via a subscription model that covers most of the requirements of a knowledge worker. It ranges from the client OS to extensive cloud services, with costs in the mid-double-digit range per month and user.