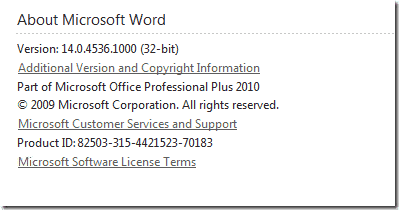 With the ever-increasing availability of high-storage RAM, 64-bit processors and the systems to power them, all at prices within the reach of every consumer and SOE, 64-bit computing is fast becoming the normal state of play.

According to the Microsoft 2010 Engineering blog, customers who have access to download the product media (such as customers with a VL agreement with Software Assurance, and MSDN/TechNet subscribers) will have a choice about which version they would like to download (both are available). Customers who buy the physical media will receive both versions. Software Assurance customers will have access to the media from April 27th.

Although Windows XP came in a 64-bit flavour, Windows Vista was the first Microsoft OS to make it especially accessible and feasible for everyday computing. There was comprehensive driver support (eventually) and very few compatibility or stability issues. Windows 7 64-bit has proven to be very popular in both consumer and business environments, and Microsoft has been working hard to ensure that it’s full product suite accommodates both platforms.

The 32-bit version of Office will run fine on 64-bit Windows, as do most 32-bit applications thanks to the x86 emulator WOW64 which runs on all 64-bit versions of the operating system. Because the operating system can reference the 64-bit memory address space and can therefore make use of physical RAM above 4GB, the 32-bit version of Office will automatically receive a performance boost when running on 64-bit Windows, due to reduced memory swapping, disk read/writes and disk thrashing in a multi-application environment. This is the scenario which Microsoft envisages will be the most appropriate for the vast majority of users.

The two versions of Office 2010 cannot exist side-by-side on the same physical system. This is true whether a single Office product is installed or the full suite. For example, if the Office installer finds Outlook 2010 x86 installed, it won’t allow you to install Word 2010 x64, so the 32-bit version would have to be removed fully before the 64-bit version could be installed.

Additionally, if you have any of the following 32-bit applications installed, an installation of Office 2010 64-bit will be blocked:

Although a reason for this has not yet been fully articulated, it makes sense that the supporting Office infrastructure and shared programs must all be on the same platform. It is also possible that the different versions might be usable on the same physical system if one of them has been virtualized, using Microsoft Application Virtualization for example. The latest build, version 4.6, supports 64-bit apps and 64-bit operating systems.

If you’re already running Office 2007, you can upgrade to Office 2010 32-bit on either a 32-bit or 64-bit version of Windows. Office 2007 cannot be upgraded from 32-bit to Office 2010 64-bit (this is a limitation which is consistent across all Microsoft products). There is no information currently available as to whether it is possible to upgrade from Office 2003 to Office 2010.