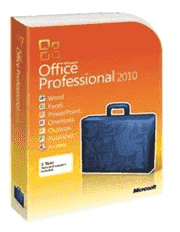 In the last article I looked at the installation of the 32-bit and 64-bit versions of Office 2010. In this part I’ll cover the important considerations in choosing which platform to go with. This principally comes down to the advantages and disadvantages of Office 2010 64-bit.

Apart from the general ability to address more physical memory, the main advantages of using the 64-bit version of Office 2010 will be experienced by power Office users, who, for example, might use Excel spreadsheets which reference massive amounts of data, or who regularly work with Office files greater than 2GB in size. Microsoft Project also benefits, with the ability to handle large, multiple subprojects contained with the main project.

64-bit machines also have a security advantage via mandatory hardware-based DEP (Data Execution Prevention) for native 64-bit applications. With the 64-bit version, this protection is now available to Office.

The increased protection and scalability of Office 2010 64-bit unfortunately comes at a cost.

Many applications interface directly with Office, either via ActiveX controls (eg: Internet Explorer) or third-party add-ins (eg: Adobe Acrobat or internally-developed business apps). Because these external interfaces have never had to be made available in both 32-bit and 64-bit flavours, some applications won’t be able to natively communicate with the 64-bit version of Office 2010 until ISVs and in-house developers have had the time and opportunity to update their solutions accordingly. Office 2010 64-bit will install some 32-bit ActiveX controls so that the 32-bit version of Internet Explorer can interface correctly, but even then some functionality like “Edit in Datasheet” will only work in Office 2010 32-bit.

Differences in “bitness” (a registry key which records the application version) can cause issues in OLE scenarios. When a registered application on an OLE server is different to the installed version, or if a 32-bit object is embedded into a 64-bit application, compatibility issues may be encountered. Additionally, because there is a lack of Intel MMX technology support on 64-bit processors, 64-bit GDI (Graphics Device Interface) may experience some differences in performance compared to the 32-bit version.

Finally, some VBA code written for 32-bit applications will not automatically function seamlessly on a 64-bit platform, and will need to be updated accordingly, as will custom applications which make MAPI calls to Microsoft Outlook.

These various considerations may mean that, in spite of the benefits it provides, Office 2010 64-bit is not a viable option for many customers. This is why, from the position of maximising compatibility within customers’ environments, Microsoft is recommending the 32-bit version regardless of the bitness of the underlying operating system.

Microsoft’s approach is unsurprising. In spite of the increased popularity of 64-bit operating systems, true 64-bit applications still remain the domain of power users – users who exclusively use a small range of applications in a way which is far more advanced compared to the usage of the vast majority of everyday users. This is also true in other areas which rely heavily on computing, such as digital art and CAD.

Personally, while I’m a heavy Office user there is no way that I could ever push it hard enough to justify installing the 64-bit version, but all my Windows 7 machines are 64-bit and I’m looking forward to seeing how much better the 32-bit version of Office 2010 runs. However, this is not to say that 64-bit applications won’t become the norm over time, and Microsoft have done a good job in continuing to push 64-bit computing across all aspects of the IT industry.

Also read the first part of this article: The installation of the 32-bit and 64-bit versions of Office 2010