No news about Windows 9

Home Blog No news about Windows 9

Paul Thurrott proved once more his great connection to Microsoft insiders. In his latest post, he reveals a few irrelevant things about the upcoming Windows 9 release.

Latest posts by Michael Pietroforte (see all)
Of course, quite a few magazines and bloggers picked up the story, essentially just copying Paul’s post. I don’t need to repeat all of it here because, in my view, we don’t really know much about the next major Windows release. Perhaps the most exciting news is that the next version after Windows 8 and Windows 8.1 is not Windows 8.1 Update 1.1 , not Update 1 of Windows 8.1 Update 1, and not Windows 8.2; it will be, I think you guessed it already, Windows 9. Aside from that, there appears to be a likelihood significantly above 0 that Windows 9 will be released in April 2015. And new features? So far, I found two “breathtaking” new features that Windows 9 might or might not have. One is the rebirth of the beloved Start Menu; the other one is the ability to run RT apps in desktop windows. There also is this rumor that already spreads for a while that Windows RT and Windows Phone will be united. This would certainly be a big change. What I find most interesting about Paul’s latest post is that there actually is no new noteworthy information about the next Windows version. I have three explanations for this. Either Microsoft doesn’t reveal relevant information about Windows 9 to their unofficial spokespersons Paul Thurrott and Mary Jo Foley, Microsoft engineers are relatively clueless about how to go ahead or, and I think this is more likely, the unification of Windows Phone and Windows RT is so complex that it will be the only important change in Windows 9. One thing is for sure, bringing back the archaic Start Menu is not the answer to the growing Android threat. Android is now running on more than twice as many devices as Windows. Although many of these devices belong in the new Internet of Things category, Android certainly has become a serious threat to Windows. And I am not just talking about the fact that PC shipments suffered a record decline in 2013 (10%) while tablet shipments increased by 54.4%. The Android ecosystem is growing rapidly, making it more and more interesting for developers and hardware manufacturers. It is thus no wonder that the battle between Android and Windows for the desktop has now officially begun. 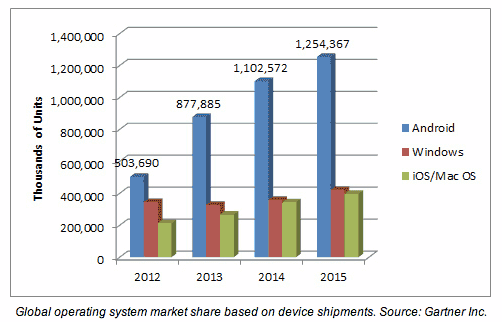 Do you think that the renaissance of the Start Menu in April 2015 is the answer to Android? What is your estimation of Android’s share of the PC market (laptops and desktops) at the end of 2014? My bet is not below 20% if Bill Gates isn’t able to conjure a new magic CEO out of his hat.