Nine is Outlook for Android

Michael Pietroforte  Thu, Dec 11 2014Thu, Dec 11 2014  android, exchange, microsoft 365  32
I think it is safe to say that Microsoft just snapped up the wrong Android email app. Not only is Nine a more powerful email app than Acompli, but it is also much better adapted to Exchange and Office 365. Yes, Nine is THE Outlook app for Android.
Contents

For quite a while, I’ve been looking for a good email app for my Android phone. Microsoft’s purchase of Acompli inspired me to search again because their email app did not really convince me. I then tested MailWise, myMail, CloudMagic, and Blue Mail. Although some of them are better than Acompli, I wouldn’t like to use any of them. I was already close to giving up when I found Nine. There is no doubt that Nine is, by far, the best Android email app for Exchange and Office 365. I’d say it plays the same role in the mobile world that Outlook plays in the PC world. 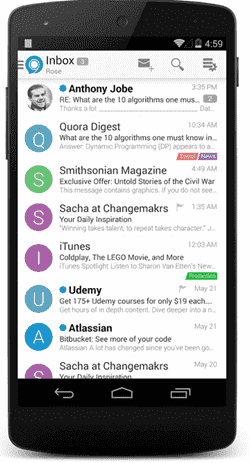 Nine has an impressive number of features and is very intuitive to use. However, the best part of the app is that it doesn’t support Gmail (Google Apps with ActiveSync is supported). No, this is not just fan boy talk. During my tests, I began to wonder why all of the apps I tried lack even the most basic Outlook features, such as proper flagging. I came to the conclusion that the developers had to design the app around the lowest common denominator of the supported email servers. In contrast, Nine focuses on ActiveSync and Exchange, and it can therefore offer essential features that can only work with Exchange as a backend.

Nine supports Exchange Server 2003 SP2/SP3 and above, Office 365, and Outlook.com. Unlike with Acompli, adding my Office 365 accounts worked right away without any problems. Whereas I had to tap and slide quite a while until I really understood how Acompli works, Nine immediately felt like an app that I have been using for ages. I guess it has to do with the fact that I’ve been working with Outlook since its first version came out in 2007.

I can’t discuss all of Nine’s features in this review. Instead, I will talk a little about the features that are most important to me. Everyone has a different work style; thus, if your company is working with Exchange or Office 365 in the backend, you should have a look at this app to see if it is an alternative to your current mobile email app.

Nine supports emails, tasks, notes, calendar, and contacts. However, the latter two are only synced with the native Android apps—that is, Nine does not offer a UI for those two data types. This doesn’t really hurt because the calendar and the contact app built into Android are quite powerful, and, thus far, I didn’t miss a feature here. The point about syncing calendar and contacts with Nine is that you only have to manage one Exchange account under Android. For instance, if you change your Exchange password, you only need to change it once in Android.

I think Nine is the first PIM for Android I tried that supports Exchange Notes. If you use OneNote or Evernote, you probably won’t find this feature exciting. However, many users still have notes in Outlook and, for making a simple note every now and then, Outlook Notes is sufficient. Nine allows you to search in your notes, add new ones, and edit old ones. 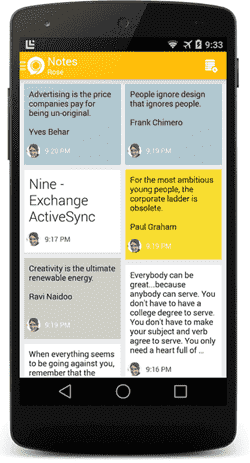 The Task component is relatively simple; however, you feel that the developers know how tasks are used in Outlook. Hence, even though Nine Tasks does not have more features than S Planner (the native Android app on Samsung phones), it is definitely the best task app I used thus far under Android. The app has four tabs: All, Active, Overdue, and Completed. Except for the Overdue tab, each is categorized according to the due date of the task. The due date is clearly visible in front of the task, which I find quite helpful. Editing tasks is somehow easier than in S Planner, and you need fewer taps to configure the task. However, the best part of the Task app is that it shows not only Outlook tasks but also flagged emails. 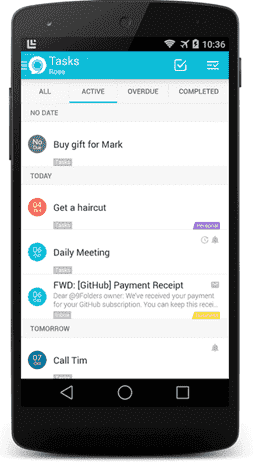 This feature is well known from Outlook, and I outlined in my Acompli review why I think this is an absolute killer feature. If you tap the Active tab, you get a good overview of the things that have to be done today, including the emails that have to be answered. If you scroll down, you’ll see the tasks for tomorrow, next week, this month, and next month. Thus, Nine organizes tasks just as in Outlook’s To-Do list. Nine doesn’t show flagged contacts like Outlook does, and it also doesn’t display calendar entries like S Planner does. So, there is room for improvement in future versions.

However, the way emails can be flagged in Nine is exemplary. Actually, flagging works exactly like it does in Outlook. If you tap the flag symbol of an email, Nine will assign today’s date, and the email will then appear in today’s tasks in Nine’s Task app or in Outlook’s To-Do list/bar. 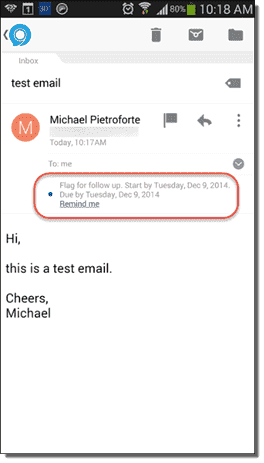 Just as in Outlook, a short note appears in the email with its follow-up date. Tapping this note opens a dialog window where you can set another due date. The options are Today, Tomorrow, This week, Next week, Someday (no due date), and Pick date (set a specific due date). In addition, you can set a reminder that will produce an alert on the configured date and time. And yes, you are right, it is all just like in Outlook. 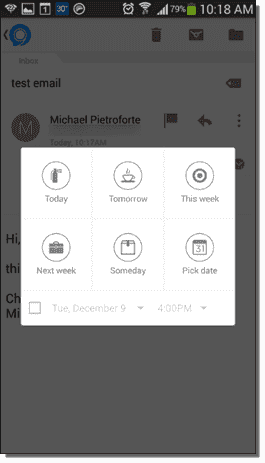 Choosing a due date for an email

Nine also supports conversations. If you tap a conversation, you’ll get a threaded overview with an excerpt of each email. This allows you to quickly find the email you are looking for. Another tap on an email in the thread will open the complete message. As in Outlook, you can sort emails according to date, from field, subject, priority, start date, and due date. 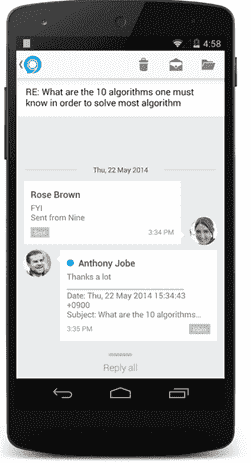 Another feature that demonstrates that Nine is well integrated into Android is the way you attach files to emails. You can load files from a variety of Android apps that have an integrated file browser, such as Dropbox, OneDrive, and Gallery. Of course, the apps you use to attach files have to be installed on your Android device. If you attach a file from a cloud drive, Nine doesn’t just add a link to the file (like Acompli does) but attaches the complete file. This is certainly the preferable way to send attachments. 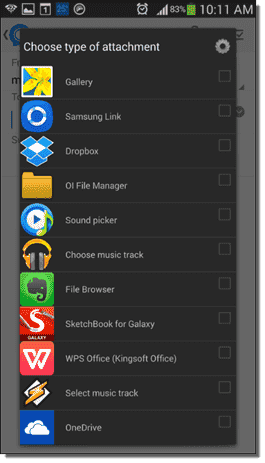 Nice also offers a variety of features that are important in mobile device use. A feature I miss in most email apps for Android is the ability to sync individual email folders. Some of my folders contain emails that I want to be accessible when my phone is offline. Email apps usually only sync email at certain time intervals. If you want to access older emails, you have to be online and use the search feature. 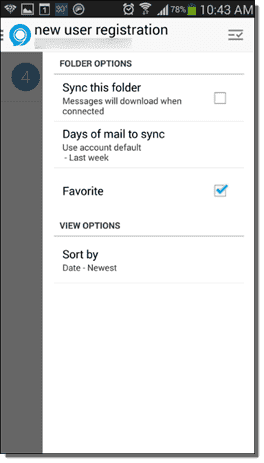 In Nine, you can configure, for each folder separately, whether its messages are synced and the age of the emails to be synced. You can also sync all emails of a specific folder. A nice-to-have feature is the ability to define favorite folders, so an old important message can be reached quickly—yup, all as in Outlook.

Heavy email users will like the various widgets Nine offers. One widget displays the number of unread emails in all your inboxes, another widget displays specific inboxes, and another displays flagged emails. You can also start composing a new email with just one tap. 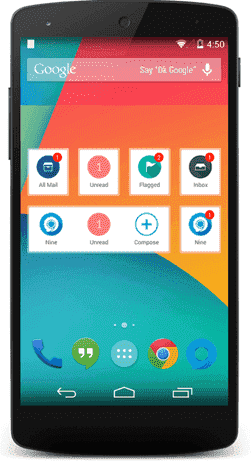 A feature that Outlook lacks that is essential for any mobile app is sync scheduling. Nine allows you to set peak times and days on which emails are synced with Exchange. This can be configured for each of your accounts separately. So, you can ensure that you won’t be bothered with alerts from your office account after work time, but you can still get notified when private emails arrive. You can also define sync frequencies and disable syncing when roaming. This will help to treat your data plan with care.

As mentioned above, I didn’t discuss all of Nine’s features. If your organization works with Outlook/Exchange and you need to equip your users’ mobile devices with Outlook, you definitely should have a look at Nine. Your users will feel at home right away and won’t bother IT too often with questions.

Of course, Outlook is several magnitudes more powerful than Nine, but this won’t surprise you because no mobile device matches the PC when it comes to productivity. Nevertheless, Nine is at least one or two magnitudes more powerful than any other email app for Android I know. Of course, you can’t expect such an app to be free (but you can try it for free). I am unsure if Nine would have been worth $200 million for Microsoft (Acompli certainly wasn’t), but $9.99 is a price that I would gladly pay for such a well-thought-out app. 9folders, the maker of Nine, also offers volume discounts.