We Windows administrators can make good use of this feature in two chief ways:

Failover. If or when one of your server’s NICs fails, network traffic transparently fails over to another member of the NIC team.

Load Balancing/Bandwidth aggregation. We can spread network traffic load among all members of the NIC team. We can also combine the bandwidth of the individual network adapters into a large, virtual pipe. Thus, if we bind two 1 Gbps NICs into a single team, then our server can operate at an effective rate of 2 Gbps.

A NIC team can be considered a virtual network adapter. Thus, we don’t configure TCP/IP parameters on the individual team members; instead, we assign an IP address to the virtual NIC. NIC teaming in Windows Server 2012 supports NIC teams that consist of 2 to 32 members.

Creating a NIC team involves a few decisions on your part. First, we must decide on a team connection mode. Here are our choices:

Switch independent mode. In this mode, NIC team members can be connected to separate switches, and all NIC teaming logic is performed by the host Windows Server computer. The advantage of this mode is that we can transparently fail over to another NIC team member in the case of failure. We also can protect against a single switch failure.

The failover aspect of NIC teaming is accomplished with switch-independent teaming by specifying an active/passive NIC configuration. By contrast, we can set all NIC team members to an active state if pure bandwidth aggregation is our goal.

Finally, we need to decide upon a traffic distribution algorithm that the NIC team will use. Here are our choices:

Address Hashing. This algorithm takes address components of each packet (MAC addresses, IP addresses, etc.) and computes hash values that are used by the server and/or the switch to assign traffic to a particular network adapter.

Hyper-V switch port. This algorithm can use the MAC addresses of your guest virtual machines (VMs) to assign packets to particular NIC team member interfaces.

Okay—enough with the background theory. Now let’s turn our attention to configuring NIC teaming in Windows Server 2012 by using both the Server Manager graphical interface and the Windows PowerShell 3 command-line interface.

We can create a NIC team by using either Server Manager or PowerShell 3. From Server Manager, we can navigate to the Local Server node and change the NIC Teaming property from Disabled to Enabled. We'll then be presented with the NIC Teaming dialog shown in the following figure, from which we can round up our NICs, name the team, and set properties. 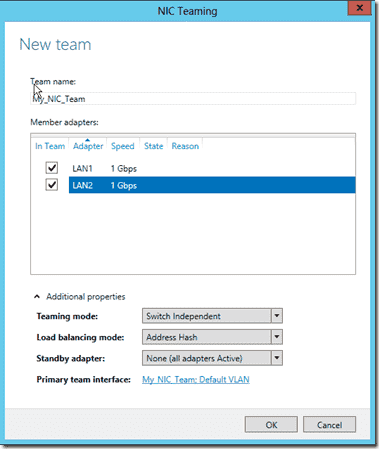 You'll notice that once you have deployed the NIC team, you'll have a new entry in your Network Connections folder: the Microsoft Network Adapter Multiplexor. This is shown in the following figure:

You'll want to set an IP address to the new NIC Team object; this becomes the server's virtual IP address by which it is accessed on your LAN.

The following screenshot displays the NIC team that I configured on my lab server: 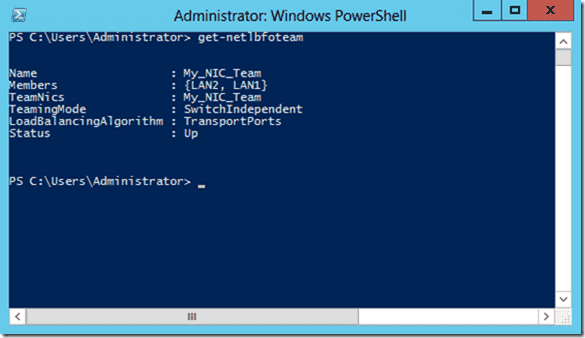 For detailed step-by-step procedures for creating and managing NIC teams, please see any of the following Microsoft resources:

In this blog post we learned the “hows and whys” of the new NIC teaming feature in Windows Server 2012. At this point you understand the benefits of NIC teamings, as well as the basics of how to create and manage a NIC team by using either Server Manager or PowerShell 3.