Next version of Exchange to arrive in 2025; meanwhile, new features for Exchange 2019

Home Blog Next version of Exchange to arrive in 2025; meanwhile, new features for Exchange 2019

Wolfgang Sommergut  Fri, Jun 10 2022Fri, Jun 10 2022  email, exchange  2
Microsoft changed its Exchange roadmap and wants to publish the next (perhaps last) release of the on-prem version in 2025. Compared to the original announcement, the company also revised its licensing. In the meantime, users will receive some new features for Exchange 2019.

Two years ago, Microsoft announced a new release of Exchange Server for the second half of 2021. This should have been available exclusively via subscription. However, the expected release was a long time coming, and Microsoft was silent on the status of Exchange 2022 until now.

In a recent blog post, the company presented its revised roadmap for Exchange on-prem. The new release is not expected to be available until the second half of 2025. To explain this delay, Microsoft cited security problems with which the messaging system was confronted, particularly as a result of the Hafnium attacks. 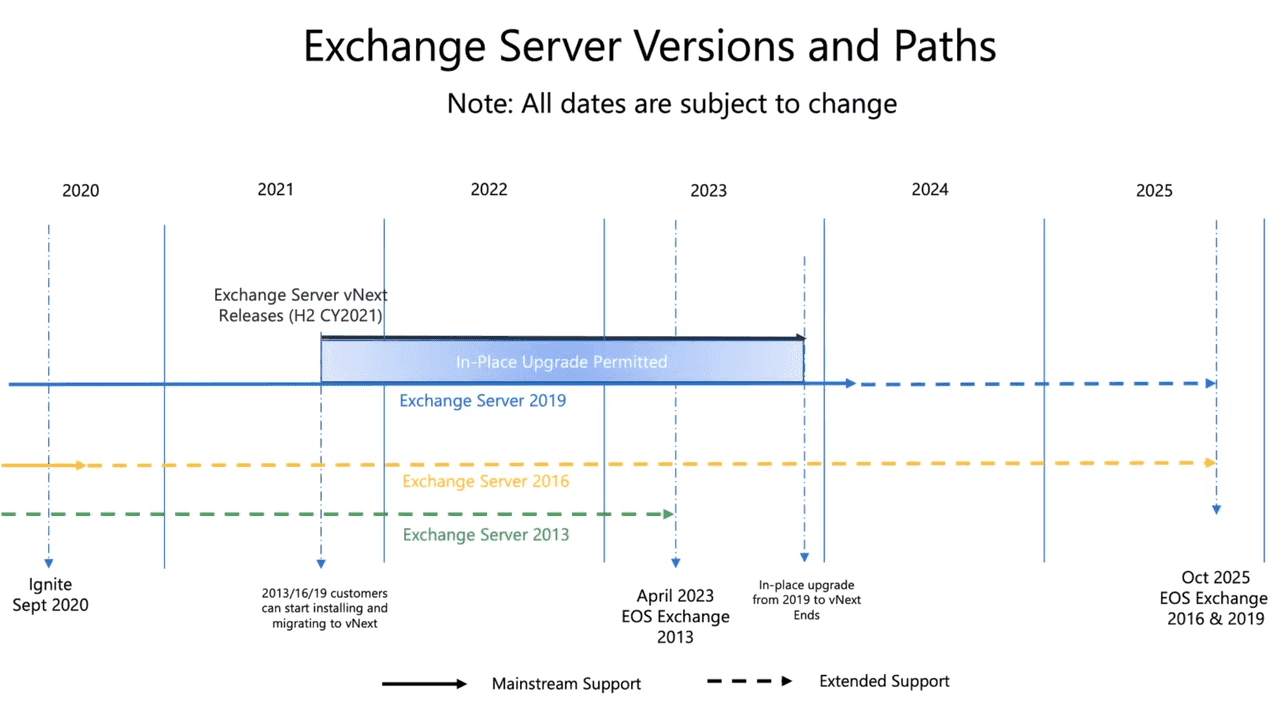 Since then, the manufacturer has invested a great deal of effort in security features, such as AMSI integration, the mitigation service, and MFA support for the PowerShell module. However, it remains unclear why these activities prevented the development of a new version.

Microsoft also made a U-turn on the planned licensing of Exchange vNext. The subscription model is off the table; instead, users will have to purchase server licenses and the required number of CALs, as usual. In addition, however, they will have to sign up for a software assurance (SA).

The main benefit of this sort of maintenance contract is the right to all upgrades that appear during the term. However, with seven years between the release of Exchange 2019 and vNext, customers are unlikely to see any upgrade after 2025 during the typical SA term of three years.

A successor to vNext anytime soon is also unlikely because Microsoft is switching support for the new release to the Modern Lifecycle Policy. This does not specify an end date for support. Rather, according to the announcement, Exchange Server should simply be supported as long as there is substantial demand for the product.

This statement can also mean that Exchange vNext might be "vLast." The Modern Lifecycle Policy allows Microsoft to terminate support for a product within 12 months if there is no successor to it.

Hardly any transition period for migration ^

The plans for support seem half-baked because the lifetime for Exchange 2016/2019 expires as early as October 2025, and vNext won't hit the market until around that time. This leaves users with little opportunity to migrate to the new release.

Microsoft, meanwhile, is advertising that the move to vNext will be very easy because it can be installed via an in-place update over Exchange 2019. However, if you also have to upgrade Windows Server at the same time, then an in-place update for the OS on an Exchange machine will not be supported.

Exchange 2016 users will have to take the intermediate step to upgrade to vNext via Exchange 2019. However, updating to the 2019 version is not particularly attractive for most companies because support for this version ends at the same time as for Exchange 2016. In addition, its hardware requirements are significantly higher.

Microsoft is therefore luring customers with exclusive innovations in Exchange 2019, which should bridge the long wait until 2025. These will include:

Modern Authentication: Secure logon via MFA or certificate-based authentication currently requires a hybrid environment in which Azure AD provides these methods. They will also be available for pure on-prem installations, but Microsoft has not yet announced a date.

Support for TLS 1.3: Exchange 2019 has been running on Windows Server 2022 since CU 12. This uses TLS 1.3 by default, but the messaging system does not currently support this version. Support for TLS 1.3 is scheduled to come next year.

EEMS Rollback: The Exchange Emergency Mitigation Service can temporarily close dangerous security gaps until a patch is available. Usually, its measures disable or restrict functionality. To date, admins have to reverse these manually; in the future, this will be done using PowerShell scripts.

Retaining customizations: The setup of CUs overrides settings stored in files, such as web.config or sharedweb.config. Admins must therefore save them beforehand and restore them after the update. The setup will retain custom configurations in the future (from H2 2022 or H1 2023).

Skip optional steps in the Hybrid Configuration Wizard (HCW): When re-executed, the HCW runs through all the steps whose settings were defined during the initial configuration. As a result, subsequent customizations can be lost. In the future, admins will be able to skip unnecessary steps.

Microsoft is postponing the release of Exchange Server, announced in 2020, by a whopping four years. Unlike the original plans, traditional licensing will remain; however, customers will have to sign up for SA, although it's unlikely to benefit them much.

The switch to the Modern Lifecycle Policy with open-ended support indicates that Microsoft does not foresee another major release after vNext. Rather, the company is likely to continuously develop the product in small steps, as announced for Exchange 2019 until 2025.

Microsoft has not commented on the features of vNext, but customers should not expect too much. An indicator for this could be the support for an in-place upgrade of Exchange 2019.