After a lot of negative feedback about Windows 10 1809, which the manufacturer had to withdraw due to serious errors, it is now taking a number of measures to protect users from similar experiences. On one hand, Microsoft gives users more time to postpone updates, and on the other, the release preview phase is extended.

The most noticeable change is in the Settings app under Update & Security, in which users can now receive security or quality updates and feature upgrades separately. Beginning at the end of May, Versions 1803 and 1809 will also get these new GUI controls. 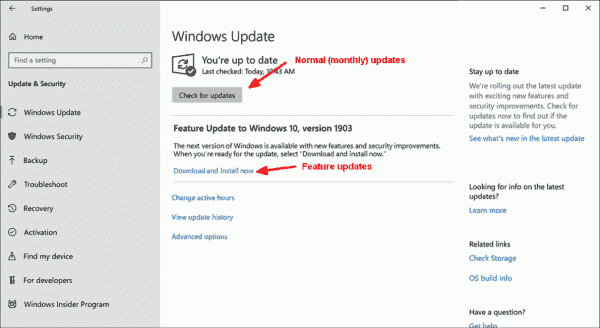 To date, clicking Check for Updates also causes new releases of Windows 10 to be installed (unintentionally) if they come directly from Windows Update and no deferral has been defined via group policies.

In WSUS environments, users might prematurely upgrade the operating system via the link Check online for updates from Microsoft Update in the Settings app. 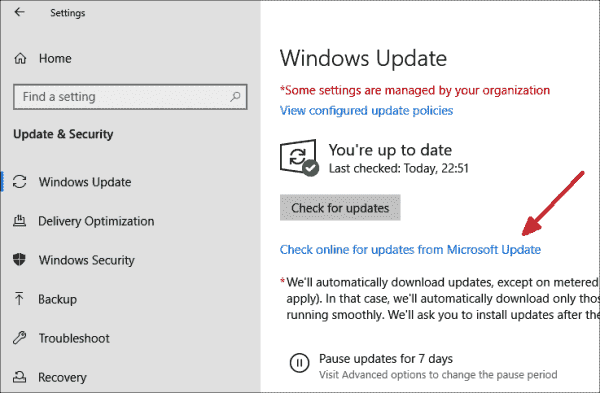 However, it can be hidden by GPO. Nonetheless, if you instead define a delay for feature updates to avoid unapproved updates, you might unintentionally activate the dual scan mode. In this case, all updates for Windows 10 are handled by Microsoft Update by bypassing WSUS.

Up to 35 days delay for all editions ^

In unmanaged environments, where users have the download and installation options available for both types of updates, they can interactively defer them for up to 35 days. At the end of every 7 days, they will receive a reminder for the update and have the option of delaying it for another week for a total of five times. 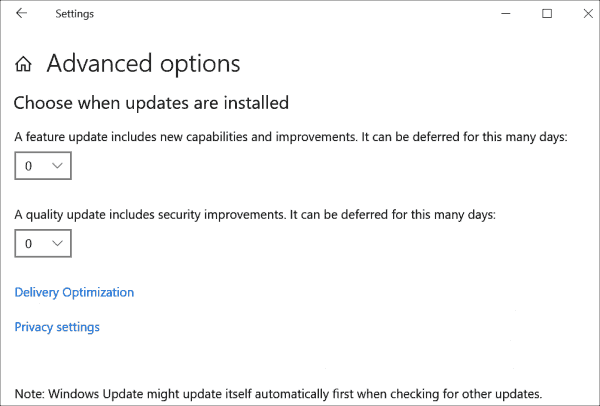 This frees users of all editions, including Home, from the need to install an update immediately after its release. This way, they also postpone the reboot necessary for the update if it is inconvenient in their current work situation. Feature updates can be quite time-consuming.

In the future, flexible active hours should also protect against an undesired restart of the computer. Until now, this period was pre-set from 08:00 to 17:00 and had to be configured either manually or via GPO. Because users often forget to adjust the hours, a reboot may occur while they are still logged on to the computer.

In version 1903, Windows 10 is able to automatically adjust the active hours depending on the user's habits. This should further reduce the number of unwanted reboots during working hours.

When organizations use Windows Update for Business to defer feature upgrades, they must also prepare for changes for Windows 10 1903. This release eliminates the Semi-Annual Channel Targeted (SAC-T) option. 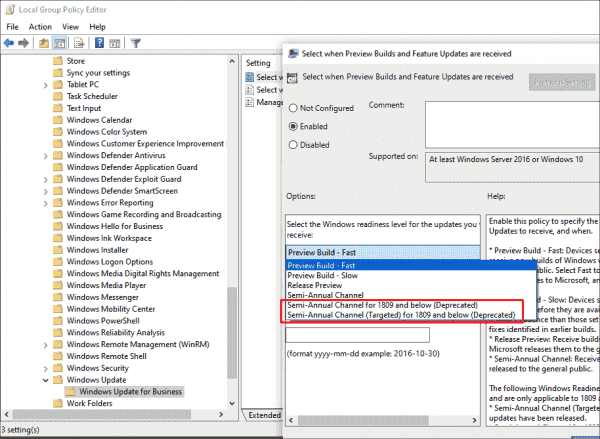 Up to now, this has been Microsoft's term for the first generally available release. On the other hand, selecting Semi-Annual Channel (SAC) caused an additional delay of at least 60 days.

From now on, every upgrade for Windows 10 will appear immediately in the SAC. From that day on, users can postpone the installation of feature updates by a maximum of 365 days.

No support when a delay is too long ^

In the past, deferring by choosing SAC plus configuring an additional number of days could cause users to drop out of the support period for the release they were using. Currently, this problem arises with Windows 10 1703 in the Pro and Pro Workstation editions, support for which ended on April 9, 2019.

If users in WUfB have chosen SAC as their channel and have configured a delay of more than 273 days for the next feature update (in this case, 1803), which appeared in SAC on July 10, 2018, then the upgrade to 1803 will not take place until after April 9. WUfB does not check whether the delay of feature updates is beyond the support period.

Service deadlines for Windows 10 in various editions and service channel

This situation will be repeated with the subsequent upgrade, because version 1809 did not switch to SAC until March 28, 2019. If you postpone your installation by the maximum period of one year, you will be past the end of support date for Windows 10 1803, which is on November 12, 2019. This also does not apply to the Enterprise and Education editions, because they are supported one year longer (30 months in total).

This problem will no longer occur in the future due to the omission of SAC-T, because the clock starts ticking as soon as a feature update is released. With a support period of 18 or 30 months and a maximum delay of 365 days, this limit can no longer be exceeded.

Users who have obtained an additional time buffer by selecting SAC in the past would immediately lose it when updating to Windows 10 1903 because the official release appears immediately in the semi-annual channel.

Microsoft mitigates this effect by granting an additional 60 days beyond the configured delay. Starting with version 1909, this should no longer be the case.

The removal of SAC-T also has consequences for those companies that distribute feature updates via WSUS or SCCM. They receive an upgrade simultaneously with all other channels, including WUfB or the Volume Licensing Service Center, immediately after a new version is released.

When using such a centralized solution, the administrator remains free to schedule the time of installation. Therefore, the elimination of SAC-T has no significance here.

This way, the administrator also assumes responsibility for distributing the upgrade in good time before the end of support for the current version. And this date has always been identical for SAC and SAC-T.

Officially, the next release bears the version number 1903, but it will not be released until the end of May. Therefore, Microsoft also refers to it as the May 2019 update.

The reason for this delay lies in the extension of the release preview phase. During this period, Microsoft and hardware and software partners will be using the new version in production. Therefore, use of machine learning should also find rare errors that have serious consequences, like the data losses in 1809.

On the basis of the data collected during release preview, Microsoft is able to determine on which computers an upgrade will probably function smoothly and on which it could cause problems. When rolling out the upgrade via Windows Update for Business, Microsoft will prioritize the former.

In order to give users more insight into the distribution of an upgrade and the difficulties involved, Microsoft will extend the update history on its website to a Windows Release Health Dashboard.