Paul Schnackenburg  Wed, Feb 19 2014Wed, Feb 19 2014  monitoring, system center  1
While this recent mantra of Microsoft to deliver new versions of their on-premises software more frequently can be hard to keep up with for the IT department it’s good to know that there aren’t any revolutionary changes in the products. System Center 2012 R2 Operations Manager (SCOM 2012 R2) integrates deeper with VMM, comes with a new agent, deeper developer integration, System Center Advisor built in and better cloud monitoring. 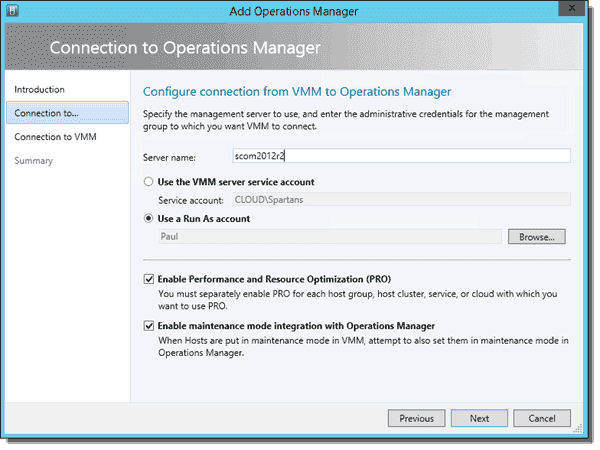 The key to System Center is definitely the integration between the different components – make sure you take the time to link each component to the others – it’ll definitely pay off in the long run.

In earlier versions it was recommended to integrate SCOM and Virtual Machine Manager (VMM) for monitoring of virtualization hosts and VMs. This integration is now deepened with the Management Pack for SC 2012 R2 VMM Dashboard which is imported automatically as part of the process of linking SCOM and VMM. This gives you a Fabric Health Dashboard which shows the state of your hosts, storage (file shares and LUNs that are under management by VMM) and network devices (if network monitoring is enabled in SCOM). This can also be scoped to either physical or virtual resources and even to a particular tenant of your clouds. There’s also a diagram view that can show your entire environment. 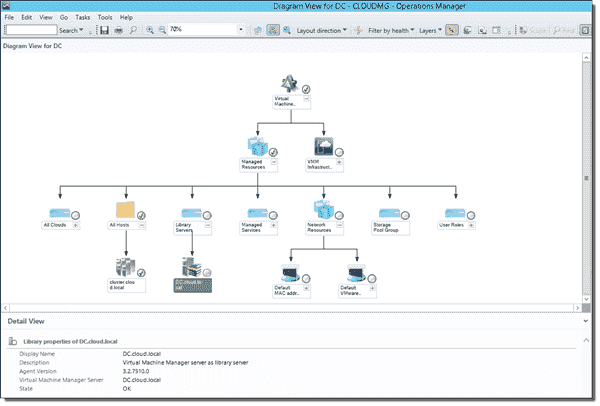 The power of SCOM to show diagrams of how your environment is connected is invaluable – especially for new staff to see “how it all works”.

The key to most SC applications are their agents and this is particularly true of SCOM, without an agent installed on a particular machine your monitoring becomes very limited. New in this release is the Microsoft Monitoring Agent (MMA) which replaces the SCOM agent and can be used standalone without an SCOM server to talk to. MMA combines Application Performance Monitoring (APM) with IntelliTrace for Visual Studio and you can use PowerShell to control the agent. The APM performance events can now be opened from Visual Studio as if they were IntelliTrace debugging sessions.

One of the big ticket items in SCOM 2012 was the ability for IT Pros to use APM to track down issues in application code and then forward these problems to developers and have it show up in Team Foundation Server (TFS). R2 takes this further with synchronization of SCOM alerts and TFS work items. Any alert assigned by IT to a developer show up as a new work item in TFS, there are two new alert fields (TFS Work Item ID and TFS Work Item Owner) which might require some rework if you created alert views in SCOM 2012 that uses the old Ticket ID and Owner fields.

If you’ve got Java applications the monitoring is now deeper and getting closer to the richness that APM offers for .Net applications.

While SCOM is all about monitoring the current state of your environment and reporting on the history of it, System Center Advisor is a free service that provides proactive guidance for Windows, SQL, Lync and Exchange Servers as well as Azure. We looked at SCA a couple of years ago and while the service now covers many more server platforms the idea is still the same: compare your configuration to existing support data gathered by Microsoft and assist you in troubleshooting issues.

New in this version of SCOM is the Advisor Connector that surfaces SCA alerts in the SCOM console (where they really should have been since day one), negating the need to go look in a separate console.

This was introduced several versions ago (with plastic pigs with wings no less) but this version uses the Open Management Infrastructure (OMI) open-source CIM Object Manager which is built into recent builds of the Linux kernel. This obviates the need to install separate agent software – something that future versions of Windows could learn from, especially now that the agent is stand alone.

Scalability is improved, the maximum number of objects per management pool in 2012 was 100,000, the R2 version takes that number to 150,000. If you’re looking for a Highly Available SCOM 2012 R2 solution this guide is invaluable. PowerShell 4.0 is supported.

If you’re looking to upgrade you have to be on SCOM 2012 SP1 and if you’re working out which versions of Windows Server are supported take a look here.

For those IT Pros who dabbled with the Visio Authoring Tool to create their own MPs this has now been replaced with (another) free tool called MP Author, read more here. If you’re planning or starting an SCOM 2012 R2 implementation your best friend is the survival guide wiki which can be found here. 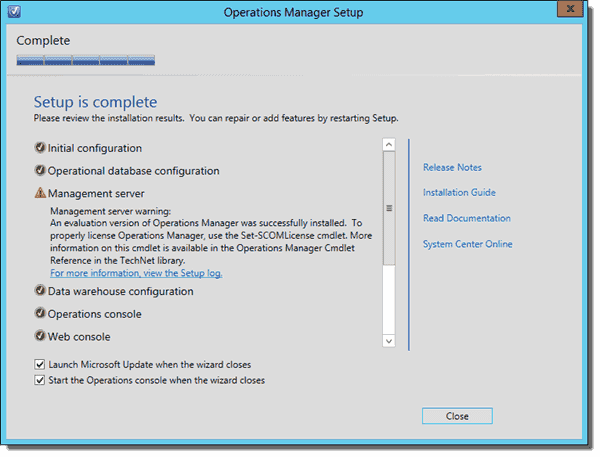 The installation of SCOM is fairly straightforward, as long as you’ve got all the prerequisites in place. Don’t forget to add the license afterwards in PowerShell – including restarting the server.

System Center is a key cornerstone of the skillset a (Windows) IT Pro needs today and if your company is considering a private cloud implementation with Windows Server you’ll definitely need SC. SCOM is one of the more important pieces to bring an efficient and managed infrastructure to light. If your business is on SC 2012 SP1 the upgrade should be a natural next step, if you’re on an earlier version consider a side by side migration because you’re going to want to implement a lot of these new features - they’re going to make your life as a sysop easier.