Joseph Moody  Fri, Apr 10 2015Thu, Apr 9 2015  deployment, desktop management, systems management  0
The MDT 2013 Update 1 Preview and ADK version 10041 release allows you to deploy Windows 10 in a test environment. In this guide, I will cover new features in this Preview and the steps needed to make them all work together. In addition, I will explain how to cope with the “ADK is not present” error message.

Last month, Microsoft released Microsoft Deployment Toolkit 2013 Update 1 Preview. Any IT administrator curious about Windows 10 deployment should be very interested in this update. First, let’s talk about additions in this update; then, we will cover how you can get everything working with the latest Windows 10 build. 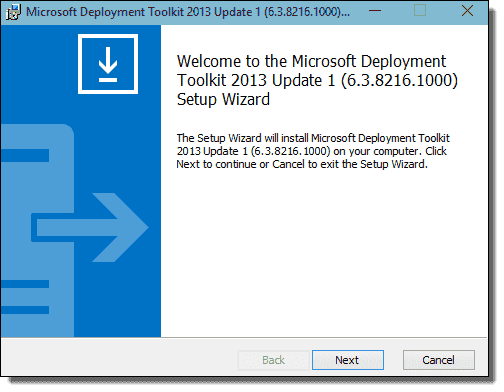 The biggest feature is Windows 10 support for Lite Touch Installations, along with an updated Windows ADK. Tasks, such as Roles and Features installation, have been updated to support Windows 10.

The MDT Team highlighted three other changes. The first is revised logic in scripts. This was done to prevent Windows versions from being read out of order. Aaron Czechowski, who posted the MDT blog update, used the version check example ("10" !> “6” but 10 > 6) to show how string comparisons were changed to integer comparisons. The GetMajorMinorVersion ZTIUtility function was introduced with this change.

The final large change occurs in the Deployment Workbench. The components node has been completely removed. This welcome change will save many new MDT users from fruitlessly downloading components that they do not need.

Johan Arwidmark highlighted additional changes not mentioned in the MDT blog post. The most notable include a new task sequence engine. The previous engine is from the SCCM 2007 era. The new engine comes from SCCM 2012 R2.

The MDT had an issue with the Windows 10 build numbers. The Windows 10 Technical Preview used a five-digit build number, which caused quite a few bugs. Thankfully, the MDT Team quickly released a fix. We are going to go through the installation process and apply the needed MDT fix.

Start by downloading the MDT preview from the MDT Connection Portal. Choose your version and install it. Don’t launch it yet. If you do, you will receive this error message:

ADK is not present - The Assessment and Deployment Kit (ADK) is required for interacting with deployment shares. Please install Windows 10 ADK.

The Windows 10 “ADK is not present” error message

Note: the ADK setup for this version is currently linked here. This link may break with future updates, though.

Congratulations. You’ve completed the needlessly difficult task of installing the correct version of the Windows ADK.

In a nutshell, download the MDT1503 zip file and extract the contents into the folder where MDT is installed (by default: C:\Program Files\Microsoft Deployment Toolkit). Overwrite any existing files.