I've used Altaro VM Backup for quite a few years. In fact, to get up to speed with the software if you're unfamiliar with it, please preread the following related 4sysops blog posts I wrote:

VM Backup handles DR for Microsoft Hyper-V and VMware ESXi hypervisors in exactly the same way. You can back up and restore to or from another site or the cloud. You can perform trial VM restores, or you can granularly restore individual files or Microsoft Exchange mailbox contents.

You can use an optional cloud management console to centralize your VM Backup infrastructure.

The default administration tool is a Windows Presentation Foundation (WPF) desktop application known for its speed and intuitive user interface; I show you a screenshot in the next figure. 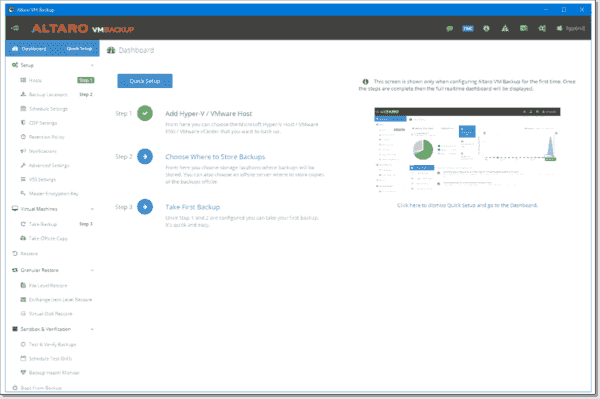 One downside to restoring entire VMs is recovery point objective (RPO). If you backed up the VM last night at 11:00 p.m. then the restore you perform this morning at 11:00 a.m. involves potentially 12 hours of lost data.

Enter Altaro Continuous Data Protection (CDP). This new feature, available only for Hyper-V workloads as of this writing in May 2018, allows you to back up VMs as frequently as every five minutes. Obviously, this has a tremendous positive effect on your RPO metric. I show you the interface in the next screenshot: 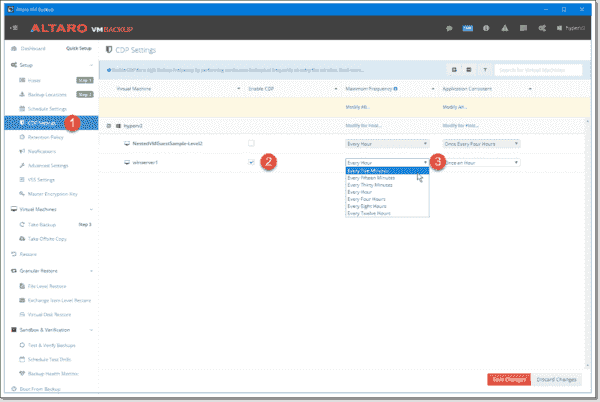 Once enabled, CDP takes incremental restore points at the interval you specify. Of course, during a VM restore operation, VM Backup applies the restore points transparently. There is nothing special you need to do outside of specifying normal restore options.

In VM Backup v7.6, we can now configure retention policy such that when a backup reaches its retention limit, it initiates GFS archiving using the following defaults:

Once again, I show you the UI in the next screenshot. 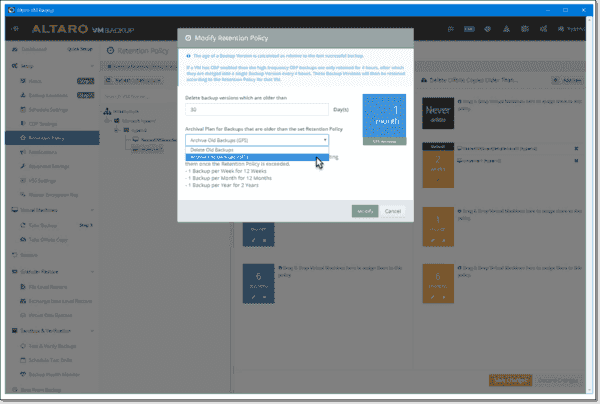 As shown in the following screenshot, you enable CBT v2 in the management console from the Advanced Settingspage. 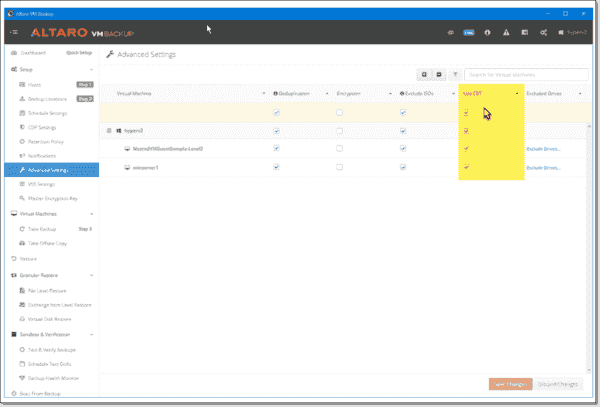 Concurrent operations on a single VM ^

As described in this Altaro knowledge base article, previous versions of Altaro VM Backup used serial processing for VM operations. This meant that, for example, an offsite copy to an Azure storage account could block scheduled backup or restore operations you need on that VM.

I'm sure that this new "concurrent operations" feature makes a lot of Altaro's customers very happy.

As you probably know if you are already an Altaro VM Backup customer, upgrading to v7.6 means uninstalling your current version and running the new installer. Doing so retains your application settings, and your backups will be untouched.

Be aware that the management console doesn't run on Windows Server Core, and that two new management ports are required: TCP 35221 for Hyper-V environments and TCP 35106 for VMware environments.

If you are a new customer, you should know that your license cost includes one year of support and upgrades. For what Altaro calls "micro businesses," you can use the Free edition permanently at no charge.

The Free edition has the following features and limitations:

My industry friends who do disaster recovery for a living tell me they like Altaro VM Backup because they have a single learning curve to handle both Hyper-V and VMware environments. Finally, my friend Mike Robbins wrote a nice blog post outlining how to manage Altaro VM Backup with PowerShell.