Vladan Seget  Fri, Oct 1 2021Fri, Oct 1 2021  virtualization, vmware  0
VMware recently announced the latest version of vSphere 7 Update 3. This version is an evolution of a rather complete and polished product suite from VMware. There are many small enhancements and updates with a few innovations that will make your applications run faster.

vSphere 7 Update 3 also offers better integration with other products, especially NSX, which now enables vSphere admins to be more productive and have a single point of control via the vSphere client when working with NSX workflows and networking.

Let's have a look at some of the enhancements added to vSphere 7 U3. I can't cover them all, but I will outline the most important new features.

New server hardware with NVMe SSDs has been around for a while, but the protocols used for storage networking are still rare in practice. With vSphere 7 U3's native integration of NVMe over TCP, you'll be able to use traditional standard ethernet NICs to hook your NVMe array to vSphere.

Of course, the support for Fibre Channel host-based adapters (HBA) and RDMA-capable NICs has not changed, but the fact that it is now also possible to use traditional NICs is a big step forward in the democratization of this technology for vSphere admins. 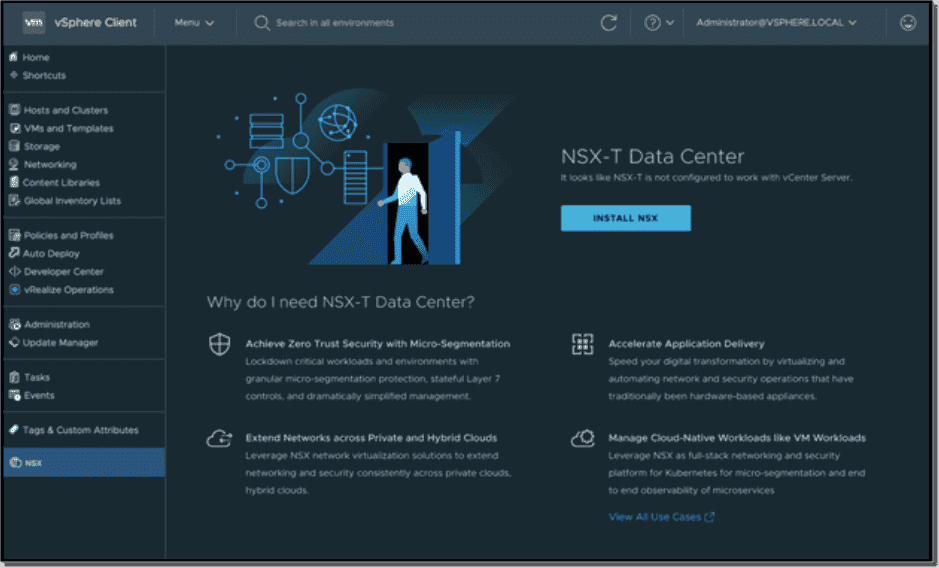 This feature is very useful when tracking potential bottlenecks. It is accessible directly in the monitoring section of vSAN.

As you know, storage is always one of the first things to check when your workloads are running slowly. But when using shared storage, the culprit might not only be on the storage side, but also in the communication in between. This can be a storage network, HBA, or disk group.

You can visualize the data path in the vCenter Server UI and the latency for reads and writes. Admins can have detailed granular tracking of their I/O profiles for selected virtual machines (VMs). 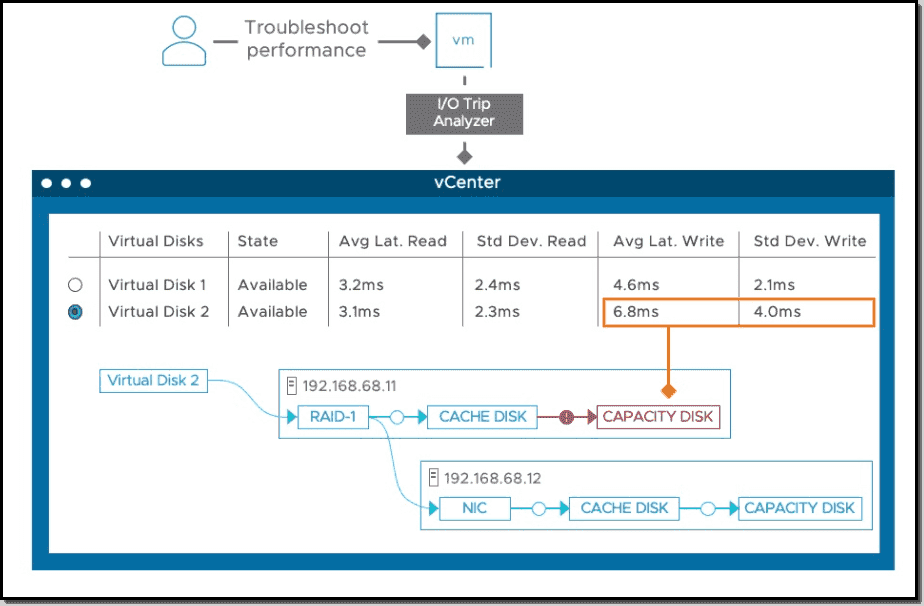 VMware IO Trip Analyzer for vSAN in vSphere 7 U3

This feature is compatible with vSAN 7 U3 storage only, so you'll only be able to monitor this type of storage.

The Distributed Resource Scheduler (DRS) has become smarter, particularly on large workloads that are costly to move. When you have DRS kicking in to move very large VMs or VMs with a lot of I/O, vMotion operation consumes a lot of network bandwidth, a lot of CPU power, and takes time to complete.

Previously, DRS moved VMs during maintenance operations to different hosts without taking the workload or the configuration of the VMs into account. Now, with vSphere 7 U3, a large VM running on a particular host is moved only once and then stays on that host, which has already been upgraded. There is no need for it to move again. Large VMs are moved as little as possible.

vSphere DRS keeps track of workloads that are difficult to move. If there is a failure when hosts are put into maintenance mode, the system retries several times before giving up. Maintenance mode now has better logic.

vSphere cluster services (vCLS) VMs were introduced in vSphere 7 Update 1. These agent VMs are mandatory when DRS is activated on your cluster. VM names are simple numbers in parentheses. The problem in that version was that when you had several clusters, the VMs were identical from the UI perspective. In addition, you could not define where those VMs should run.

vSphere 7 U3 has introduced unique identifiers (UUIDs), so each of the VMs is unique from the vCenter perspective. This means there are no longer parentheses, either.

Agent VMs now have anti-affinity rules, allowing you to determine the hosts where vCLS VMs won't run. In practice, you must create a compute policy and tag the VM(s) that you don't want to run together with the vCLS VM. The vCLS scheduler separates the VMs into different hosts.

Other vSphere 7 U3 enhancements ^

vSphere now supports the vSAN stretched cluster architecture for Kubernetes clusters. Previously, you could only run traditional VMs in this case.

A full vSAN graceful cluster shutdown is now simplified by halting all the data and the control/management plane in the desired state. There is new intelligence built in with new prechecks when you are about to shut down your vSAN cluster.

Precision Time Protocol (PTP) enhancements—PTP was introduced with vSphere 7 U2 and improved with U3. VMware has added an option to configure where you can set NTP as failback if PTP isn't available. You can still have time services, even if PTP is momentarily unavailable. 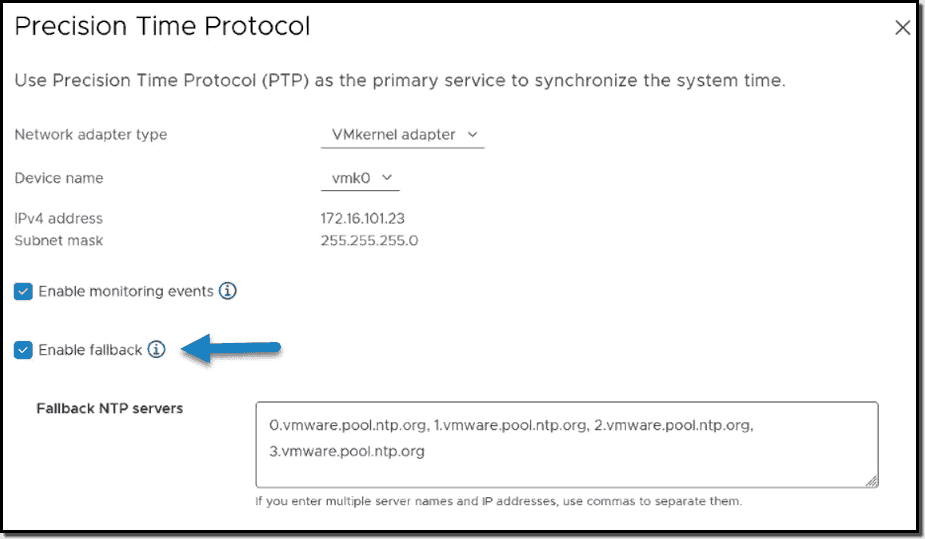 PTP now has fallback to NTP

Virtualization-Based Security (VBS) AMD support—While Intel-based VBS with Microsoft Device Guard and Credential Guard was supported a while ago, ADM support is new in Update 3.

Phasing out SD cards for ESXi installations—Since SD cards are less reliable than flash devices, VMware is making a move to SSD, making it harder to install new versions of ESXi to SD cards. SD cards have lower endurance and reliability, and they have more issues over time compared to flash.

As you know, flash devices have garbage collectors that allow deactivating dead bits on the device. They also come with additional unused capacity that is freed as the device accumulates writes over time. Thus, if capacity becomes unavailable due to failures, the overall capacity remains the same until the spare capacity is used up.

This and other reliability features built into flash devices mean VMware can start deprecating SD cards as boot media. Starting with U3, you'll see a warning message that the device is in degraded mode, which means that VMware ESXi limits the writes to the device.

vSphere 7 Update 3 offers more efficiency, resilience, performance, and various new features. Since the vSphere 7.0 GA release, the product has evolved with updates that offer more value to administrators and are easier to use.

As VMware is still acquiring new products and technologies, each version of vSphere has to catch up on those acquisitions or innovations by integrating some of them into vSphere. vSphere 7 Update 3 will be available for download from this page soon.