SEV-ES is a hardware technology found in AMD CPUs. In general terms, it allows the guest operating system's memory and register state to be encrypted. It protects against access from the hypervisor, in this case, ESXi.

AMD's SEV-ES architecture is made possible by the following solution components:

Is this an AMD-only technology? Currently, AMD SEV features are available with their entire line of AMD EYPC processors. Intel does have an equivalent technology called Intel Software Guard Extensions (SGX). However, this new equivalent feature is not yet available in most Xeon processors. This means that AMD currently has the upper hand in implementing SEV features for virtualized environments such as VMware vSphere.

Keep in mind that Secure Encrypted Virtualization-Encrypted State needs to be enabled in the system's BIOS settings. Each vendor may implement this differently, so be sure to refer to the manufacturer's documentation for this information. After this is enabled in the BIOS, you can add the SEV-ES instructions to a virtual machine. To turn on this feature while creating a new virtual machine using PowerCLI, you can use the following cmdlet:

With vSphere 7.0 Update 2, VMware has extended the SEV-ES capabilities to include containers, specifically Confidential vSphere Pods. The new vSphere Confidential Pods use the AMD SEV-ES technology to provide the same security capabilities for containers that is available with virtual machines in vSphere 7.0 Update 1. On a Supervisor Cluster in vSphere with Tanzu, they allow keeping guest operating system memory encrypted and protected against the hypervisor accessing protected memory space.

The world of cybersecurity is all about security "layers." The new SEV-ES feature provided by Confidential vSphere Pods provides an extra layer of protection for modern workloads running on top of vSphere with Tanzu. SEV-ES security prevents leaking information in registers to components of your infrastructure, such as the vSphere hypervisor. In addition to protecting this space, it can also detect malicious modifications to a CPU register state.

So, how is this new feature deployed with vSphere with Tanzu? There are a few prerequisites to note before deploying the new Confidential vSphere Pods. These include the following:

Using VMware's official documentation, you can enable the Confidential vSphere Pods feature using the example YAML file provided. The following YAML file can be customized. However, note the sections in bold. The first section under the annotations configuration allows "turning on" the Confidential vSphere Pods feature. VMware notes that the memory requests and memory limits must be set to the same value.

After creating the Confidential vSphere Pods YAML file, there are three more steps involved for deployment. These steps include:

The next step is to log in to your vSphere with Tanzu Supervisor Cluster. To do this, use the following command:

Change to the vSphere with Tanzu application namespace

Next, you will change to the vSphere with Tanzu namespace where you want to deploy the application. To do this, use the command:

Use the YAML file to create the Confidential vSphere Pod

Using the YAML file created earlier, you can now deploy the file to provision the Confidential vSphere Pod.

Verifying the state of your vSphere Confidential Pod

To verify the state of the vSphere with Tanzu Pod and that it is configured as a Confidential vSphere Pod, you can view the pod metadata in the vSphere client. You should see the following in the encryption mode for the Pod. 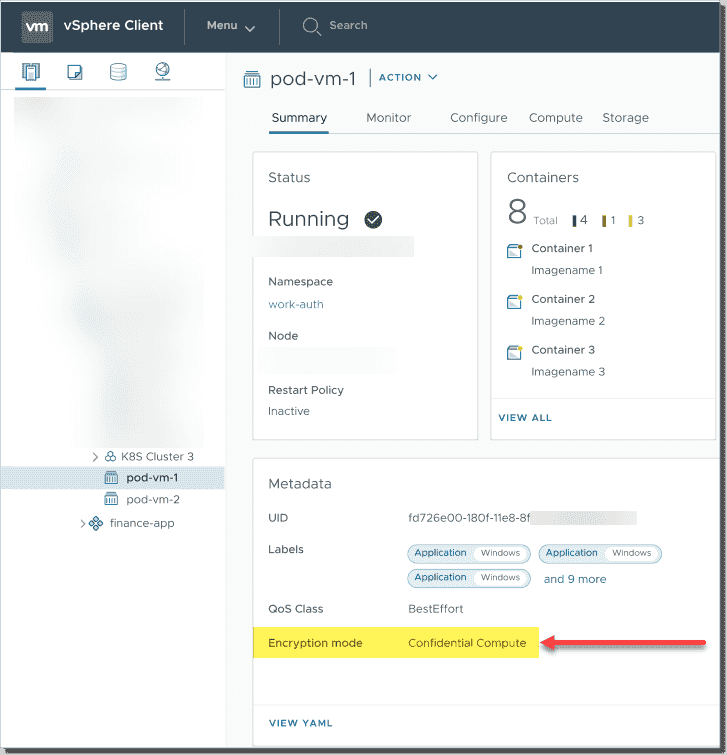 Verifying the encryption mode for the vSphere Confidential Pod

VMware has made great strides with vSphere 7.0 Update 2 in the realm of security. They are using the available technologies from a hardware perspective, which will enable customers to provide additional layers of protection for mission-critical and sensitive workloads. With the new Confidential vSphere Pods feature, VMware is bringing the capabilities of the SEV-ES technology to containers. Now, VMware customers running vSphere with Tanzu workloads can have the same benefits for Kubernetes pods as was extended to virtual machines in vSphere 7.0 Update 1 using SEV-ES.