Michael Pietroforte  Mon, Apr 13 2015Sat, May 28 2016  azure, cloud computing, nano server, windows server, windows server 2016  4
Microsoft announced Nano Server, a server OS with no GUI, no local CLI, no Remote Desktop support, and no local logon prompt. Whereas many commentators see Nano Server as just a new server option for the cloud, I believe that Microsoft is about to enter a new age in server computing.

In a way, Nano Server just looks like a further stripped-down version of Server Core. I think it is safe to say that Server Core was a failure, at least when it comes to cloud computing. Not even Azure offers a Server Core image. You first have to install a “full” Windows Server and then remove the GUI stuff. After that, you can adapt the size of your virtual machine. Of course, this is exactly how you don’t want to deploy servers in the cloud.

Nano Server will lack the GUI stack, 32-bit support (WOW64), and MSI support. You can’t log on via Remote Desktop, and you can’t log on locally—that is, there is no local command-line interface, and there is no PowerShell console.

The benefits of Nano Server are obvious. Of course, the main point about Nano Server is that you only have to install what you really need. It has a truly nano-scale footprint. According to the announcement, even Server Core appears to be bloated:

This minimized footprint improves resource utilization and security. It also simplifies administration significantly. Things that aren’t installed don’t have to be managed, and they can’t break your system. You probably heard the stories about buggy audio drivers that prevented Windows servers from booting up.

However, in my view, the main benefit of Nano Server is that it was built for automation. Imagine that you have to deploy a few hundred or a few thousand servers. All you have to do is define each state with PowerShell DSC and hit the button, and your servers will be up and running and will stay in your desired state.

Nano Server also fosters the new “cattle model” in server computing. You no longer treat servers like pets and worry if one of them goes down or malfunctions. You just kill the server, and your infrastructure keeps running unaffected. The broken server is automatically replaced with a new virtual machine.

Automation and cattle computing works best if your servers are almost identical and have a small footprint. If you automatically deploy servers (say, because an entire rack is down or because a higher demand requires more performance), you don’t want to push around bloated Server Core VMs.

The future of Windows Server ^

Obviously, Nano Server was built for the cloud. But what about the vast majority of Windows Servers that still run in server rooms with a handful of machines? Will small and mid-sized organizations that still cling to on-premises computing have to deal with a server OS where you can’t even log on locally? I believe they will. In the future, Nano Server probably won’t be just a server option.

I came to Microsoft 15 years ago wanting to change the OS and change the world. Nano Server is a dream come true.

It seems that Nano Server will at least change the Windows Server world. It is interesting to note that “Windows” does not appear in the brand name. Nano Server is not just a stripped-down version of a full Windows Server. It is something new. It is what Server Core wanted to be. It is the true core of Microsoft’s server operating system in the future.

In February, Jeffrey Snover outlined Microsoft’s server roadmap. In the presentation, the diagram below appeared. 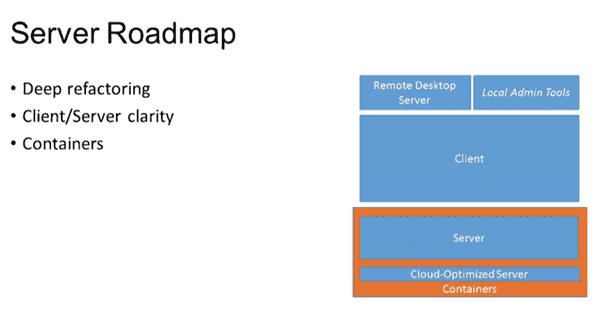 I think he didn’t mention Nano Server in the presenation, but the position of the “Cloud-Optimized Server” in the diagram shows how Microsoft’s future server operating system will be structured. You’ll also notice that the term “Windows Server” doesn’t even appear in this diagram about Microsoft’s server roadmap. Of course, Microsoft won’t give up the GUI completely in its server OS. In the diagram, the “windows” are hidden in the Client box.

Snover’s main concern about Windows Server is that no clear distinction between the server and the client exists. Thus, in the future, if you really feel the urge to log on locally and manage your server with a GUI, you will have to install a “Windows Client” on top of the Server. Perhaps I am reading too much into this diagram, but it will be interesting to see if Microsoft’s name of its next server OS will already omit “Windows.”

Another interesting part in the diagram is the role of containers in Microsoft’s server OS. We’ve known for a while that the next Windows Server will support Docker. In another announcement, Microsoft confirmed that you will be able to run Docker in a Hyper-V environment. Hence, two types of containers will exist: Windows Server Container and Hyper-V Container. The Docker engine runs on top of those two containers.

In this diagram, at least, the term “Windows Server” still appears. I suppose there are still forces in Microsoft who can’t let go of the windows so quickly.

Thus far, this is all theory based on announcements and presentations. We will only know what Nano Server really is and what role it plays in Microsoft’s next server OS (I am already trying to omit “Windows”) when the first previews are out.

Nevertheless, it is obvious that fundamental changes are happening in Microsoft’s server world. What does this mean for Windows admins? Jeffery Snover’s advice (at about 30:45 in the interview) for IT departments makes it all clear:

Make yesterday the last day that you ever hired a click-next admin.

So are you a learner, an automator, and a tool builder who respects reality?