Let's dive a bit deeper into each of these new features and see how they expand on the features NAKIVO Backup & Replication already offers.

Tape backup is still a very viable backup media still in widespread use by many organizations. Tape media still provides resilient and cost-effective storage for long-term backup used for archival purposes. While the cost per gigabyte of disk has dropped dramatically over the past several years, tape is still cheaper storage per gigabyte.

This is largely because we can separate tape from the device used to write it. You can have hundreds or even thousands of tapes and only one or two tape devices to write to and read data from. Additionally, the power and cooling used to maintain disk storage alone amounts to a dramatic cost for disk media. For very large quantities of data you need to store long term, tape is still the choice for many.

As you can see below, you now have a new Tape menu under Settings. Under the Tape menu, you can add a tape device and manage your tape cartridges and backups. 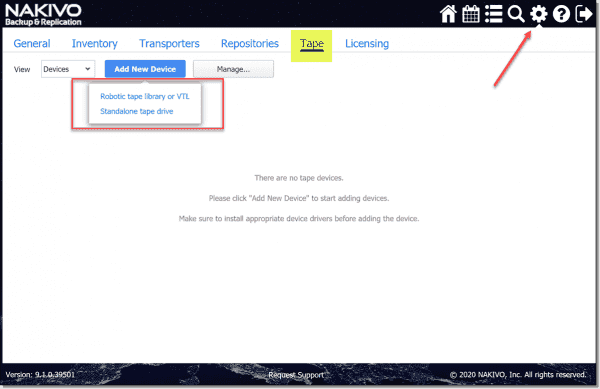 With its tape-management capabilities, NAKIVO Backup & Replication v9.1 allows IT admins to manage tape backups and also the tapes themselves. This includes managing the cartridges, locations, and contents of the tape media. This is essential with tape because you must know which cartridges you need to restore a virtual machine (VM) to a specific point in time. NAKIVO provides all of these tape management capabilities to the IT admin with the v9.1 release.

With the previous release, NAKIVO introduced the ability to back up physical Windows servers. It is a natural progression with this release that NAKIVO would include physical Linux server backup. Physical servers are still very much a part of enterprise IT infrastructure. Many applications may not be able to run inside a VM. This could be due to physical server connections or extreme performance requirements.

Whatever the case, physical servers running workloads still require protection in the enterprise data center. These can include both Windows and Linux servers. Now, with the release of NAKIVO Backup & Replication v9.1, enterprises can protect both types of workloads effectively.

Under Settings > Configuration > Inventory, you can now add a Physical machine and select either Windows or Linux. Once you have added the physical resources, you can then create backups and so on. 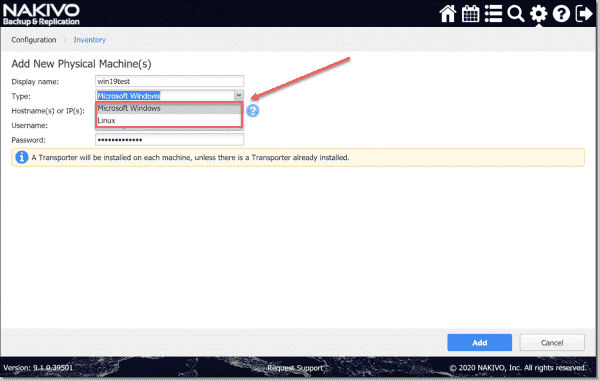 With NAKIVO Backup & Replication v9.1, you can now protect these devices using the same backup solution you have for protecting your other physical and virtual resources in the data center. It allows restoring files and folders to your physical Windows workstations as well as restoring these to VMware vSphere or Hyper-V VMs.

One critical part of any effective disaster recovery plan is testing your backups. Admins overlook this all too often in many environments. NAKIVO has enhanced their backup verification process with what they call instant verification.

With instant verification, NAKIVO boots VMs and replicas using the flash boot feature (booting directly from backups) without networking turned on. It verifies availability of either VMware Tools or Hyper-V integration services to receive the OS heartbeats. This ensures the VM is bootable and functioning properly.

This takes the heavy lifting out of the process to verify the integrity of your backups and make sure you can count on them in times of disaster. This helps catch any issues with backups before you have to use them. In NAKIVO Backup & Replication v9.1, under the Options menu, you can select Screenshot verification or Boot verification underneath the VM Verification menu option. 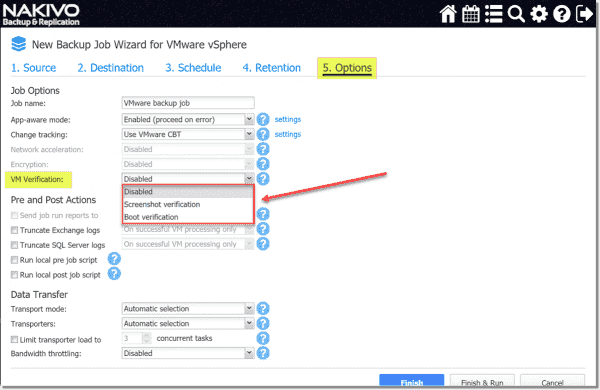 NAKIVO Backup & Replication v9.1 builds upon the same tried-and-true platform it has greatly extended over the past several releases of the product. This newest release adds great new core features to the product, including native tape management as well as physical Linux server and Windows workstation backup functionality. The instant verification with boot verification feature helps improve disaster recovery and backup testing.

With even more efficient backups and improved verification capabilities, this is the most powerful version of NAKIVO Backup & Replication yet. You can download the latest release as a self-contained Linux appliance that lets you deploy the solution and create your first backup in minutes. Be sure to check out the fully featured trial version of NAKIVO Backup & Replication v9.1 here.