The world of backup vendors in the virtualization space is certainly a crowded one with many names and solutions that come to mind. NAKIVO is a backup vendor that has been steadily and aggressively adding new features to its flagship backup solution.

Recently, NAKIVO released NAKIVO Backup & Replication v10 with some major new features. In this review, we will see how the new NAKIVO release is the most capable offering from NAKIVO to date, including its hypervisor support, physical-to-virtual capabilities, and cloud storage.

Let's take a closer look at each of the new features.

For organizations developing and architecting cloud-native applications, VMware vSphere 7 allows organizations to make use of their already familiar vSphere platform to host their Kubernetes architecture alongside their traditional virtual machine environment.

Generally, with every new VMware vSphere hypervisor release, there are API changes and other underlying architecture changes that require backup vendors to update their interaction with the platform. With the v10 release, NAKIVO customers are fully supported with the new vSphere environment.

NAKIVO Backup & Replication v10 allows organizations that want to upgrade and take advantage of vSphere 7's new features to upgrade without any roadblocks in terms of data protection. 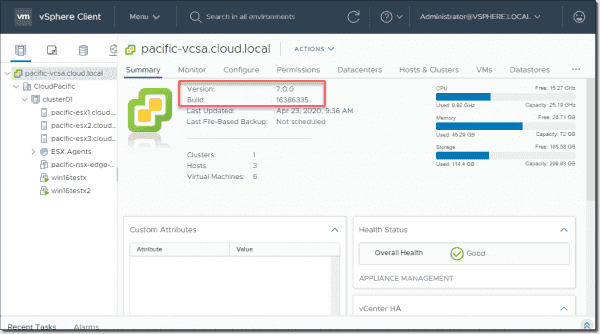 With the v10 release, NAKIVO has introduced an enhanced web UI. While not a major rewrite of the interface, it provides a welcome facelift to the previous web UI and helps to provide an improved administrative experience.

The NAKIVO Backup & Replication v10 web UI provides a more modern look and feel with a left-hand navigation blade that drives the task workflows. I have been using the NAKIVO product for a few years now. The new web UI helps me to perform the tasks required of a backup administrator more clearly and simply in comparison with the previous interface. 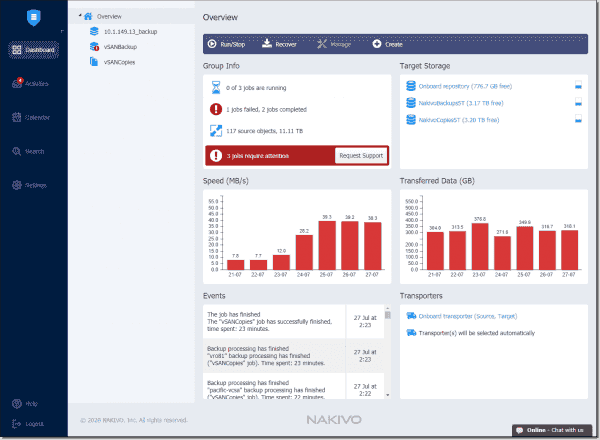 Both new NAKIVO users and NAKIVO veterans will no doubt appreciate the newly improved look of the platform and its modern feel.

NAKIVO has been working aggressively to improve their physical machine backup support since NAKIVO Backup & Replication v9.0, which included support for Windows physical server backups. Many other physical machine features and capabilities have been added to subsequent releases. These include:

With NAKIVO Backup & Replication v10, NAKIVO is adding support for Linux physical workstation backups. Many organizations have shifted to Linux across the board to minimize licensing costs and increase security, among other reasons. This new NAKIVO feature will no doubt benefit organizations that make heavy use of Linux in their environments for client workstations to protect business-critical workstations.

While NAKIVO had the ability prior to v10 to export a physical server backup as a virtual disk, the process was fairly manual. You had to export the backup as a physical disk, copy it to your virtual infrastructure datastore, create a new virtual machine, and then point the new virtual machine to the existing disk that was uploaded to your datastore.

While this previous process works, it is not the seamless process that you would want when a quick P2V is needed in a disaster recovery scenario. With this release, NAKIVO has greatly improved the recovery process for physical machines to include a much more seamless P2V operation.

New with NAKIVO Backup & Replication v10, physical machine backups can now be recovered natively to a VMware vSphere virtual machine as part of the recovery process. In addition to recovering the virtual machine, you can configure the target virtual machine hardware, including the following: 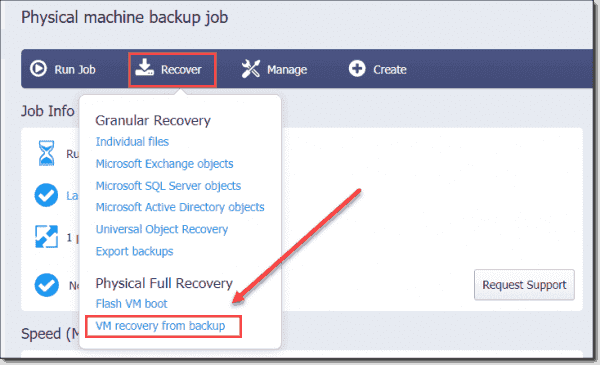 Using the VM recovery from backup for physical machine backups 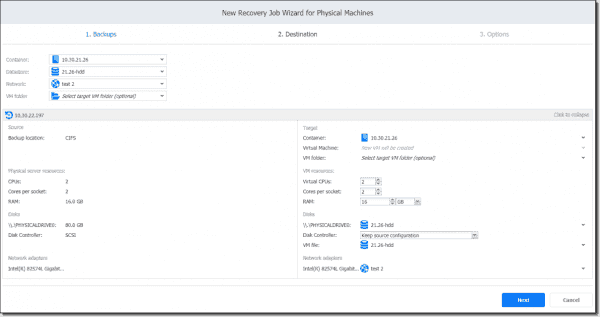 One of the huge use cases for many organizations when it comes to cloud storage is backups. As part of the 3-2-1 backup best practice methodology, organizations need to have more than one copy of their backups stored, with at least one copy offsite.

Cloud storage, specifically the cheaper cloud object storage, makes a really great, cost-effective option for businesses to leverage for storing offsite copies of their backups. NAKIVO is strengthening their ability to provide native capabilities for cloud storage in v10 with the introduction of Wasabi Hot Cloud Storage. You can now target Wasabi cloud storage with your backups and other backup operations like backup copies. 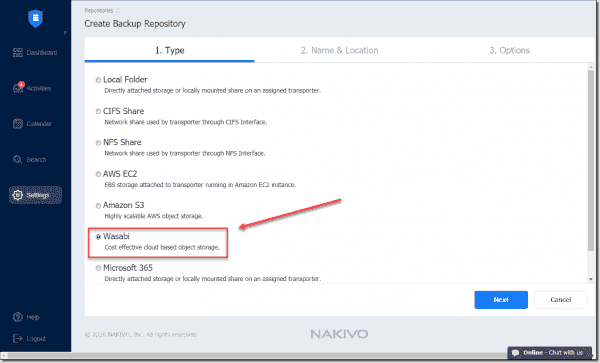 This will no doubt provide a really great option for those who may be looking for cheap, effective, easy-to-configure cloud storage for storing backups as part of their disaster recovery plan architecture.

I really like NAKIVO's aggressive release stance and addition of new features with each release. It is one of the easiest backup solutions to provision. You can literally download the virtual appliance, deploy it, and start creating the first backup of your environment in a matter of minutes.