I won't be going into detail about how it works—feel free to explore our earlier articles for that information. As a high-level overview, NAKIVO Backup provides backup with recovery points to help you recover from accidental deletions and ransomware and to ensure regulatory compliance. It also offers replication, by which VMs are replicated from one location to another to allow for fast disaster recovery.

Extensive platform support is available, covering VMware, Hyper-V, and Nutanix's AHV along with physical Windows servers and AWS EC2 instances. Add its support for a wide range of NAS storage platforms (Synology, QNAP, ASUSTOR, Western Digital, NETGEAR, and the Raspberry Pi) as backup repositories, and you will quickly see why NAKIVO has great appeal in most environments. 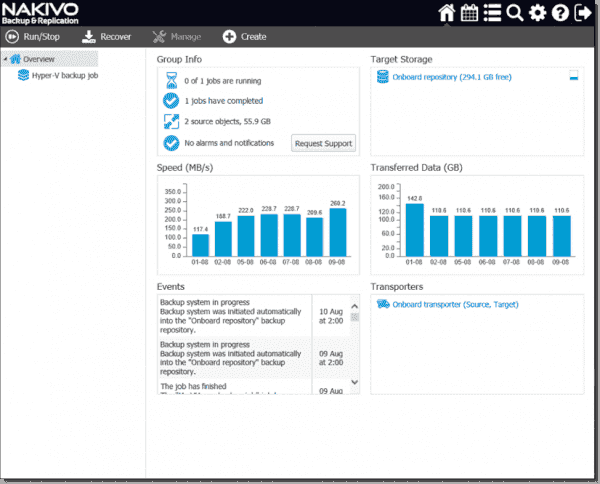 I've heard from Microsoft representatives several times that the adoption of new Windows Server releases is slow due to a lack of support from backup solutions. It's good to see that if you've chosen to use NAKIVO, you're covered if you want to upgrade to the latest and greatest Windows Server version.

Windows Server 2019 is supported as an application platform and you can protect Hyper-V, VMs and physical servers as well.

Backups on Windows Server are now application-aware (covering Exchange, SharePoint SQL, Oracle, AD, and more), and all backups after the initial one are incremental, which improves both performance and storage capacity. You can also use Network Acceleration, by which a NAKIVO Transporter installation on one end of a link (generally a WAN link) compresses and optimizes data before sending it to the Transporter on the other end. Data stored in your backup repository can also be deduplicated and compressed.

To help ensure security (and fulfil regulatory requirements), Windows Server backups can be encrypted (through AES 256-bit encryption) both when in flight and at rest. 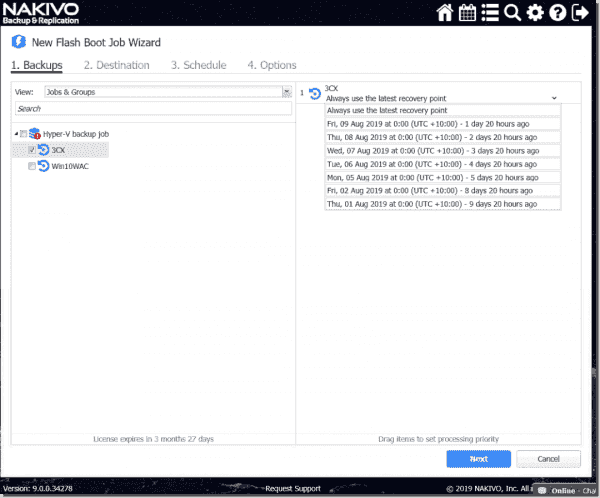 This platform is fully supported, including its ability to perform an instant VM Recovery (NAKIVO calls this process a Flash VM Boot), in which a VM is begun directly from backed-up data (without affecting the stored data) simply by pointing to the host or cluster where the recovered VM should run. This feature will come in handy if you have a business-critical VM go down and you need it back up and running again quickly.

Selecting a destination for a Flash VM Boot

You can be forgiven if you thought the NEC HYDRAstor was the newest villain from the latest Captain America movie, but it's actually a disk-based grid storage system with inbuilt data deduplication that is specifically designed for data backup and archiving purposes. It's scalable and allows you to simply add nodes to increase its capacity and performance. It comes in various hardware-based form factors as well as in virtual appliance form.

NAKIVO version 9.0 adds support for the NEC HYDRAstor to complement its existing support for Dell EMC Data Domain, HP StoreOnce, and Quantum DXi. NAKIVO's own testing, in which backups were run and stored on a HYDRAstor, resulted in a 53× boost in speed over that of the normal backup repository with a backup speed of 3.2 GB/s.

This newest version also offers a few other minor improvements, such as clear overviews of critical errors via email alerts and alarms for when the Java Virtual Machine hosting it begins to run out of memory.

I find NAKIVO Backup & Replication version 9.0 very easy to deploy and configure, and it worked well in my four-node Hyper-V cluster. The combination of data backup and replication for both data protection and disaster recovery within a single product is also appealing. The additions in this version make sense, particularly if you're looking to upgrade to Windows Server 2019 or use a NEC HYDRAstor to store your backups. I'd still like Azure to sit alongside the support for AWS EC2 instances, but maybe that will come with the next version.