Paul Schnackenburg  Mon, Jun 17 2019Mon, Oct 28 2019  backup, hyper‑v, virtualization, vmware  0
In October 2018, we looked at NAKIVO Backup & Replication 8.0; in this article, we'll dive into the new 8.5 version. Please have a look at the earlier review though—it covers how NAKIVO works, how to deploy it in large, complex networks, and how service providers can use it to provide backup as a service (BaaS).

The 8.5 upgrade adds Nutanix Acropolis Hypervisor (AHV) support, the ability to create a backup appliance on FreeNAS, Windows Server 2019 support, and automatic updating. Perhaps the most interesting addition is being able to run it on a Raspberry Pi for a portable backup appliance. The feature that lets you replicate (for disaster recovery) from your backed-up virtual machines (VMs) is also very useful. Take a deep breath, and we'll dive in. 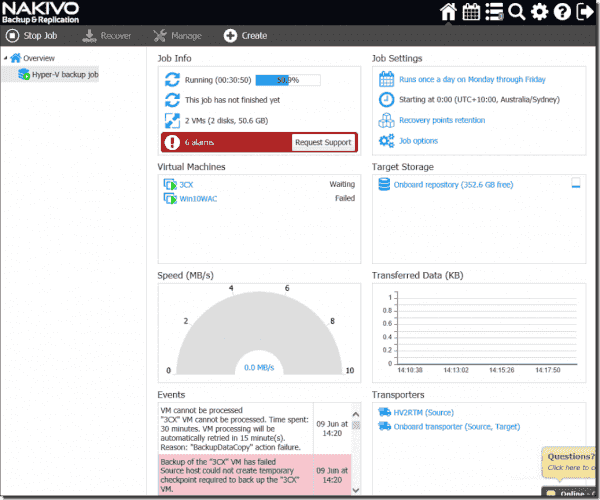 If you're using AHV on Nutanix's hyperconverged infrastructure, you can now use NAKIVO to back up AHV VMs. The backups use Nutanix Changed Region Tracking for fast incremental backups, and it's application aware for transactional consistent protection. Just like other platforms, Nutanix support offers network acceleration by compressing data sent between Transporters (NAKIVO-speak for a VM channeling backups from clusters to backup servers or appliances). It also offers bandwidth throttling for busy WAN links.

Backups are deduplicated and compressed; you can optionally encrypt them. Note that you need a Transporter to be running on the Nutanix cluster. Support for replication of Nutanix VMs isn't yet available.

This new feature makes it possible for small-to-midsized businesses (SMBs)—and their service providers—to create a NAS-based backup appliance easily with a few clicks. Download FreeNAS and set it up on appropriate hardware:

Then install NAKIVO from the app store in the FreeNAS web interface. It's the full version of NAKIVO, so you'll be able to protect Hyper-V, VMware, and Nutanix VMs, along with Amazon Web Services (AWS) Elastic Compute Cloud (EC2) instances.

This new functionality is in addition to the support already present for Synology, QNAP, ASUSSTOR, Western Digital, and Netgear NAS devices in NAKIVO.

If a full-blown NAS isn't for you, another option is to install NAKIVO 8.5 on a Raspberry Pi 3 Model B+ with at least 1 GB (+250 MB per job) memory and 16 GB free space (although you're going want a bit more to store the backups). A blog post here covers the process and thinking behind it. It certainly is a very portable solution (especially if you use a 128+ GB flash disk for storage, but even a 2.5" 1 TB+ HDD is still easy to carry). Yet I don't think it is really a business-grade solution. 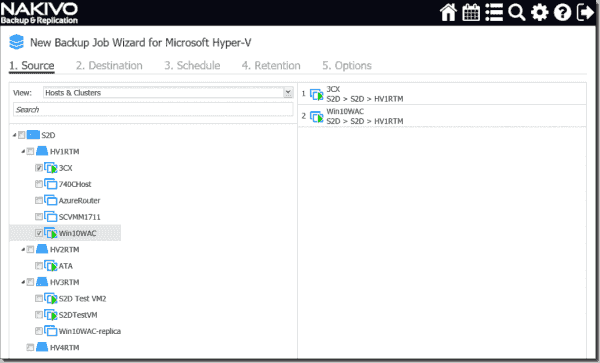 You can run NAKIVO 8.5.2 on Windows Server 2019, but curiously there's no support yet for Hyper-V in Windows Server 2019 as a source platform. The automatic update feature is a nice addition; it means a button will show up in the UI when a newer version is available. Click this button, review the release notes, and click the Download & update button. It will automatically update the Director installation first and then any Transporters connected (up to 20 in each batch). After the update, the UI will report it as completed. To me, this shows another way NAKIVO is working to make management of backup and replication easy.

I really like the combination of backup and replication in the same product—it makes perfect sense and provides both types of protection against different risks to your workloads. Up until this version, however, that necessitated running two snapshot jobs on the source VMs, adding to the load on the Hyper-V or VMware hosts. New in this version—and probably the most important feature for larger NAKIVO customers—is the ability to run the replication from backed-up VMs. This should noticeably reduce the load on your host machines and is another sign of how I feel NAKIVO is approaching data protection—making it easy to deploy and maintain.

Retention policies for a backup job

This updated version adds useful features to an already strong backup solution. Combined with easy management and configuration along with broad platform support, this makes NAKIVO a robust choice for data protection. I wish they would add support for Azure VMs rather than just AWS, but we'll see what 9.0 brings.