Timothy Warner  Mon, May 25 2015Sun, May 24 2015  fun, microsoft, nano server, powershell, windows server 2016  0
I was fortunate enough to attend the 2015 Microsoft Ignite conference in Chicago, along with 23,000 of my closest IT friends. For those of you who couldn’t make it, Microsoft made the sessions available online for on-demand viewing. In the meantime, I’d like to share with you the five key lessons I took away from the Ignite conference.
Contents 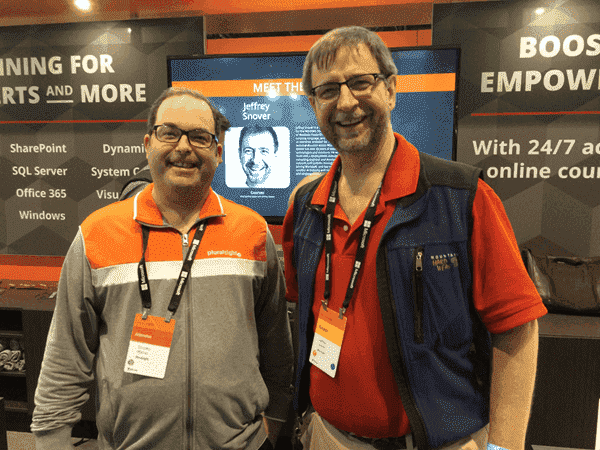 Standing with the Father of Windows PowerShell

Lesson #1: Everything’s getting revised for 2016

Those of us who work in the technical training and IT certification space have our work cut out for us over the next year, that’s for sure. The reason is that Microsoft is refreshing most of its enterprise software, and most of it will hit during calendar year 2016. Consider the following products:

You’ll note that I’m not mentioning Office 365 and Microsoft Azure; that’s because those technologies are literally in daily flux. Actually, I do want to talk a bit more about Azure...

Up until recently, it wasn’t the easiest thing to combine your on-premises Active Directory domain(s) with the Microsoft Azure public cloud services. However, with the advent of the Azure Pack, you’ll be able to manage your on-premises and cloud-based resources with a single, unified Web portal.

I say “unified” because the Azure Pack Web interface is the same as the Windows Azure one. In my opinion, the Azure Pack marks the end of System Center App Controller, which has historically been our tool for linking private and public clouds together.

For the last several years, you’ve heard “it's no longer optional to learn Windows PowerShell” and such. Let me tell you that it’s absolutely true. In case you haven’t heard, Nano Server is almost a “bare metal” Windows server box: we’re talking about a tiny disk footprint and all key programs and services running in isolated containers that borrow directly from Docker containerization technology.

Please note that you can still install Windows Server 2016 with the full GUI if you want to. The Nano micro-server is an installation option.

My prediction for 2016 is that you’ll read more about Nano Server on 4sysops than any other Microsoft enterprise technology.

As for Windows PowerShell, therein lies the secret sauce to controlling Nano. Specifically, Nano is a Windows Server installation option. There’s no more Server Core, which Windows Server Lead Architect Jeffrey Snover described as a waypoint on the road to Nano Server.

Nano has absolutely no local access; it’s a true “headless” operating system. Thus, you’ll need to use Windows PowerShell remoting to access and manage the box. In a nod to those Windows admins who are slow on their PowerShell uptake, you’ll still be able to manage Nano boxes with (remote) MMC tools and, of course, the Azure Pack management portal.

Lesson #4: The Ignite event was way too marketing-rich

One of the biggest complaints I heard from Ignite conference attendees was the lack of “meat” (which is to say, fine detail) in many sessions. Instead, attendees were subjected to hour after hour of marketing language, which in my experience doesn’t go over well with IT professionals. Windows PowerShell MVP Don Jones wrote a series of blog posts in which he critiqued the Ignite conference experience from end to end.

The huge focus on vendors and marketing made the $2,000-plus registration cost more difficult to justify. However, I more than made up for this lack of contact by networking with other IT pros. That was actually my most valuable conference takeaway, personally.

For me, my top Microsoft Ignite highlight was finally getting the chance to meet and spend time with many tech people who I’ve admired for years and corresponded with only electronically. Where else besides a place like Ignite can you hang out with industry leaders such as Mark Minasi, Daniel Petri, Jeffrey Snover, Don Jones, Jason Helmick, Jeff Hicks, Ed and Teresa Wilson, and Steve Murawski, among many, many others? That was great.

The industry contacts I made at the conference resulted in excellent opportunities for my company, for me personally, and for many friends of mine.

One more thing: whenever you attend a tech conference, you need to plan ahead and make sure you’re prepared. I’m not talking about preparing your mind for the addition of new information (although that’s a good point, too). Instead, I mean remembering to have the following items in your backpack at all times:

I hope that these takeaway lessons were useful to you regardless of whether or not you made it to Ignite 2015. What were your most important takeaway lessons? Please let us know in the comments.