The Windows Start screen is a powerful tool because it allows you to find and start apps much faster than through the Start menu and the desktop. In Windows 7, I pinned my most important applications to the taskbar and placed less frequently used apps on the desktop. I used the Start menu very rarely and only when I wanted to start an application for the first time. The main problem with the desktop is that it usually gets cluttered quickly with all kinds of icons from third-party software vendors who try to push their applications into the foreground.

One of the things I like about the Start screen is that new apps only appear at its end, so that the beginning of the Start screen stays unchanged. This allows me to locate an app very fast. My mouse has a button for the Start screen, so, in the majority of cases, I only need two clicks to launch an app. I estimate that it takes me less than a second on average to start an application from the Start screen. Considering the number of apps I work with, using the Start menu instead of the Start screen would certainly increase the launch time by a magnitude or two. The time lost this way is certainly not a big deal. However, the main problem is that I would lose focus if I need several seconds to scroll through the Start menu or start typing to locate an app. This costs mental energy and can slow me down significantly when I am already tired at the end of the day.

In my post Start menu vs. Start screen – Why Microsoft must dump the desktop, I outlined why I believe that most people dislike the Start screen, not because of its functionality downsides but because they feel uncomfortable using two different UIs side by side. Thus, the main issue with the Start screen and the Modern interface is about design and not about functionality. However, I see a lot of possible ways to improve the Start screen to make it an even better application launch tool. The list below contains my top 10 wishes for the Start screen.

Blinking live tiles make Windows 8 appear more like a consumer toy than a professional OS that helps me get my work done. I think blinking live tiles is a major reason why many organizations decided against Windows 8. Live tiles can be very useful if they provide important information. Unfortunately, most apps use this feature only to attract attention. Users and admins should be able to not only turn off a single live tile (as is possible now) but system wide. A Group Policy exists (Turn off tile notifications). However, this policy only prevents tiles from downloading updated information; it doesn’t stop the tiles from blinking. In addition, admins should be able to decide which tiles are allowed to update. This feature would be particularly important if the Start screen replaces the desktop. A Start screen that blinks like a Christmas tree is highly distracting. 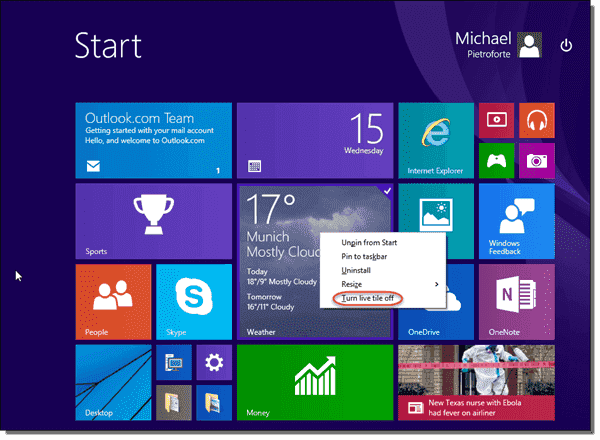 Live tiles can now only be updated by replacing the entire tile contents. For instance, I am using a currency converter app that constantly updates its tile with the latest exchange rate. Every second or so, an entirely new tile fades in. If you have a couple of live tiles on your Start screen, this can be very distracting. Instead of fading in, live tiles should update unobtrusively by only replacing the part of the tile that contains the information. In the case of my currency converter, it would be enough if just the exchange rate is updated.

I think the Start screen offers enough space for the apps that the vast majority of users need for their work. However, power users sometimes complain that they have to scroll to access all their apps. I guess many don’t know that tiles can be resized. The problem is that you first have to select the tiles you want to resize. This is quite cumbersome if you prefer small tiles for the entire Start screen. Hence, we need a switch that allows us to resize all tiles with just one click.

Currently, Windows 8 and Windows 10 only support four tile sizes: small, medium, wide, and large. I would love to have much larger tiles. One of the reasons why some live tiles constantly change is because not enough space is available to display all relevant information. Many users now have very large displays, and power users often work with multiple screens. Imagine an instant messaging app that displays buddies who are online or an email app that shows all the senders and subjects of all new emails. 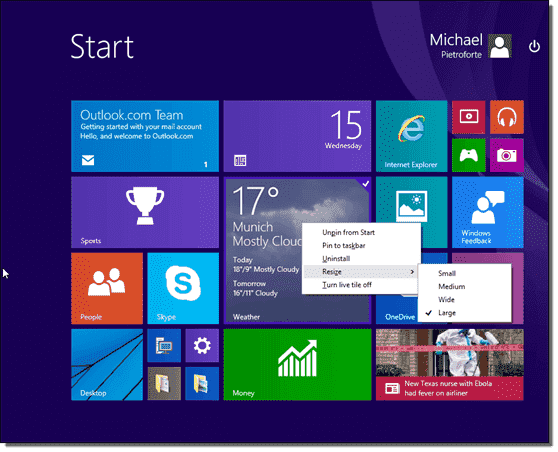 Larger tiles would make it possible to integrate control into tiles that allow you to interact with the app without launching it. For instance, if you want to text one of your buddies from your instant messaging app, you could just double-click her avatar on the live tile. Or, if you want to open an email from your mail live tile, you can do so without launching the mail app. In a way, this would blur the distinction between the app’s user interface and its tile. With live tiles, Microsoft already took the first step in this direction. Tile controls would be the second. The point about this feature is that you would no longer have to launch all those background-running apps in the morning to alert you if new information is available. All self-updating apps would be already live and nicely arranged right after you sign in.

To use the Start screen efficiently, you have to arrange its tiles. The apps you need most often should be placed at the beginning of the Start screen. A Start screen that forces you to scroll to reach a tile is as awkward to handle as a Start menu. However, placing a tile at the right position can be quite cumbersome because Windows moves adjacent tiles automatically to new positions, and most often at places where you don’t want them. You can only launch an app at maximum speed if its tile always stays at the same position. If you have to search for a tile, even if it is at the beginning of the Start screen, you will be almost as slow as with the Start menu. It is therefore essential that we can move a tile to a specific position without changing the place of other tiles. Of course, this means that you first have to move other tiles to an open spot. Nevertheless, some users prefer the way the Start screen currently works. Thus, a switch that allows us to decide which method is used to arrange tiles on the Start screen would be helpful.

I think most users only work with a couple of apps, and with the large screens and high resolutions we now have, organizing tiles in folders is probably seldom required. However, the human mind is equipped with a strong drive to put everything in order. Yes, some specimens lack this drive; however, for those who can’t resist the urge to tidy up their Start screen, folders would be a helpful instrument. I can imagine putting links to important files in one folder and bookmarks to websites in another.

Restrict as you type 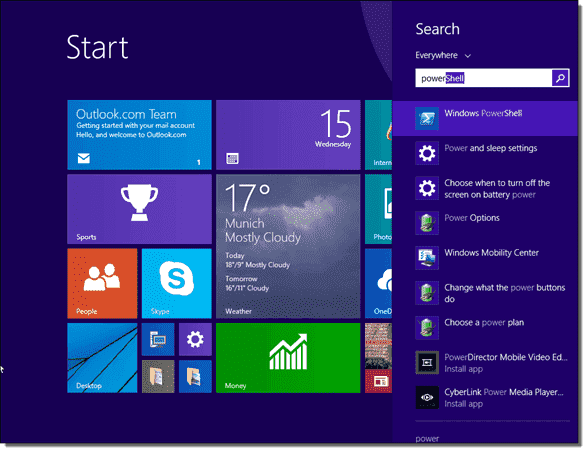 Search on the Start screen

Of course, it is highly unlikely that Microsoft will introduce any of my wishes in the final release of Windows 10. However, since Windows 10 might be the last major Windows release, I have hope that some of these changes will come with later updates. To be honest, I am quite disappointed that the Start screen in Windows 10 looks pretty much like in Windows 8. If Redmond is serious about this new user interface, they should aggressively extend the Start screen with new features.

What do you think about my suggestions? Do you have ideas of your own for how the Start screen could be improved?