VMware has always had great tools for migrating and converting VMs. When you needed to migrate a physical computer to an ESXi host, vCenter Converter was easy and convenient. Another migration option was vMotion, which allows live migration of workflows between hosts and between datacenters.

As you can imagine, there is no magic. Something must transform the other hypervisor's VMs to a VMware-compatible format. This is VMware HCX, which does the work behind the scenes.

What is VMware HCX? ^

HCX is an abstraction layer between the on-premises datacenter and the cloud datacenter, also called the software-defined datacenter (SDDC). It is a workload mobility platform using WAN optimization, encryption, load balancing, and a VPN. It can also transform the workload from one format to another using in-guest agent software called Sentinel.

HCX allows various methods of migrating VMs from on premises to the SDDC with or without downtime. Another advantage is the possibility to vMotion several VMs at the same time and schedule this move for after work hours, which is not normally possible with traditional vMotion.

What are the use cases for VMware HCX? ^

The principal use cases are workload migrations, but there are other interesting use cases. For example, you can use HCX if you need distributed applications with workload portability between on-premises sites and the cloud.

Some customers need a boost between on premises and the cloud. HCX can fit into this scenario by quickly migrating many VMs to the cloud for an additional boost.

Disaster recovery as a service (DRaaS) is another example when your cloud datacenter has up-to-date copies of your production VMs ready to start up. We can also talk about disaster avoidance, which allows migrating workloads and avoiding downtime during hurricanes. 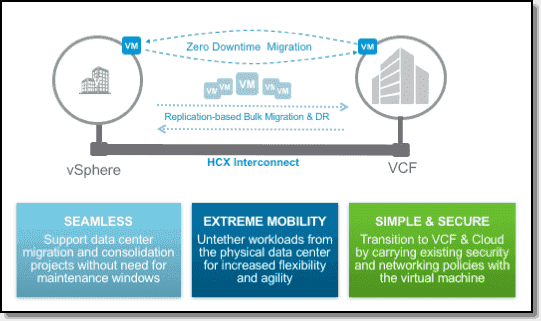 Where can I migrate my VMs? ^

VMware HCX Advanced is bundled into VMware cloud on Amazon Web Services (AWS), the NSX Data Center Enterprise Plus package, and the Hybrid Cloud Foundation bundle. It is also available via cloud partners like Azure, IBM, and CenturyLink.

VMware HCX Enterprise has additional functionality and is available as an add-on license. This edition has live bulk migration and migration of KVM and Hyper-V workloads to the current vSphere versions.

Architecture and composition of VMware HCX ^

HCX Interconnect allows setting up replication and vMotion over the WAN and internet to the target site. It also provides encryption and traffic optimization.

HCX Network Extension creates a network overlay with secure layer-2 capabilities (VLAN, VXLAN, and Geneve) for vSphere. This allows the migrated VMs to keep the same IP and MAC addresses.

HCX Sentinel Gateway allows transforming non-vSphere workloads, which can be KVM or Hyper-V ones. You must install software on the source VMs and the Sentinel Data Receiver VM installed at the destination.

HCX Sentinel Data Receiver receives the workloads from the Sentinel Gateway and monitors data replication at the destination.

VMware HCX is not a new product but rather a rebranded and enhanced Hybrid Cloud Manager from the vCloud Air offering. The product has some good history and has improved over time. Now under the name VMware HCX, this suite enables enterprise mobility and flexibility with some interesting use cases. You can easily move and migrate workflows running at different on-premises datacenters via this platform. Customers running very old VMware editions can use HCX as a transformation platform for migrating to modern datacenters.

HCX can also handle very large VMs with replication-assisted vMotion. This works hand in hand with vSphere replication, which copies most of the data to the cloud. After this, HCX can plan a cutover to the new VM created at the cloud (target) site. With this solution, your large production VMs are accessible even during the migration process.

HCX is one of the most interesting technologies VMware has introduced recently that can solve many migration, disaster recovery, or disaster avoidance scenarios.