Brandon Lee  Mon, Oct 11 2021Fri, Nov 5 2021  deployment, windows server  6
Businesses may be looking to migrate print services from legacy to current versions of Windows Server (2019 or 2022). With the Print Migration Wizard, you can export the core components of the Print and Document Services role, such as print queues, printer settings, and printer ports, and reimport them to the new server.

You might have used the Printer Migration tool (PRINTMIG.EXE) in the past to migrate print services to a new server. However, this tool has been replaced by the Printer Migration Wizard, which uses the printbrmui.exe and printbrm.exe command line tools. In addition, it is the only tool produced by Microsoft that is supported for 64-bit operating systems and drivers.

IT admins can also use the printbrm.exe command line tool and the task scheduler to regularly export or import printers as part of their backup and disaster recovery processes. This functionality provides a great way to perform backups of your print server configuration settings, which can quickly be restored later. 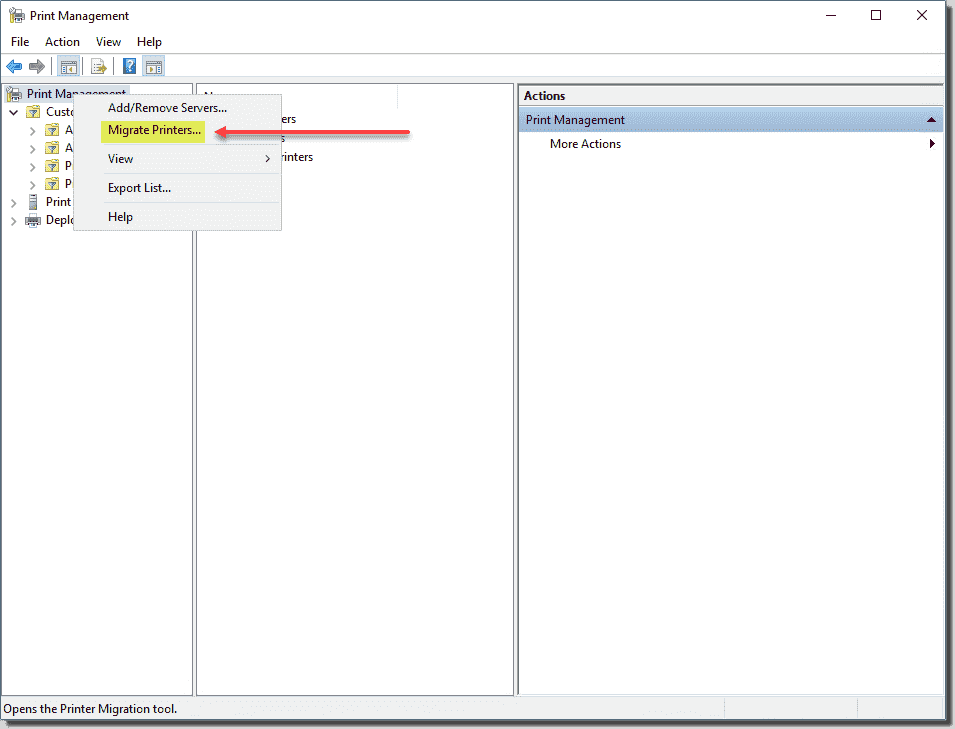 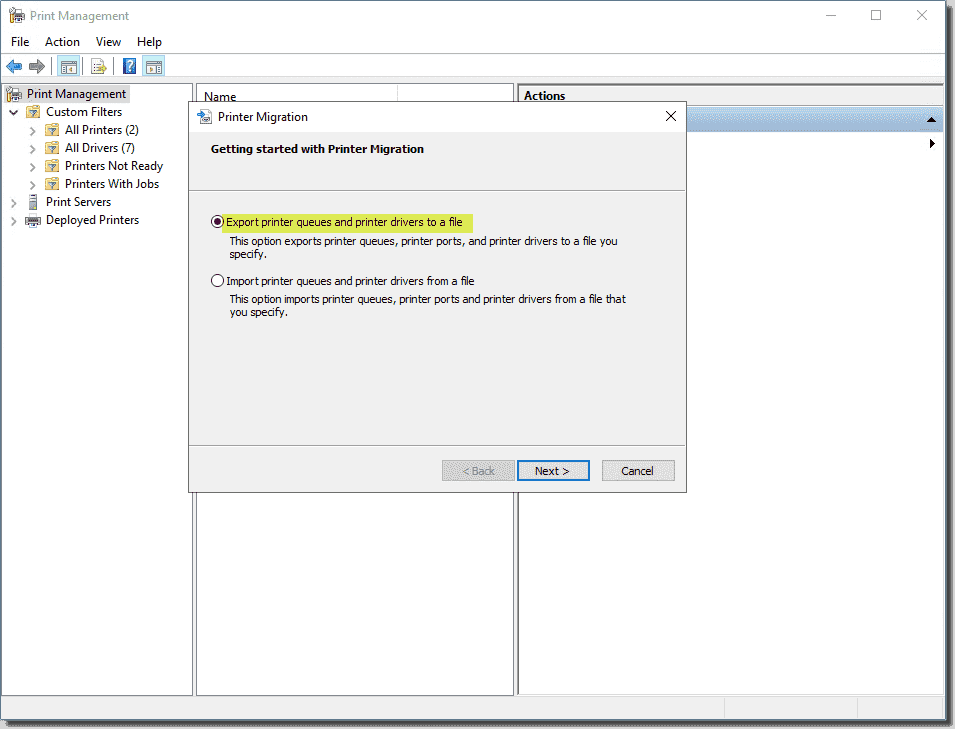 Export printer queues and printer drivers to a file

Choose the server from which to export the printer settings. Here, you can type in the NetBIOS or FQDN of the source legacy Windows print server. 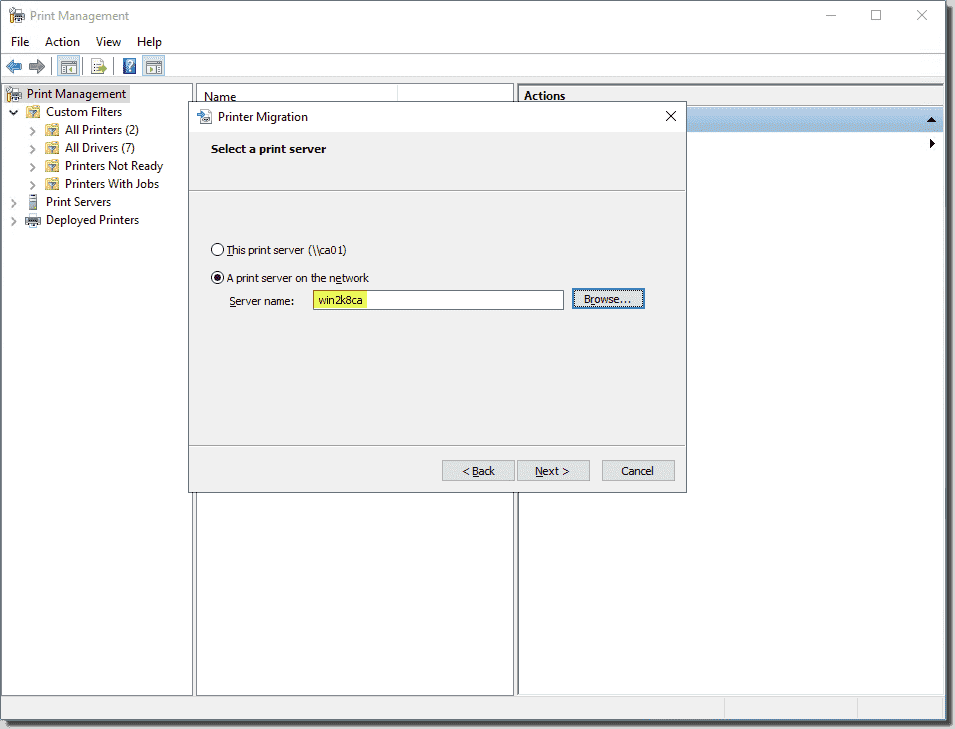 Choose the source of the printer settings export

Next, review the list of items to be exported. After that, select the location of the printer export file. 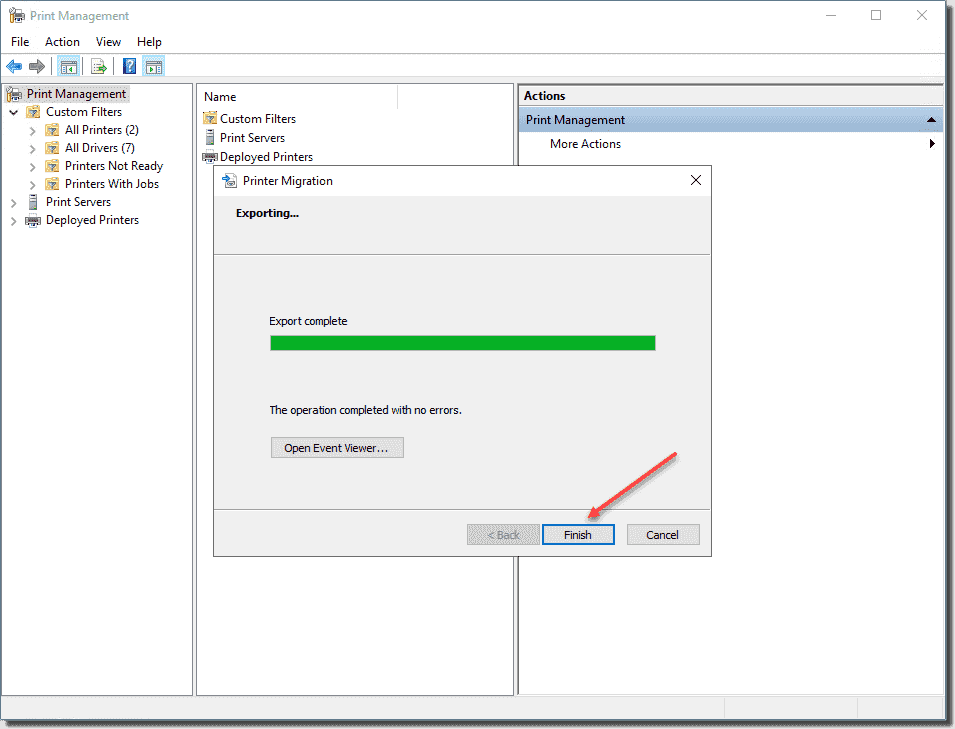 Importing printers to the destination server ^

Now that we have the export of the printer configuration settings, we can begin the import process. First, as you see, we only have a couple of default printers on the new print server. 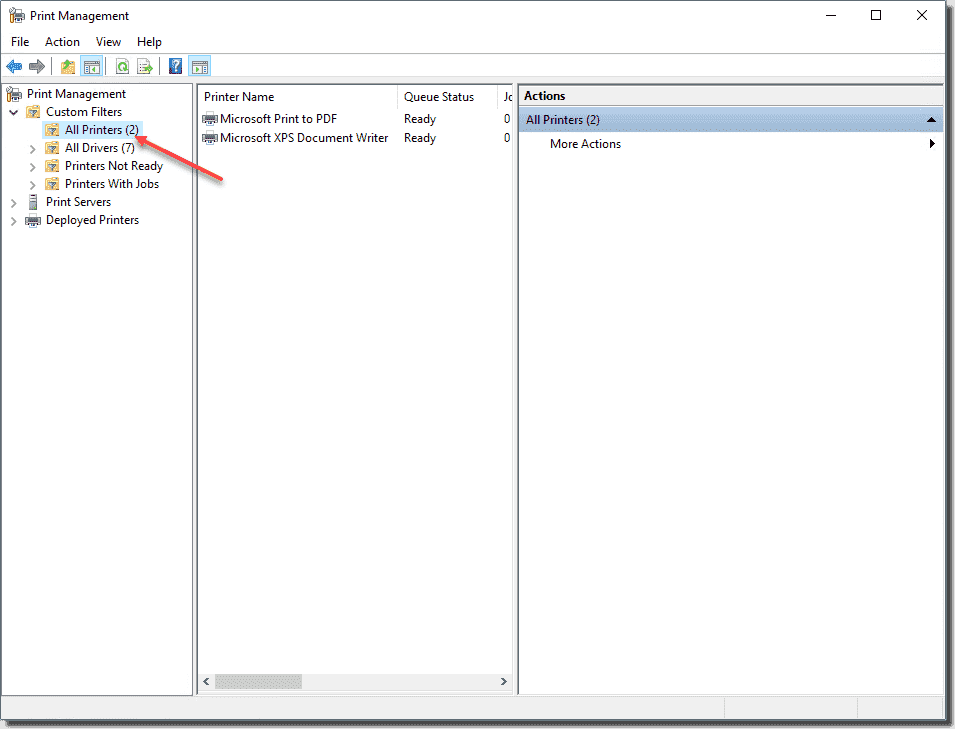 To import, we follow the same procedure to start the Printer Migration Wizard by right-clicking the Print Management node and selecting Printer migration. This time, we choose Import printer queues and printer drivers from a file. 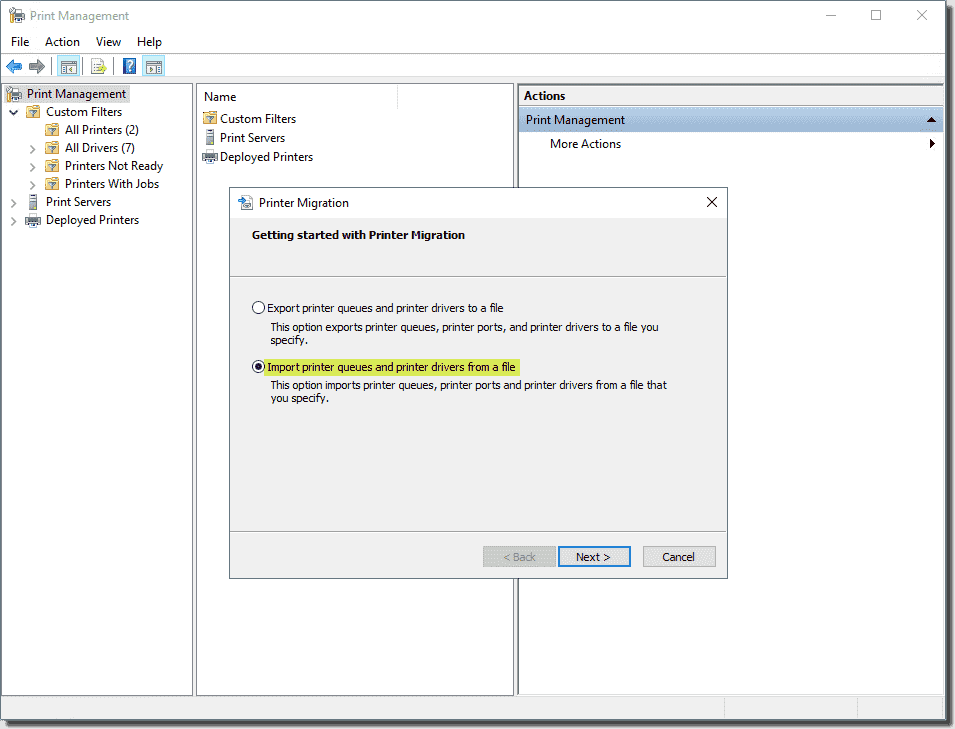 Import printer queues and printer drivers from a file

Now we can select the printer export file created earlier to begin the import to the destination print server. 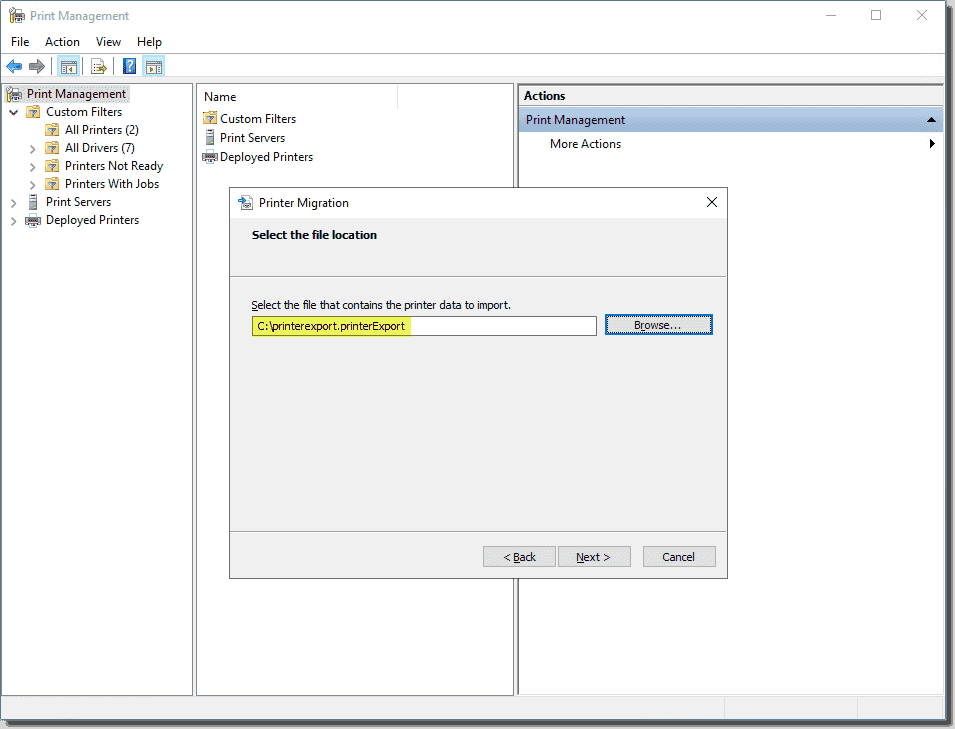 Next, select a destination print server for importing the exported printer settings file. We are choosing the Windows Server 2019 target server below, which is the same server we are running the Printer Migration Wizard from. 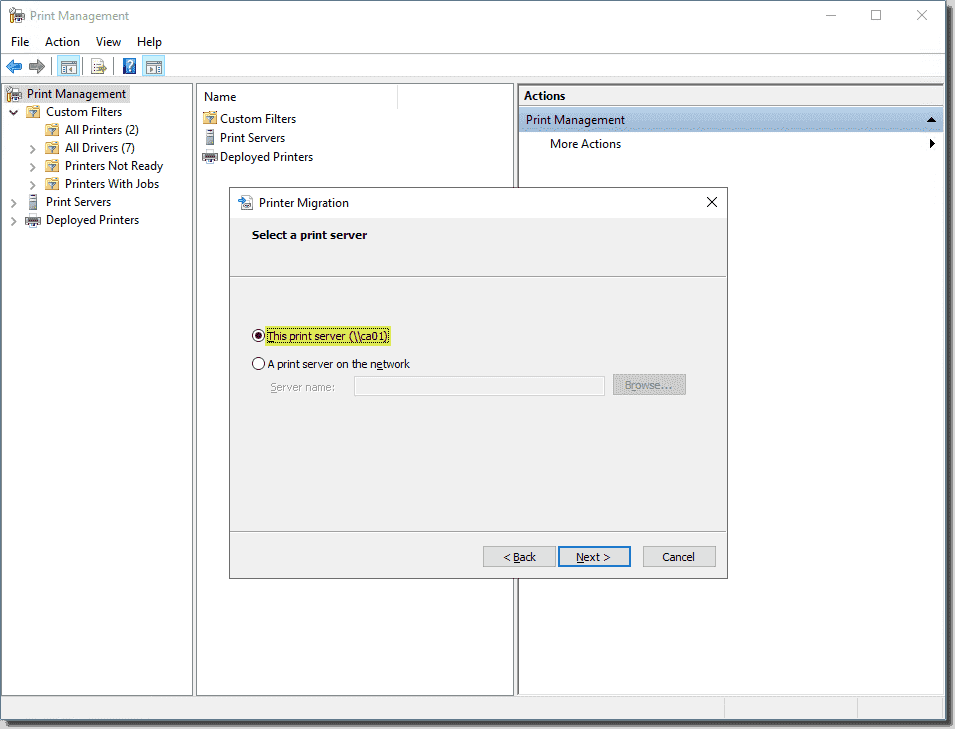 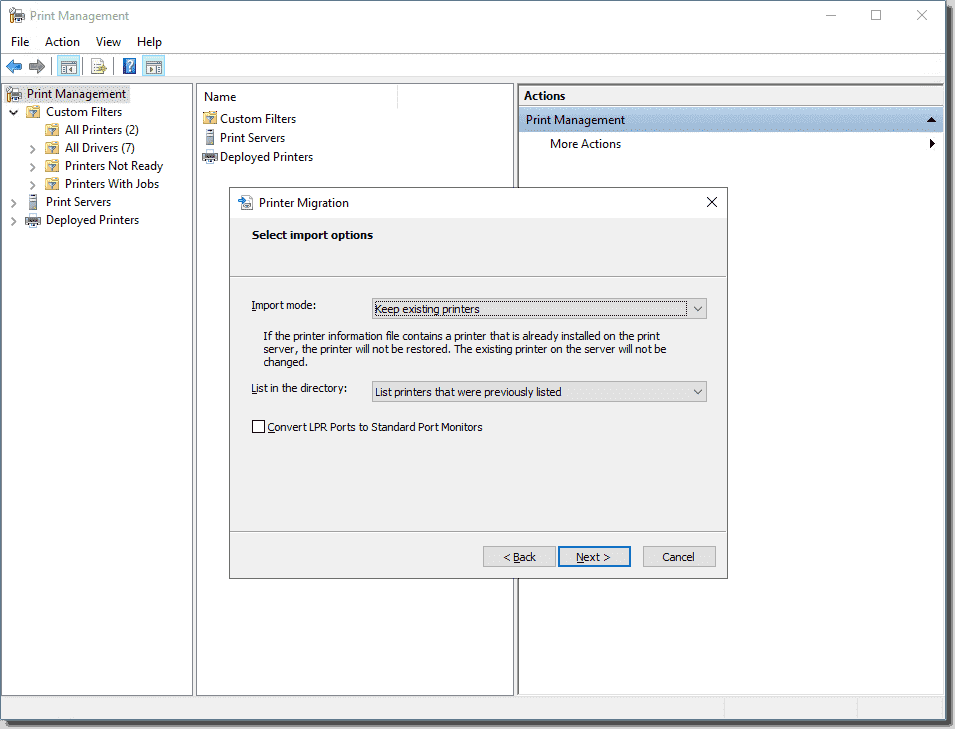 The import process begins and should complete successfully. We now have the HP LaserJet 4100 Series printer listed in the installed printers, ready for connections. 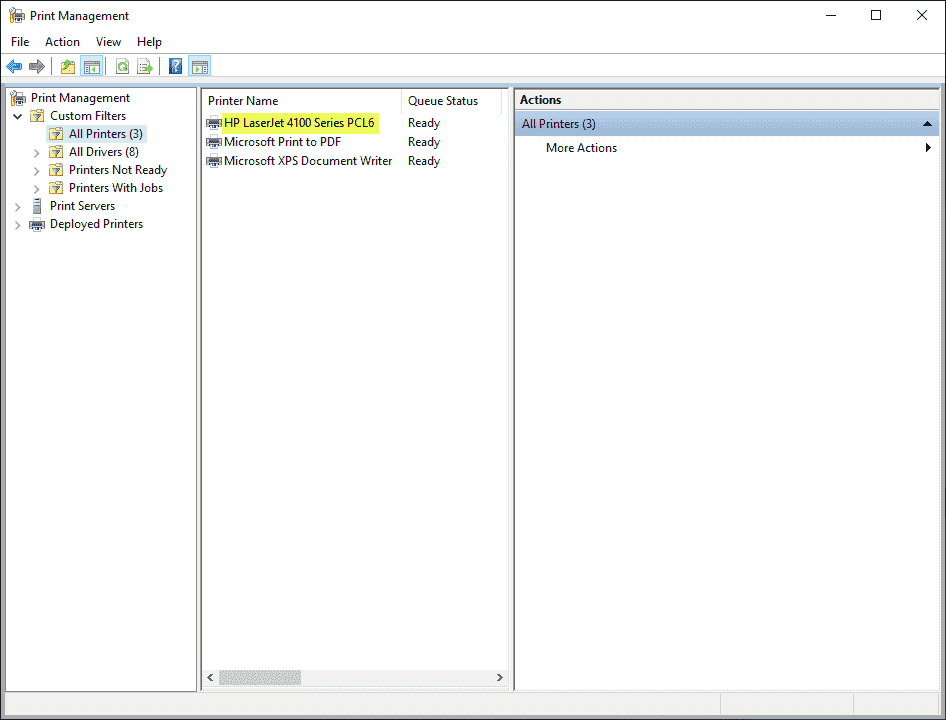 Viewing the migrated printers on the destination Windows Print Server

The Printer Migration Wizard and the printbrm.exe command line tool are built into the Print and Document Services role and can export and import print queues, printer settings, printer ports, and other settings. In addition, they enable quickly and painlessly migrating all the installed printers from a legacy Windows Print Server to a new Windows Print Server running on Windows Server 2019 or Windows Server 2022.

Finally, the command line tool and the task scheduler provide an effective way to back up print configuration settings as part of your disaster recovery plan.