Paul Schnackenburg  Thu, Sep 17 2020Wed, Sep 30 2020  cloud computing, security  2
To say that Microsoft's security services naming is puzzling is an understatement. This article will alleviate the confusion and cover each of the different products and services, which area they provide value for, and how they fit together under the larger Microsoft Threat Protection umbrella.

Microsoft Threat Protection was first announced at Ignite 2018, both as a portal and a connection point for all the other security products in the portfolio.
At the Ignite 2020 conference, most of these services were renamed. In this article we'll show the new names along with mentions of updated and new features.
Microsoft Threat Protection is now Microsoft 365 Defender and encompasses the following services:

The service previously known as Azure Security Center has been renamed to Azure Defender (at least the new names are consistent):

The products that haven't changed their name but are still part of Microsoft's overall security stack are:

Behind these security services is Microsoft's Intelligent Security Graph, a daily collection of 6.5 trillion signals that is analyzed by machine learning to identify risky IP addresses, risky domains, and so forth. All this data feeds into the backends of these services.

Microsoft Defender for Identity (a much more descriptive name, the old name was confusing as it has very little to do with Azure) is a cloud solution that's somewhat unique in this line-up, as it's mostly focused on your on-premises Active Directory (AD). 4sysops looked at it here. When an attacker gains a foothold in your corporate network, they'll perform different actions such as lateral movement (compromising more machines) to eventually be able to elevate privileges to server or domain administrator, leading to domain dominance. These activities leave a trail on your domain controllers (DCs). Microsoft Defender for Identity is specifically designed to identify and catch them.

To get started with Microsoft Defender for Identity, you first create your instance in the cloud, and then you install the sensors on all your DCs. In very high security environments, you can use a standalone sensor on a member server with event forwarding. The sensor monitors the event log and captures the relevant network packets. Microsoft Defender for Identity uses machine learning to build an understanding of what's normal behavior for both user accounts and devices/network endpoints in your networks. 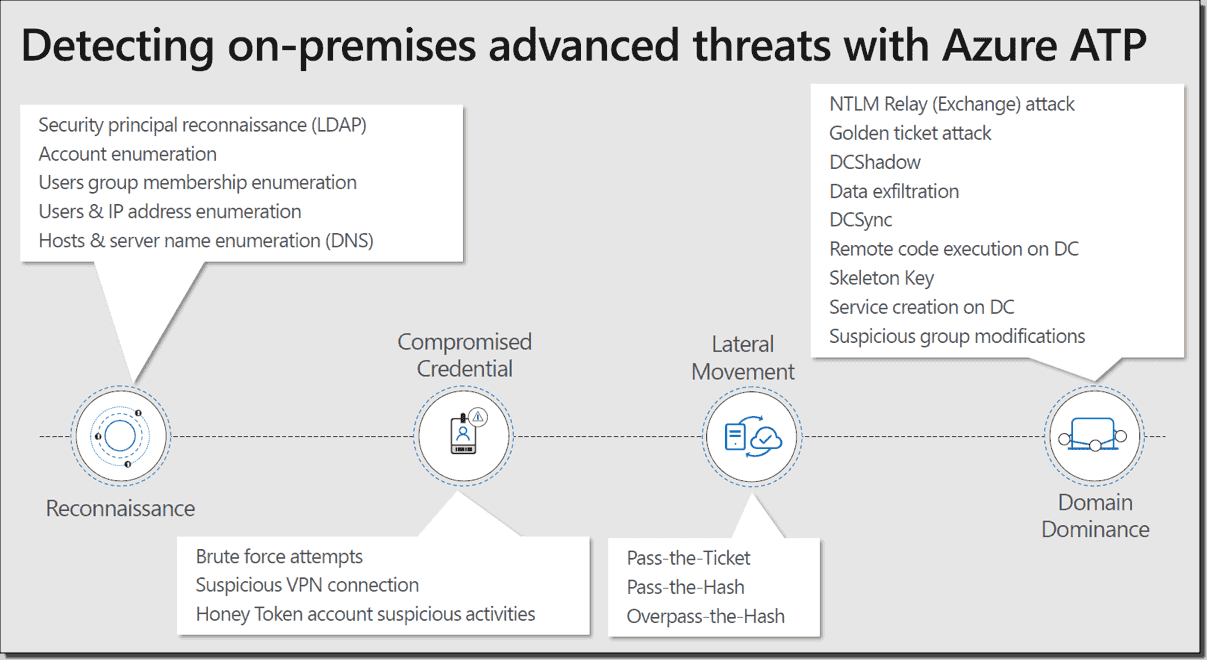 Microsoft Defender for Identity and the Kill Chain (Courtesy of Microsoft)

Microsoft Defender for Identity requires its own add-on license; it's also part of Enterprise Mobility + Security (EMS E5), which in itself is part of Microsoft 365 E5.

Microsoft Defender for Office 365 builds on top of Exchange Online Protection (EOP) that all users of Exchange in the cloud are protected by. EOP provides connection, spam, and malware filtering settings for incoming email, outbound spam settings, and quarantine of questionable emails and Domain Keys Identified Mail (DKIM) settings.

If these policies don't catch enough bad stuff, you can enable Microsoft Defender for Office 365 policies. These include Safe Attachments, which will open unknown email attachments in a VM and identify whether they're malicious. Safe Links does the same for URLs in emails (at the time of click) and both are available across SharePoint, OneDrive, Microsoft Teams, and Exchange Online. Microsoft Defender for Office 365 Protection Plan 2 adds features such as Threat Trackers, Threat Explorer, automated investigation and response, and Attack Simulator for testing your defenses.

Microsoft Defender for Endpoint uses machine learning models, some running locally and some in the cloud to protect each endpoint against threats. It's also a full EDR solution, so it inventories all software that's installed on each device and all processes that are running. At Ignite 2020 Microsoft furthered the vision of Microsoft 365 Defender by labelling the whole stack together as Extended Detection and Response (XDR), as each component works together with the others, it's not just about protecting endpoints but holistically respond to attacks across servers, applications, and your hybrid infrastructure. 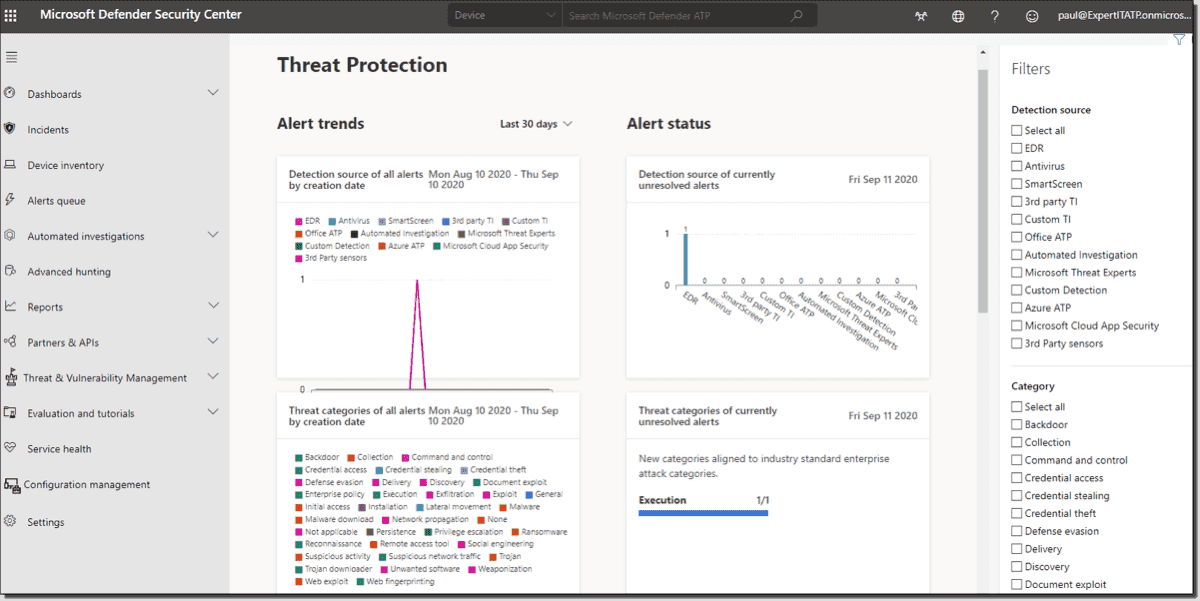 Old timers reading this might remember a free tool called EMET, some of its attack surface reduction tech is in Microsoft Defender for Endpoint , along with Threat and Vulnerability Management which identifies vulnerable versions of installed software and prioritizes what needs to be patched first, and hands this over as a job to the desktop team. Automated investigation and response provide automated remediation of threats with an undo button. Finally, Microsoft Defender for Endpoint also gives you access to Microsoft Threat Experts, SOC analysts at Microsoft, providing a managed threat hunting service to complement your own security analysts.

New features revealed at Ignite include the move to System extensions from Kernel extensions for the new MacOS, the iOS agent and Defender Application Guard for Office, providing an isolated VM security boundary for untrusted Word, Excel and PowerPoint documents in a similar way to how Edge can handle untrusted web sites today.

Azure Defender for SQL now extends to your servers on-premises and in other clouds and the recent acquisition of CyberX is integrated to provide protection for existing Operational Technology deployments.

Azure identity protection is part of Azure Active Directory (AAD) and uses machine learning to build up a profile of your users' sign-in behaviors. It combines these with signals from the Intelligent Security Graph to identify risks associated with each user credential.

You then build user and sign-in risk policies that can take certain actions. For example, Jane normally logs in from Australia on her corporate laptop. If her username and password are used to log in from an unknown device in India, the policy will kick in and prompt MFA (or block the login).

Microsoft Cloud App Security is a cloud access security broker, which basically means it's a firewall in the cloud, securing SaaS application access for your users. Microsoft Cloud App Security lets you discover services that your users are using (Shadow IT), unsanction ones that don't meet your corporate standards, and sanction those that do. It also lets you apply policies for documents that are uploaded to cloud storage (OneDrive, DropBox, Box, etc.), do real-time DLP in sessions, and mitigate threats.

It's also a way to simplify licensing. The most common question Microsoft received around Intune/SCCM was if I have licensing for one, can I use the other one? Well, now you can. It's a hybrid solution where all your on-premises resources are managed by SCCM but controlled from the cloud console, and your mobile assets are managed from the same console through Intune.

Together, they provide numerous security features, including the ability to distribute apps to any platform, as well as control corporate data and prohibit it from being leaked into non-business apps. 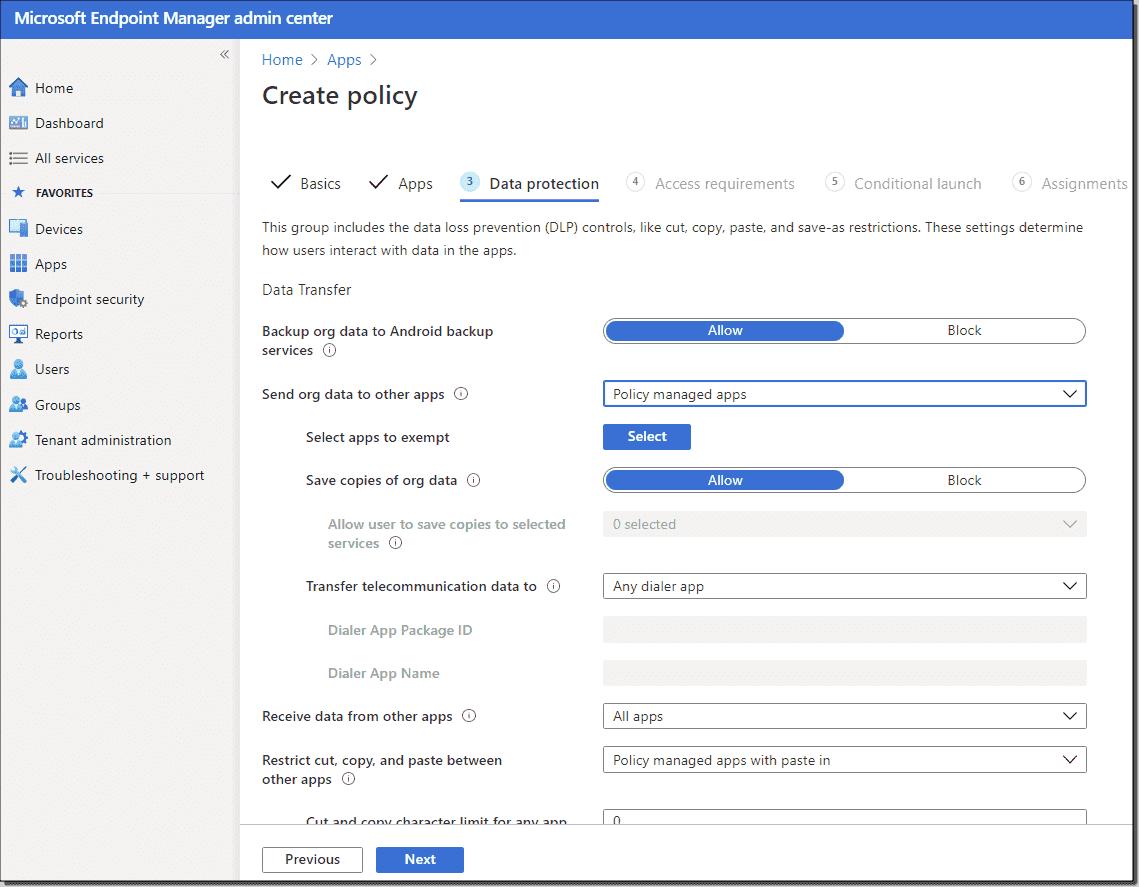 The enterprise version of Windows 10 unlocks a number of security features, such as Credential Guard for Remote Desktop, Windows Hello for Business, BitLocker, and Windows Information Protection to separate corporate and personal data.

This cloud-based SIEM is quickly growing in popularity and integrates with several of the other services easily. A SIEM is a centralized database of event logs from all your devices, servers, networking infrastructure, etc. This is then analyzed for evidence of intrusion, raising alerts as required. Analysts use automated and manual search tools to hunt through the data to identify signals from attackers. Importantly, if you're an SMB that is using O365/M365, know that ingesting the unified audit log from there as well as alerts from the ATP services is totally free—a good reason to learn a bit about Sentinel and set up a POC.

At Ignite 2020 Sentinel added User and Entity Behavior Analytics (UEBA), building up a database of what’s normal activity for user accounts and devices and raising the alarm when anomalous behavior occurs. The new Watchlists lets you import CSV files of non-security data such as critical assets, terminated employees etc. and use these data in queries.

If you’re particularly adventurous you can even build your own Machine Learning models in Sentinel.

As you can see, Microsoft / Azure Defender is quite a lineup of different security services for defending against various attacks. I think the real strength, however, is twofold: first, the underlying unified Intelligent Security Graph that identifies bad actors and provides Threat Intelligence (TI) to all these services, and second, their integration. Often, it takes just a single click or a few steps to get them to "talk to" each other. For instance, if you're using Microsoft Cloud App Security to control access to SaaS services and have Microsoft Defender for Endpoint on devices, you can enforce the same controls no matter which network the endpoint connects through, including their home Wi-Fi.

In today's business landscape, where security is more important than ever (especially as many of us are working from home in hastily cobbled together solutions), having an integrated security solution can simplify management, increase visibility and protection, and above all, reduce alert fatigue for your SOC analysts.