There’s no in-place upgrade option for going from SCCM 2007 to v.Next. Fortunately Microsoft has built migration tools right into the console to help with the transition.

In a nutshell the process follows these steps: first your SCCM 2007 environment is evaluated, it has to be at the SP2 level, and then you install your new v.Next hierarchy. At the central site metadata is mapped from the old to the new so that each site is matched to its new counterpart (you’ll have to come up with new site codes, you can’t use the same ones you do today), this synching continues until you turn it off at the end of the migration so as to capture any changes in the SCCM 2007 environment.

All objects are then transitioned over using migration jobs that you can run straightaway, schedule for later or run manually when it suits you.

During the co-existence phase DPs are shared between both environments. Upgrading clients is an administrator initiated process; you can use any software deployment method of your choice. When your entire infrastructure has been migrated to v.Next you can decommission (which only means the synchronization of data stops) from the bottom of the hierarchy back up to the top. Computers and users can’t be in the same collection in v.Next so you’ll need to fix any such collections that you may have today.

Microsoft has a product called Systems Center Mobile Device Manager 2008 (MDM) which puts smartphones into AD and lets sys admins manage them much like desktops and laptops. A cool technology that is limited to Windows Mobile 6.x so it’s probably safe to say it hasn’t been a best seller for Microsoft.

MDM functionality is being incorporated into v.Next whilst adding management support for Nokia Symbian devices (coming in beta2) including inventory, software deployment and settings management. Microsoft promises more platforms will follow; obvious targets are Windows Phone 7, iPhone and Android. There will be limited management of these platforms at RTM via a connector for Exchange Active Sync. What won’t be there at RTM unfortunately is remote control for mobile devices.

Exchange 2010 pioneered a new way of doing administrative security for large applications that are managed by many people. v.Next adopts this approach and it’s fully integrated into the new console. For instance, if you have a software deployment administrator they will only be able to see that part of the console, anything else that they don’t have rights to manipulate won’t be visible. 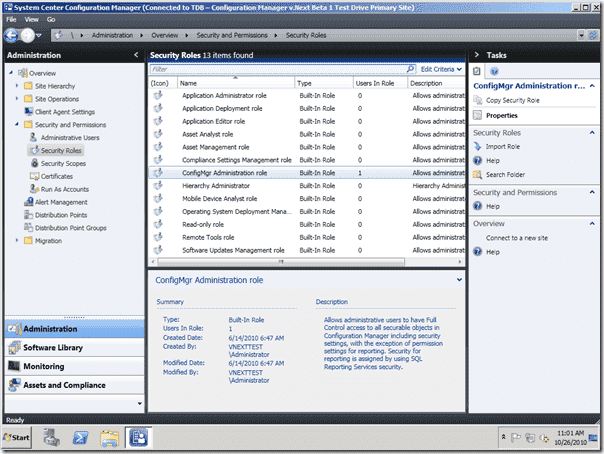 This is an early beta with several bits missing or announced as changing in the next beta. It’s clear however that this is a big refurbishment of config manager with many innovations sure to please businesses and sys admins alike. The thing that’s missing is PowerShell, is it possible that a new server application from Microsoft is NOT built on PowerShell? There’s no sign of it in beta1 at least.

User Centric Management should appeal to users and administrators alike whilst the new console and RBAC are obvious crowd pleasers. Broader mobile device management and a much more flexible application deployment model are sure to win over new businesses whilst existing SCCM sites will enjoy the simplified hierarchies.