Many systems administrators are familiar with Microsoft’s Systems Center Suite, relying on its various components for their day to day jobs. Operations Manager keeps tabs on the health of your infrastructure, Data Protection Manager makes sure all your (Microsoft) workloads are safely backed up, Virtual Machine Manager keeps your virtual servers and hosts in check and Configuration Manager keeps track of computer hardware and installed software.

Systems Center Configuration Manager (SCCM) 2007 was recently updated with an R3 release which added power management and a few other tweaks. In this article I’ll give an overview of the next major release of SCCM, currently called “v.Next” and explain where Microsoft is taking SCCM. This article is written on beta1; beta2 is expected in January 2011 with RTM possibly sometime mid next year.

There are major changes to the product with User Centric Management (UCM), a new management console, simpler infrastructure and administration along with a new role based security model.

The enterprise IT landscape is changing for systems administrators. As if cloud computing wasn’t enough of an upheaval the consumerization of IT has well and truly taken hold. Gone are the days when all you needed to keep track of was servers, desktop computers and the occasional laptop. Today staff (especially younger employees, the "digital natives") expect to be able to bring their own laptops, tablets and smartphones to work and access company data and applications. And mobility is truly ubiquitous with everyone expecting to be able to work whenever and wherever they choose.

v.Next adapts to this new world with User Centric Management (UCM); linking people to their Primary Devices and having one or more Primary User for each device. Assigning this user device affinity can be done manually by administrators, users themselves (if allowed), through an imported file or through SCCM collecting usage statistics.

Administrators can build rules around delivering applications to end users based on UCM; for instance if this is the users primary device, install the application as a native Windows installer but if it’s not their primary device only install an App-V version or connect to a Remote Desktop App instead. 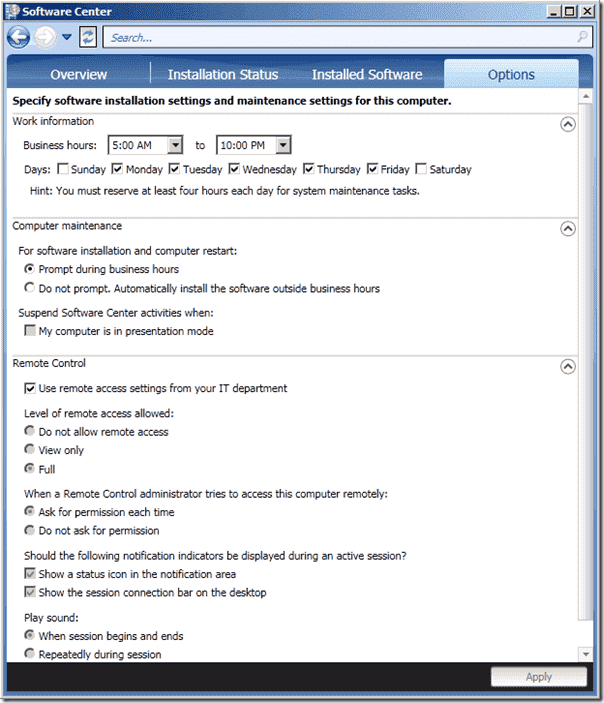 Applications Here, There and Everywhere ^

SCCM v.Next has a new model of distributing software; Applications takes the place of Packages (although packages are still around, for migration compatibility and “one off” scripts). An Application can be Available in which case the user has to install it (or request if it requires approval) through the new Silverlight based self-service web site called the Software Catalog. Alternatively an Application can be Required in which case SCCM will install it on the users device(s). Note that this new model is state based so if a user uninstalls a required application it will automatically be reinstalled. Each application can have one or more deployment types. In beta1 this includes Windows Installer, Script Installed, Microsoft App-V or Windows Mobile Cabinet. Most demonstrations also mention Remote Desktop App as a deployment type. 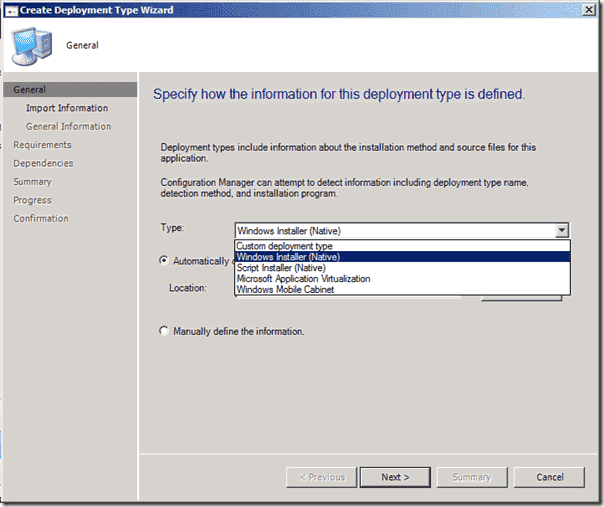 The last piece of the puzzle are Requirement Rules, these are designed to eliminate the need for complex query scripting by allowing administrators to set business or technical restraints on software deployment. These are evaluated at the time of installation; a common problem in SCCM 2007 was relying on SQL queries which might be almost a week out of date when the installation actually took place. 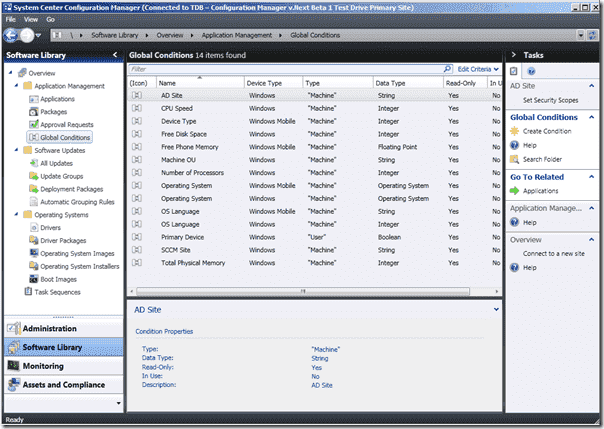 Applications can also have Dependencies where one application depends on another application being installed first. All software deployment is now tracked in the Monitoring node, in SCCM 2007 you had to rely on reports for tracking software installs.

In the next part of this article we’ll look at the Administrators experience and Migration.