Paul Schnackenburg  Mon, Jun 13 2011Wed, Jun 22 2011  system center, troubleshooting  0
In part 1 of this two part review we look at what System Center Advisor is and how it works as well as how to deploy it.

Imagine that you’re a systems administrator troubleshooting an SQL or AD server that’s misbehaving. Now envision a gadget that could send you all the accumulated knowledge and skill contained in a senior Microsoft field engineer to sit right next to you and help you. That gadget is not System Center Advisor, at least not yet, but the vision is there.

System Center Advisor (SCA), formerly known under the codename Atlanta is a new cloud service from Microsoft that assesses server configuration and helps you proactively avoid problems. It gives you access to current and historical configuration data as well as reducing downtime by proposing improvements and notifying you of updates. 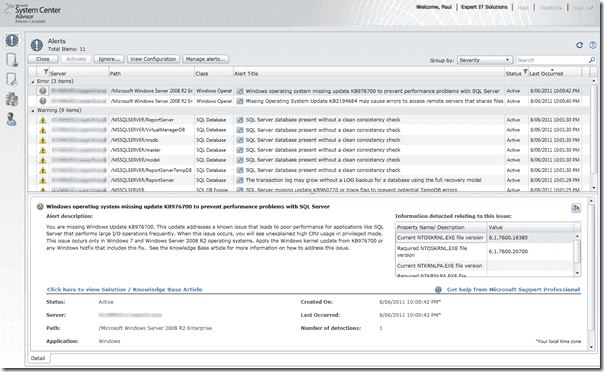 As mentioned there’s no server infrastructure on site, only an agent to install on every server that you’d like to oversee with SCA. One (or more depending on the size of your environment) server is designated as the gateway through which the data from the other servers flow to the cloud.

You then login to www.systemcenteradvisor.com to access your company portal. The current release candidate is free and open to all but when the final product is released it will only be offered as part of Software Assurance (SA). This means that each product you want to monitor on each server, (Windows Server, SQL Server and in the future Exchange and SharePoint) needs to be covered by SA.

The products monitored currently are SQL Server 2008 and 2008 R2 as well as some Windows Server 2008 / 2008 R2 features, notably Active Directory (AD). This will be extended to cover additional products in the future. SCA is NOT a replacement for your current monitoring systems such as System Center Operations Manager – it doesn’t provide real time monitoring, instead collecting data every 4-8 hours, aggregating this once per day and uploading it once per day. SCA’s role is to proactively help you avoid downtime, not warn you when a server or service is already down. SCA is currently available in English only. 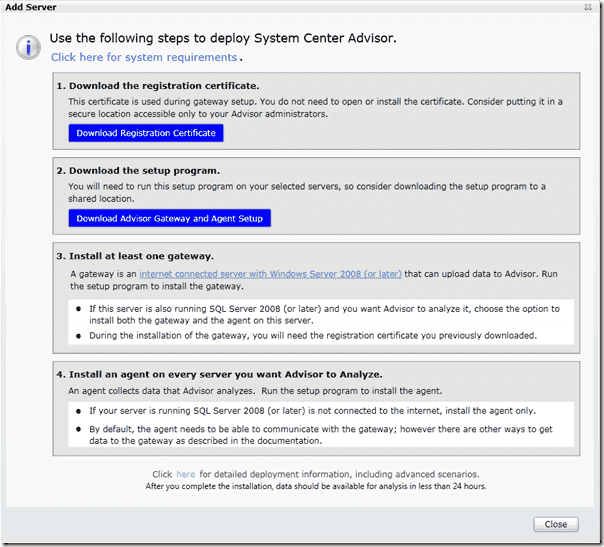 The agent is downloaded (31 MB in size) from the systemcenteradvisor.com website and installs in a minute with no reboot required. Deploying a gateway is just another check box in the wizard. 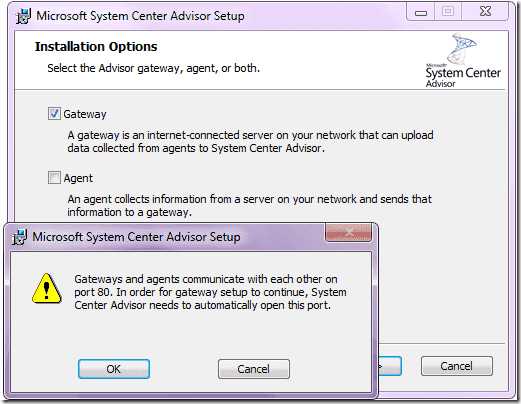 All data communication over the internet is protected by a digital certificate that’s generated when you sign up for SCA, during the installation of the gateway you have to point to this .pfx file. The gateway server needs outbound connectivity on port 80 and 443 while the agents only need network connectivity to the gateway server. Data volume is in the region of 100 KB per day per server. 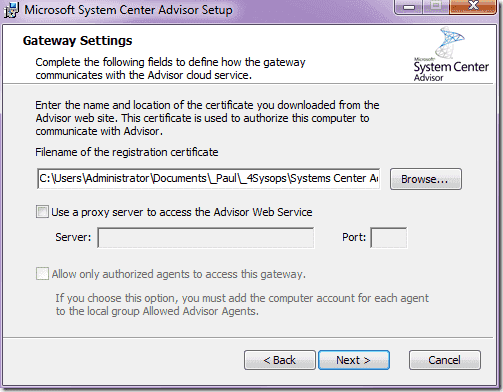 SCA utilises the same agent as Operations Manager 2007 R2 so if you don’t use SCOM in your environment that agent is installed. If you do have the SCOM agent already installed it’ll be put into multi homing mode and one channel will provide the information SCA is looking for while another channel will continue to gather normal SCOM data.

As the gateway syncs data to the cloud it also checks for updates to Management Packs as additional common problems are discovered by Microsoft’s support.

You can change the frequency at which uploads takes place as well as the scheduled time and day through documented registry settings. Likewise the agent can be configured for upload frequency (every 12 or 24 hours or once per week).

In the next post you will read how System Center Advisor helps with troubleshooting and what kind of data is sent to Microsoft's cloud.