Michael Pietroforte  Thu, Jan 9 2014Thu, Jan 9 2014  apple, microsoft  0
An interesting new study of UTA Brand Studio ranks the impact of the Microsoft brand higher than the brands of Apple and Google. I guess all these studies can easily be manipulated. You just have to ask the right questions and you get all the results you want.

The Microsoft brand has the highest impact

However, what I find interesting about this study is that Apple received the second highest aversion score (-18). I think studies that see Apple as the top brand neglect the fact that many people strongly dislike the brand. In my view, the reason is that Apple’s marketing strategy tries to convince people that choosing an Apple product over a competitor’s product says something about you as a person. If you own a superior product, then you must be superior too. Remember the “I am a Mac” campaign?

I believe many people find it repulsive if someone wants to appear superior. I think it also explains why Apple is doing well in countries where competition is highly valued. Some people seem to think that owning an Apple product is helpful if you need to signal to your environment that you are successful. This also explains why Apple’s brand is doing well among wealthy people who are used to spending more money on status symbols. 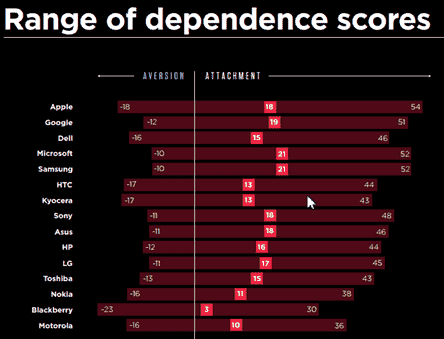 On the other hand, Microsoft has one of the lowest aversion scores (-10) in this study. I think a decade ago we would have seen a different result. Microsoft has become less aggressive and gave up some of its rude business practices. Perhaps this is one of the reasons why Microsoft now faces more competition. Can only highly aggressive companies with uncompromising leaders succeed in our society?

But what happened to Blackberry? According to this study, this brand has the highest aversion score (-23). Honestly, I have no sound explanation for this. Are these former Blackberry customers who are now disappointed that their hero fell from grace? If you have a strong emotional connection with something or somebody, and then notice that all your love was in vain, will your passion turn into aversion?

How are your aversion scores for Apple and Microsoft? Before you post a comment, sit back for a moment and slow down your breathing to four to six breaths per minute. This will put your prefrontal cortex in control (the part of the brain responsible for self-control and social behavior), and you won’t regret an hour later what you wrote. I always do this before I write about Apple. Sometimes it works. 😉