Microsoft HoloLens: Is this the first real post PC device?

Michael Pietroforte  Thu, Jan 22 2015Sat, Jan 24 2015  microsoft, windows 10  4
Microsoft HoloLens, the world’s first holographic computing platform, is certainly the most exciting innovation in IT since the introduction of GUIs. Does the PC finally have a worthy successor?

In the demo, one of the interviewed developers mentioned it. This is the thing that comes after the PC. Compared to the innovations that smartphones and tablets brought us, Microsoft HoloLens really is something totally new. (I mean, cutting off the keyboard from the first mobile devices—which we call laptops—was not really that innovative if you compare it to holographic computing.)

Microsoft HoloLens in every home

For years I have been waiting to see one of the IT behemoths finally leave boring 2D flat screens behind and enter the 3D space. To be honest, I doubted that it would be Microsoft, and I guess that most experts would have bet on Apple or perhaps Google (Amazon somehow tried it with the Fire Phone), but not the company that has been preaching for years the renaissance of the text-based command line interface from the IT Stone Age. Obviously, this new CEO is not an admirer of the past. This is not renaissance; this is the birth of a technology coming right from the future; this is science fiction becoming science fact. It is not yet the Star Trek holodeck, but it is the beginning of it.

Needless to say, the first version of Microsoft HoloLens will have many drawbacks. I don’t remember that Microsoft ever introduced a new product that was immediately a success. We already saw a few limitations in the demo. The holo objects look rather artificial and it appears there is no way to grab and drag objects. I am sure that, once more independent testers get their hands on HoloLens, we will hear of many problems. (Although the first reviews I read were interestingly positive.) Anyway, after the first failure, Redmond starts tweaking and refining until they finally get it right.

Of course, Virtual and Augmented Reality is nothing new, and such products have already been available for some time. But that’s not the point here. When it comes to innovation, nobody will really ask who was first, but only who made the new thing big. It is something totally different if a big one enters a new field.

First of all, this means the technology probably is now ready for the mass market. A big company risks a lot if it embraces a new technology too early. Secondly, and this is even more important, a company the size of Microsoft can build an ecosystem around this new technology. This is the reason why it is fair to say that Microsoft just introduced the first holographic computing platform.

Perhaps one day Holo Studio (which was introduced in the announcement) will replace Visual Studio. Most likely, this is the beginning of the end of the computer screen, including those that can be touched. In a way, this is like cutting off the keyboard, the mouse, and the screen from the PC. What’s left of the PC? Not much. Just the computing unit. We are now really entering the post-PC era. 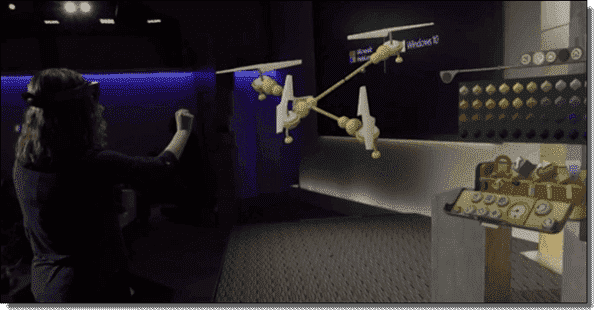 Forgive me my excitement. I can admit it now that in the last few years IT has started to bore me. The only new thing that I really found interesting was the cloud. But now that AR and VR are around the corner, the cloud literally becomes a new dimension. I think with Windows 10 IT is getting interesting again.

Ah yes, Windows 10, the next generation of Windows. I should mention the other shocker that was almost drowned in the excitement about HoloLens. Everyone running Windows 7, Windows 8.1, and Windows Phone 8.1 who upgrades in the first year after launch will get Windows 10 for free. Wow, this will be a hard nut to crack for the naysayers. It is going to get really costly if you don’t upgrade to Windows 10 right away after the RTM. Mr. Nadella, this was a brilliant move!

So what do you think? Has the post-PC era finally arrived? Is Microsoft now back or not?