On June 24th, Microsoft released the preview for MDT 2013. The update is notable for how quickly Microsoft supported (and stop supporting) certain operating systems! So what operating systems are now supported? Windows 8.1 and Windows Server 2012 R2. What isn’t supported? XP, Vista, Server 2003, and Server 2008! While Windows XP doesn’t come as any real surprise, I was amazed at how quickly Vista support was dropped!

Building on this consolidation trend, Microsoft also removed support for Windows Automated Installation Kit (AIK). As you will recall from our Deploying Windows 8 series, MDT 2012 Update 1 supports AIK and/or the Windows Assessment and Deployment Kit for Windows 8 (ADK). MDT 2013 Preview supports ADK for Windows 8.1 as the primary Windows toolkit.

Microsoft has continued to migrate features from MDT to SCCM. Where it was pretty much a must to integrate MDT into your SCCM OS deployments, MDT features (such as PowerShell tasks or creating dynamic variables) will no longer be exclusive to MDT after the release of SCCM 2012 R2. 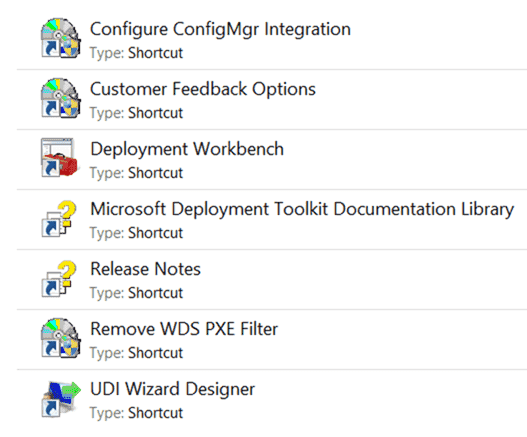 The MDT installed programs, with the UDI Wizard Designer

Though it might sound like Microsoft is cutting any ties with the past, MDT 2013 supports upgrading a previous deployment share. This upgrade process only applies to deployment shares currently running at MDT 2012 Update 1. As always, Microsoft stresses creating a backup of your MDT infrastructure first.

In the past, I have had hardly any issues running MDT previews in a production environment. While I know that running a preview this way is ill-advised, the benefits can outweigh this. This is particularly true if you are wanting to deploy the latest Microsoft OS (or OS Preview) for testing purposes or if you want to integrate the latest version of Microsoft DaRT.

Known issues with MDT 2013 range from Task Sequences failing after changing the OS reference image to the domain join task erroring out because of special characters. In our environment, two problems have made me weary. BGInfo, which we use to display relevant information while the machine is imaging, is missing from the tools folder (both X86 and x64). The second issue is with the Apply Local GPO Package task. It will fail because the Security Compliance Manager GPO packs are missing from the deployment share.

Microsoft has promised to fix these issues and have documented them in the updated release notes for MDT 2013 Preview. The release notes also contain workarounds for most of these problems. For example, the BGInfo and GPO pack issues can be fixed by manually downloading the respective programs and storing them in the deployment share.

Within the Deployment Workbench, you are unlikely to notice any changes. Besides a new version number (and the ADK 8.1 requirement), I didn’t see anything different.

To start testing MDT 2013 Preview in your environment, you will certainly need to grab these downloads: