In 2014, Amazon’s worldwide market share was 28 percent and, in Q4, it reached 30 percent. Microsoft strengthened its second position with a market share of 10 percent in 2014. Synergy Research didn’t mention Microsoft’s market share in Q4, but, according to the diagram below, it was about 11 percent. IBM is still third, with 7 percent in 2014, and Google now leapfrogged Salesforce and occupies the fourth position, with 5 percent. 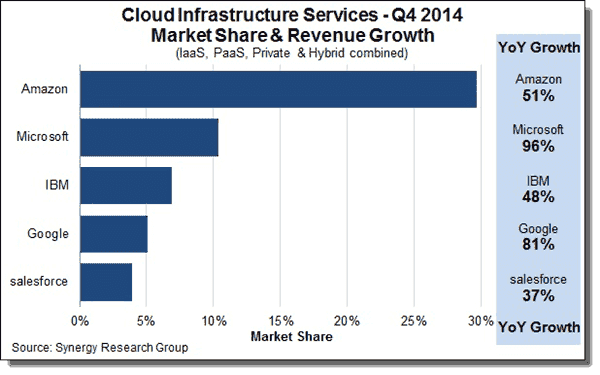 Last May, I blogged about Synergy’s Q1 numbers. I think it is interesting to compare the two diagrams. 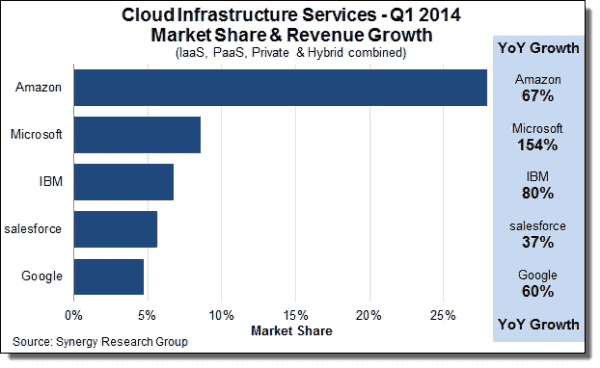 By just looking at the diagrams, you can see that Microsoft is increasingly pulling away from its pursuers. You can also see that, even though Amazon’s market share is growing, Microsoft is getting closer because it grows much faster.

However, it is also obvious that the growth of most cloud juggernauts has slowed. The entire market is growing, at about 48 percent, which means that only Microsoft and Google are still able to grow much faster than the cloud market. Google could even increase its growth rate from 60 to 81 percent. However, according to Synergy, Microsoft's growth rate of 154 percent in Q1 shrunk to 97 percent in Q4.

It is hard to tell if seasonal effects play a role here or if the growth of the cloud is decelerating. However, according to Microsoft’s own numbers, which in contrast to Synergy’s numbers also include Office 365, the growth rate is still 114 percent.

It is possible that we will reach a point where the market is saturated, where further growth is only possible at the expense of competitors. However, if the cloud companies continue to innovate and new services are introduced, the growth rate might accelerate again. I am thinking of new technologies such as Microsoft HoloLens and virtual reality, which even Microsoft boss Nadella thinks is the new desktop.

Wouldn’t it be cool if you could transfer a few hundred servers from one datacenter to another by grabbing them in a virtual 3D projection and moving effortless tons of virtual hardware across the planet with a simple swipe of your hand? Seriously, 3D is coming, and we will need lots of computational power that only the cloud can provide.

More and more evidence exists that, because of the laws of quantum physics, Moore’s law could come to an end soon, which means that growth in computational power can only be achieved by building bigger devices. These devices will not fit in your pocket or on your desktop. Even your server room will be too small. If scientists don’t come up with new workable alternatives to conventional silicon-based computation, sooner or later all noteworthy computation will take place in the cloud. Then, Microsoft’s “mobile first, cloud first” mantra would turn into a “cloud only” strategy.