After Microsoft's latest earnings report it is obvious that the Redmond software giant is now a true cloud company and no longer just the Windows and Office maker. If you are still working in a conventional IT environment, you might want to get started now with learning about the cloud before it is too late and your expertise becomes obsolete.

If you have been working with Amazon's cloud before and want to get an overview of Azure, you should take a look at this series (see videos below). Many concepts of the two leading cloud providers are quite similar. However, the terminology and, of course, the names of the services, sometimes differ. 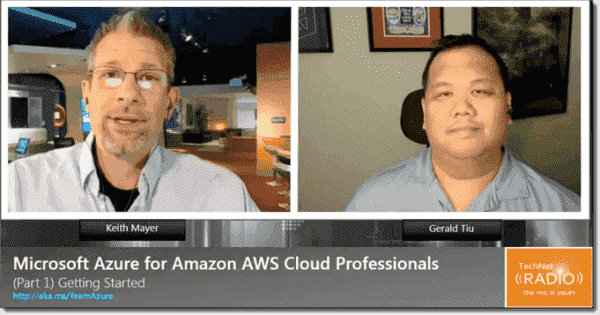 The series can also serve as a general introduction to Azure, although I feel that without any background in cloud computing, you will sometimes have difficulty following these two cloud experts.

Needless to say, these five videos, with a length of 40 to 60 minutes each, can't really cover all the services that Azure and AWS have to offer. Both providers have been adding new services at an incredibly high pace although lately, it appears to me that Microsoft has been even more ambitious than they have.

Although AWS and Azure have many things in common, there are still some major differences between them. AWS traditionally targets startups of the new economy that run their web-based applications in the cloud, whereas Azure is the first choice of Microsoft shops that want to move parts of their conventional on-premises IT to the cloud.

However, both cloud providers try hard to take away each other’s traditional customers. Microsoft Azure has continuously improved the support for the Linux ecosystem and web applications that are not based on ASP.NET, while Amazon AWS has introduced new services that target Microsoft shops such as cloud-based versions of Active Directory or SharePoint.

I've been working with AWS long before Microsoft introduced Azure, and I have always been very fascinated by Amazon's cloud. I still feel more at home in AWS than in Azure; however, I am currently more and more attracted by Microsoft's cloud. Why? PowerShell.

In the long run, I believe that PowerShell could be Microsoft's main weapon against Amazon. AWS supports PowerShell too, but of course it is not really a match for Azure's version. A few weeks ago, I wrote a little bash script for cloning EC2 instances, and I must say that I really missed PowerShell's object orientation, which simplifies the management of cloud objects tremendously.

In any case, enjoy the Microsoft Azure for Amazon AWS cloud professionals video series below.