Alex Chaika  Fri, Jun 17 2016Fri, Jun 17 2016  powershell, powershell scripts, virtualization, vmware  16
The PowerShell script (using PowerCLI) I discuss in this post maps virtual disks of a VMware vSphere host to volumes on Windows drives. This information is useful if you have to extend the storage space of Windows volumes.

Let's say I have a VMware VM with Windows Server as the guest operating system. The host has three SCSI controllers and 10 drives on each controller. Some drives have different sizes and some are the same.

At some point, the drive space runs low and you're looking at the ticket to add space to the volumes of a VM with tens of virtual disks. Of course, the admin working on this server just sees the Windows volumes. But to complete this task successfully, I need to know how the Windows volumes correspond to VM disks.

If you are looking at the VM from the VMware vSphere client, everything looks nice and simple: 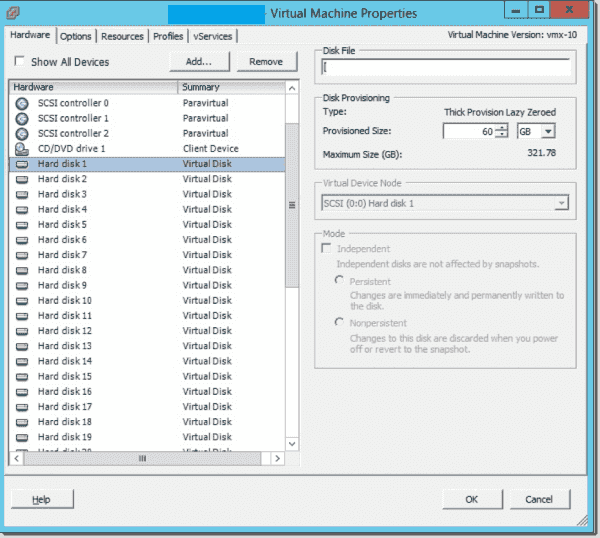 But when you looking on the drives from Windows, you'll notice the problem. 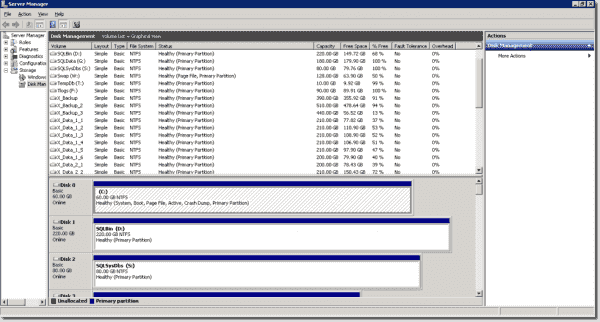 As you can see in the above screenshot, SCSI controllers are not visible in Windows Disk Management. For instance, if I have three different Windows volumes that I want to expand and a bunch of other drives, some of them potentially having the same size as those three, how am I going to determine where I need to add the space? There is no explicit dependency between the VMware virtual drive number and the drive number in Windows.

That’s where PowerShell can help. The script below gets all drives from the VMware virtual machine and the corresponding Windows guest, matches them to each other, and then saves the result to the .csv file.

Let’s go line by line through the script.

The first two lines add the VMware PowerCLI snapin to the current session and create a connection to the VMware vCenter server.

This one is just getting the VM object data and storing it in the $VM variable.

Those two lines above create hash tables to save the VMware and Windows SCSI controllers and drives’ data.

There is no way to get the SCSI controller data from the VMware VM using default fields, so I’m kicking the Get-View cmdlet to retrieve the corresponding .net object information.

The loop above gets all SCSI controller data from the VM and iterates through them.

Now I’m doing something similar to the previous operation with all the VM disks. I iterate through the disks to find those that are connected to the SCSI controller from the previous loop.

I now have all the needed information about the VMware SCSI controller and disks. Next, I have to get the same kind of data from Windows.

Now comes the trickiest part. VMware and Windows have different starting numbers for SCSI controllers. VMware always begins with 0 and Windows just uses an arbitrary number. The Windows numbers are incremented one by one from the start number, which can’t be less than 1.

Here, I’m looping through the $VMSummaries hash table records and then again through the contents of the $Disks variable to compare the disk and controllers data I’ve taken from VMware with the information I got from Windows.

Once I know that this is the right SCSI controller, I need to compare the disk's SCSI target ID. Fortunately, those numbers correspond to each other in VMware and Windows, so I don’t need to do any transformations. If the controller number and the disk number are equal, I’ve found the right drive. Now is the time to save the information:

As you can see, I’m putting information about the corresponding VMware and Windows drives into the hash table.

The very last line exports all gathered information into a .csv file. At the end, we have a nice table that maps two sets of drives together.