Jim Jones  Mon, Jun 3 2013Mon, Jun 3 2013  virtualization, vmware  0
Over the past few weeks we’ve been looking at the various components of the vSphere infrastructure. Today we’re going to take a look at the vCenter Web Client.

Why is this important?” you may ask. “I’ve been using my trusty VI Client for many years and it works just fine.” While this is a true statement, the reason we VMware admins need to start looking hard at the Web Client is that there are a lot of whispers that 5.1 was the last release to support the VI Client that the Web Client is the way forward. I will say that I’m not entirely positive that this isn’t wishful thinking to a point because I don’t believe it to be a solid product as yet, but at some point in the near future this is going to be what’s you got. 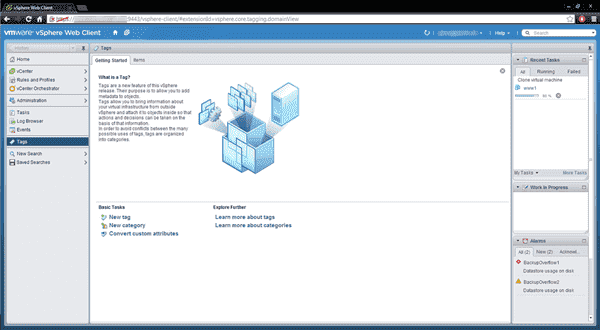 There are a few requirements to setting up the vCenter Web Client. Like everything else you are going to have to have vSphere Single Sign On configured and functional and the Inventory Service and vCenter server are running 5.1. Make sure that if you have multiple SSO domains configured that this resides in the same one as your vCenter Server.

With all that said for most of us in the SMB space a single Windows server with all of the vCenter components running on it (vCenter Server, Inventory Service, Web Client and Update Manager) is a perfectly acceptable setup as well. We previously walked through this setup in a previous article.

From the client point of view one of the nice things about the latest patches of 5.1 is that pretty much every modern browser is now supported, but keep in mind this is a Flash application so you will need to have it installed with all of its given security issues as well.

To access the vCenter Web Client you will simply need to browse to the https://myvcenter.domain.com:9443 URL with you substituting in the FQDN of your vCenter Web Client server. Once you authenticate in (use the same credentials you would use with the VI Client) you will be presented with the home screen shown at the top of this article. Your navigation on the left side of the screen is split into various sections which should all look relatively familiar to you. On the right side of the screen you can see a list of your recent processes, notes and alarms. This is similar to the bottom part of the screen in the VI client.

What is new here is the ability to tag and categorize your VMs, allowing for easy access to different groups of VMs regardless of location. If you’ve used a modern photo manager in Windows this is very similar. Another thing leading use to use the Web Client over the VI client is that this is now the only place to see license usage reports. This is available under Administration > License Reports.

For most of your day to day use you will need to look under the vCenter navigation entry. Here you will have drill down access to your datacenters, clusters, hosts, and virtual machines as well as other infrastructure items such as datastores and networks. I’ve been trying to use the Web Client for the past couple of days exclusively and most things you will need to do is now available for Virtual Machine administration. You can even launch the console or clone a VM from here.

While a Web Client is great and seems to be the way VMware is going I question the thought to base it on Flash with its nasty reputation. Further the biggest thing you will find missing is the various plugins, even those from VMware. At this point there is no way to use Update Manager from within the Web Client and a quick browse through the developers community for plugins shows a host of issues developers are trying to work through. For this reason you can expect a hybrid administration setup for at least a little while.