Timothy Warner  Wed, Jul 8 2015Wed, Jul 8 2015  powershell, virtualbox, virtualization  1
Windows PowerShell MVP Jeff Hicks wrote a neat PowerShell module that gives us a head start on managing VirtualBox virtual machines (VMs) programmatically. Jeff clearly put a lot of work into that project (the commands even include comment-based help!), but as we’ll get into later, there are some gaps that we in the PowerShell community may want to fill. Let’s begin.

Download Jeff’s PSVirtualBox module and place the extracted folder into your PSModulePath:

Now we’ll invoke Get-Command to see what functionality Jeff added to his module:

I know Jeff. He is not, by his own admission, a .NET programmer. Therefore, Jeff wrote advanced functions to give us the functionality. That fact doesn’t affect us as end users, however, because PowerShell advanced functions behave the same way as C# or VB cmdlets do.

What’s great about Jeff’s use of advanced functions is that he makes the project source code available to us, as shown in the following screen capture: 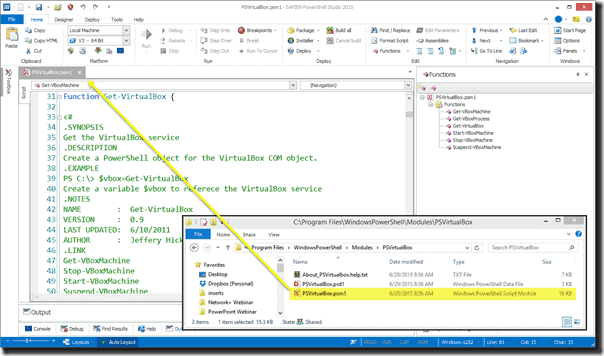 We can modify the PSVirtualBox source code.

NOTE: Be sure to provide proper attribution if you modify and re-release Jeff’s PSVirtualBox project. Jeff told me a few months ago that he set up a GitHub repository for this project.

The Get-VirtualBox command simply echoes a bunch of metadata concerning the VirtualBox COM object. If you’re a developer, then I’m sure your hackles rose a bit at my mention of Component Object Model (COM).

Believe it or not, VirtualBox doesn’t have a .NET Framework–based entry point. Instead, it uses the antiquated COM interface. That fact severely limits the degree to which we can interact with VirtualBox VMs.

So far, so good! As you can see below, my VM started right up and I’m ready to roll. 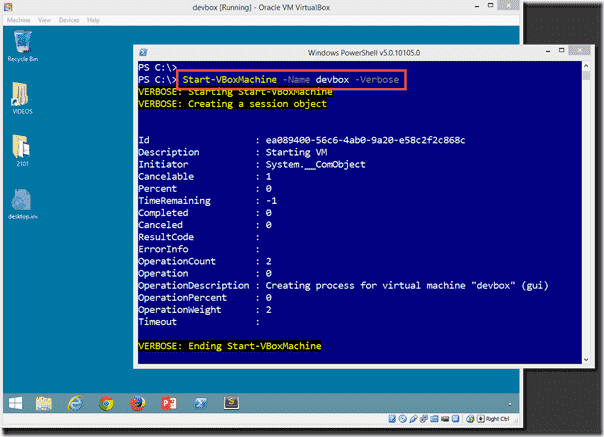 Starting a VM with Windows PowerShell

Jeff also added a -Headless switch parameter to Start-VBoxMachine if you don’t need the GUI.

We can take advantage of the PowerShell pipeline to suspend our virtual machine:

Now we see that our VM displays in a Saved state:

To bring this full circle, we’ll resume the saved VM: 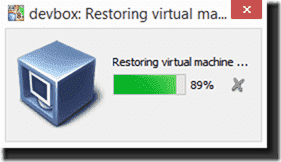 In keeping with Windows PowerShell development best practices, Jeff documented all the module commands, including examples. So, for instance: 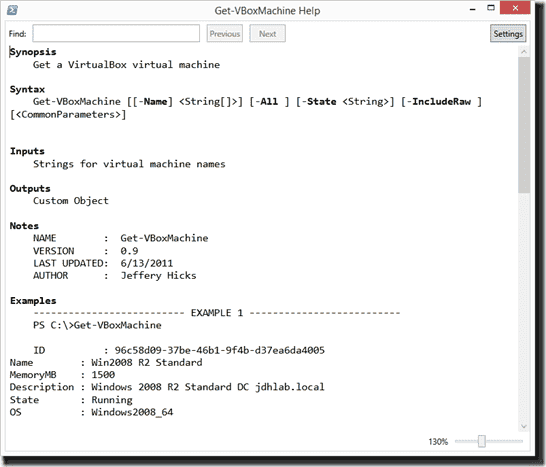 You can learn a lot by reading PowerShell documentation.

Jeff’s PSVirtualBox module is a fantastic head start, but in my opinion it needs much more work before we can consider it a fully functional project. Here’s what I think we need:

Add more robust VM metadata. I’d like to see all VM properties and settings from PowerShell instead of just the name, OS, and RAM.

Create new VMs. This is perhaps the most obvious omission from the module. Once we can deploy new VirtualBox VMs from PowerShell, we’re really cooking with gas.

Verify networking. As you probably know, hypervisors have software-defined networking (SDN) that can involve Internet access, VM-to-host access, and VM-to-VM access. It would be awesome to do SDN testing from within PowerShell.

The way you can get involved in the PSVirtualBox improvement project is to fork Jeff’s PSVirtualBox repository at GitHub. By doing this, you’ll accomplish the following goals: