Timothy Warner  Mon, Jul 13 2015Mon, Jul 13 2015  file tools, powershell  18
Setting NTFS security permissions from Windows File Explorer is fine when you’re dealing with a single server. It’s another situation entirely, however, when you need to modify NTFS security on 100 folders spread across 20 servers. For these administrative tasks, we rely on Windows PowerShell to get the job done quickly, accurately, and easily.

Unfortunately, even the Windows PowerShell v5 April 2015 preview contains only two cmdlets related to access control lists (ACLs), and they are pretty weak:

Begin by downloading Raimund’s module from the TechNet Script Center and unpacking the ZIP file to a folder named NTFSSecurity in your env:$PSModulePath location. By default, your PowerShell module path is:

Here’s a picture from my Windows 8.1 administrative workstation: 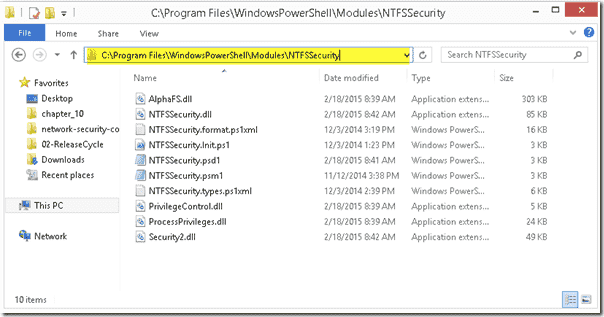 Make sure your PowerShell modules are stored in the proper location.

You’ll note that Raimund’s NTFSSecurity project is quite a bit more complex than other custom modules you might have seen, including several dynamic link libraries (DLLs) and such. More to the point, Raimund leverages the AlphaFS library to give him easier access to the .NET Framework’s NTFS access features.

The final preliminary ingredient we need here is a folder and some files to play with. I created a folder named dox in the root of drive C: and populated the folder with a subfolder and a bunch of dummy files. Look here: 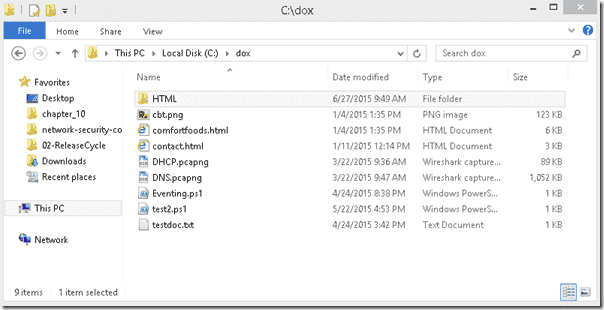 We need some files to play with.

Okay—no more File Explorer. From now on, everything we do will be from an elevated Windows PowerShell console session, with a bit of Out-GridView thrown in for good measure. Let’s begin!