Prateek Singh  Tue, Aug 28 2018Thu, Aug 30 2018  file tools, powershell, powershell beginner  18
In this post you will learn how to perform various disk management tasks with PowerShell. I will explain how to list disks, format disks, initialize disks, and create and delete volumes and partitions.

Before you can begin configuring and managing your Windows Server storage, you first need to fetch the list of disks presented on the machine using PowerShell. 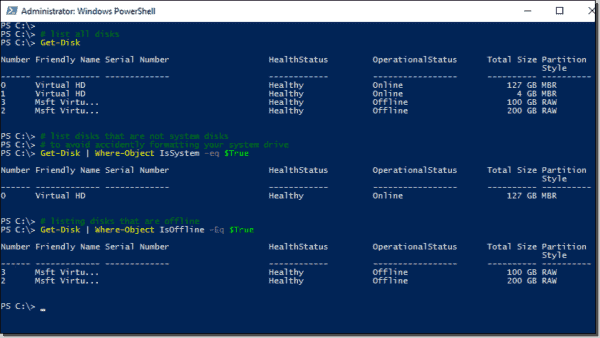 Having new disks present on the server is a totally different case, but there may be scenarios where you want to format existing disks and then create partitions and volumes. You can use the Clear-Disk cmdlet to remove all partition information and uninitialize it, which will erase the data on the disk.

This is an unrecoverable process, so please make sure to back up your disk before running the command.

Disks can contain both data and OEM partitions, and you can very easily remove them from the disk using the switch parameters -RemoveData and -RemoveOEM.

A new disk or a cleaned disk using the cmdlet mentioned above is in an uninitialized state, and you have to initialize it first using the disk number of the target disk.

By default, this initializes all disks as GUID Partition Tables (GPTs) unless explicitly specified, and you can use the ‑PartitionStyle parameter to initialize a disk as a Master Boot Record (MBR).

If the disk has recently just become present on the server, it will be in a raw partition style state. You can easily target and initialize such disks using the following command:

Create a partition and volume ^

To create a partition, which is basically a block of data on the disk, you can run the New-Partition cmdlet with the ‑AssignDriveLetter and ‑UseMaximumSize switches to choose the available and allowed drive letter with the maximum size available on the disk.

You can also explicitly specify the disk size and drive letter.

After partitioning the disks, you can list them to see the current status:

After creating the partitions, they are still not accessible from the File Explorer. You have to create new volumes in a format (like NTFS) that the operating system understands.

To delete any partition on a disk, you can target it with the disk number and then pipe it to the Remove-Partition cmdlet 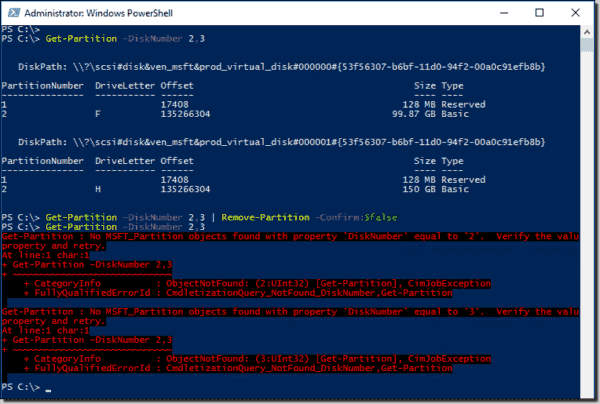 After presenting a storage disk on a Windows machine, it is very easy to initialize raw disks and bring them online using PowerShell. With just a few PowerShell cmdlets, you can also create partitions and volumes so they're accessible through the file system. 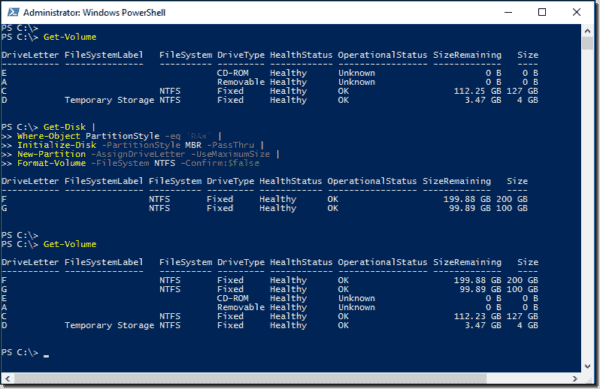 Leave a reply to Leos Marek (Rank: 4)
Click here to cancel the reply