As a central key management service, a Key Vault has the following capabilities:

There are basically three elements used in Key Vaults: keys, secrets, and certificates. Keys are the elements mostly used for encryption while secrets consist of authentication keys, passwords, and storage account keys. You can also store certificates in Key Vaults for many different purposes, such as encryption, authentication, and authorization.

The following commands can list existing Key Vaults in detail: 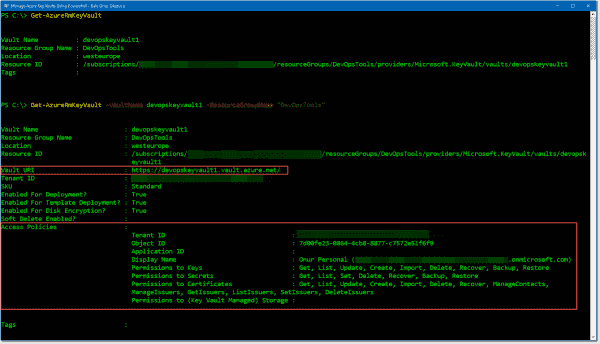 You may have noticed each Key Vault has access policies. These allow administrators to define delegations flexibly over keys, certificates, secrets, and managed storage. Access policies apply to principals, such as user and applications. Different users can have different permissions for the same Key Vault. Basically, one permission can manage keys while the other can manage certificates in a particular Key Vault.

Each Key Vault in Azure must have a unique name across the internet. That's because Azure assigns Key Vaults unique Uniform Resource Identifiers (URIs) based on the name specified upon creation. Therefore, Azure will use that Key Vault name as the prefix in the vault.azure.net domain. 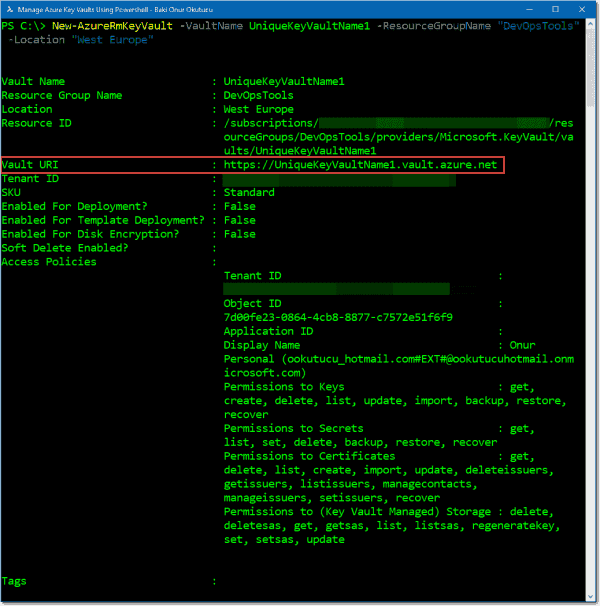 After creating a Key Vault, you can then manage secrets, keys, and certificates for various tasks.

You can create a new secret with these commands:

You can now use this secret as a secure string (such as a password) by calling it directly from the Key Vault instead of having to specify it in a script as plain text. This is pretty useful, especially for storing administrator credentials securely.

To get the secret value text back from the Key Vault, use the following:

Getting secret value in plain text

You can use the following commands to create a new Key Vault key (RSA key). There are two options here: software keys and hardware Keys. If you want to use your organization's own HSM-protected keys, you need to use the Hardware value as the Destination.

You can now use this key for the following operations:

To create a new self-signed certificate in Azure, you can use the following:

Note that it may take some time for the certificate to appear in Azure portal.

Creating a new self signed certificate in a Key Vault

After a couple of minutes, you can get the details with the following command: 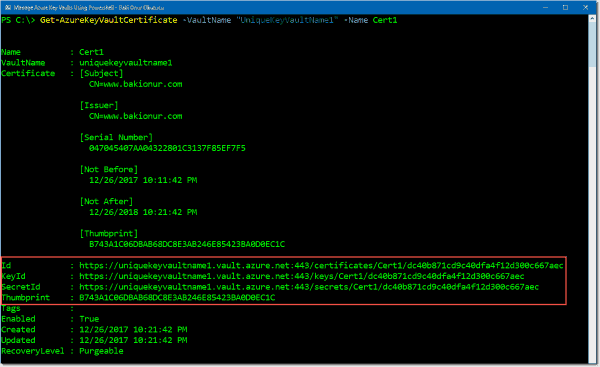 Getting the certificate details

And with the following command, you can import an existing .PFX file into Azure: 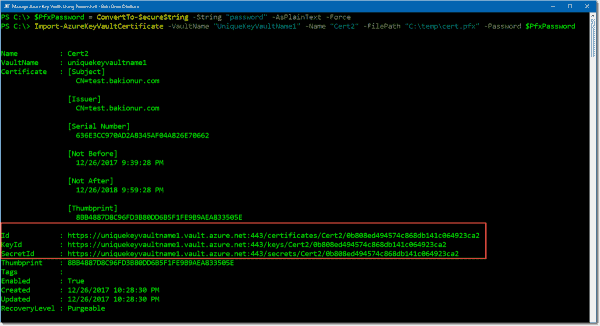 Importing an existing .PFX certificate into a Key Vault

When importing a certificate into Azure, the certificate key becomes a Managed Key. It then appears under both the Keys and Certificates sections.

The below are the most used scenarios

We’ve had a quick look at the Key Vault fundamentals. Indeed, many more combinations are possible with Key Vaults in Azure environments.