Baki Onur Okutucu  Thu, Mar 18 2021Thu, Mar 18 2021  azure, cloud computing, powershell, security  0
Azure Key Vaults are essential components for storing sensitive information such as passwords, certificates, and secrets of any kind. Because the data stored in Key Vaults is sensitive, only authorized users or applications should be able to access them. At that point, we have two options to manage access control: traditional vault access policies and new role-based access control (RBAC). In this post, we will be looking at the new RBAC model on Azure Key Vaults and how we can manage access with RBAC using PowerShell.

Previously, the biggest downside of managing Key Vault access was the need to configure two things to give someone access to secrets, keys, or certificates in a particular Key Vault. First, we had to grant permissions on the Key Vault resource in Azure using access control (IAM); then we had to create a separate access policy in the Key Vault granting the user the appropriate permissions on objects such as keys, secrets, and certificates.

This model does not give us granular access management on individual secrets, certificates, or keys. This means that when someone has Read access on secrets specified in a Key Vault access policy, they can access all the secrets in that Key Vault.

Creating a new Key Vault with the RBAC permission model ^

We will be using the following command to create a new Key Vault with the RBAC permission model. There is a new parameter, EnableRbacAuthorization, which configures the Key Vault to use RBAC authorization instead of traditional vault access policies.

Once created, we can see that the permission model is set as "Azure role-based access control," and creating an individual access policy is no longer allowed. 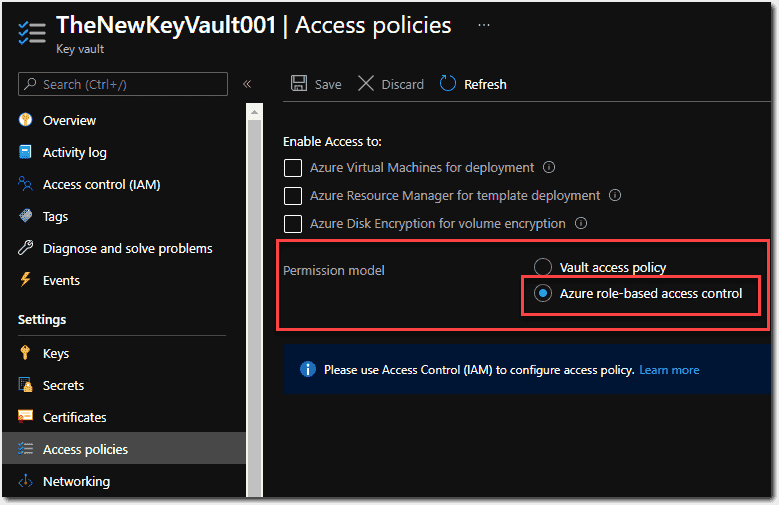 Azure role based access control as the permission model

Updating an existing Key Vault to use the RBAC permission model

We can also update an existing key vault to use the RBAC permission model using the following PowerShell command:

To change RBAC permissions, we need the Microsoft.Authorization/roleAssignments/write permission, which automatically comes with the Owner and User Access Administrator roles.

Warning on updating the permission model

Now, let's create a new Key Vault secret with the below.

Creating a new secret in a Key Vault

We can now assign a user an appropriate Key Vault role on that specific secret. First, to get the built-in Key Vault roles, we can use the following:

To assign the user the "Key Vault Administrator" role on the secret "SuperSecret," we will run the next command. "ObjectID" in the following command represents the object ID of the user, which can easily be found in the user properties in Azure AD.

Creating a new role assignment on an individual secret

So, the user is now on the access list of the individual secret, "SuperSecret," with the "Key Vault Administrator" role.

Now let's use another secret named "AnotherSuperSecret," but this time the user that has been allowed access on the first secret will not have permission on this one.

As expected, the user cannot access the second secret, as no permissions are allowed.

Similarly, we can do the same on keys and certificates by assigning users with the appropriate roles on a specific key or certificate using the correct scope.

To assign a user the "Key Vault Certificates Officer" role on a specific certificate, we can use the following:

A new role assignment on an individual certificate

And to assign a user the "Key Vault Certificates Officer" role on a specific key, we can use this:

A new role assignment on an individual key

Key Vaults are essential and need to be secured as much as possible by implementing strong permission management. Azure now allows us to use the new RBAC permission model to assign permissions granularly and flexibly to users or applications with new built-in roles on individual secrets, certificates, or keys.