Anil Erduran  Wed, Oct 19 2016Fri, Oct 21 2016  powershell, security  1
Just Enough Administration (JEA) is a new extension in the Windows Management Framework that allows you to restrict the rights of IT admins in remote PowerShell sessions. In this first part of my JEA series, I will give an overview of the basic concepts.

Jeffrey Snover used the Snowden case to explain the main point about JEA. 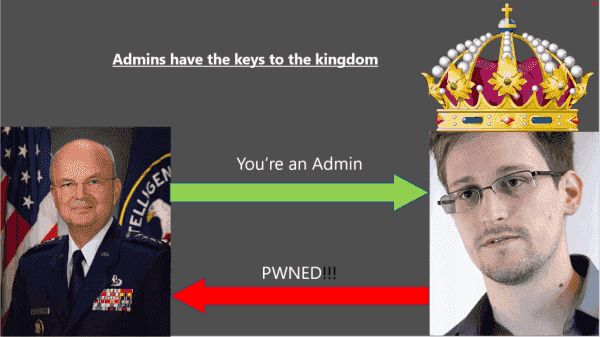 Michael Hayden (left) was the director of the National Security Agency (NSA) from 1999 to 2005 when Edward Snowden, a simple admin, revealed thousands of classified NSA documents to the public. Admins have full permissions to all data. Thus, they have all of the keys to the kingdom.

To date, Microsoft has provided many different ways to help organizations have delegated administration for different tasks. The role-based access control (RBAC) model used in a couple of different Microsoft products provides granular level control over resources. Using the RBAC model, we were able to define roles, specify tasks for each role, and assign users to these roles, but even the RBAC has some limitations when it comes to defining only the required tasks for users without giving them administrator rights. The RBAC process usually results in providing more access than is required.

JEA is a new way for organizations to create secured PowerShell remote endpoints to restrict IT admins’ rights as much as possible. Using JEA, admins can only perform required tasks without being given unnecessary administrator rights.

Use cases for JEA ^

I can think of many use cases for JEA:

This is where you can have more granular control on PowerShell remote sessions.

Session Configuration is a file that defines local environments for Windows PowerShell sessions that are used by remote users to connect to this computer. You can create custom environments and determine the permissions for remote users on local resources. For instance, you can limit the size of the objects in a session, change the language mode, or specify a set of cmdlets that can be used in that session.

Session Configuration files are used in session configurations to define the environment. They have the file extension .pssc and include all properties of the existing session in a hash table. 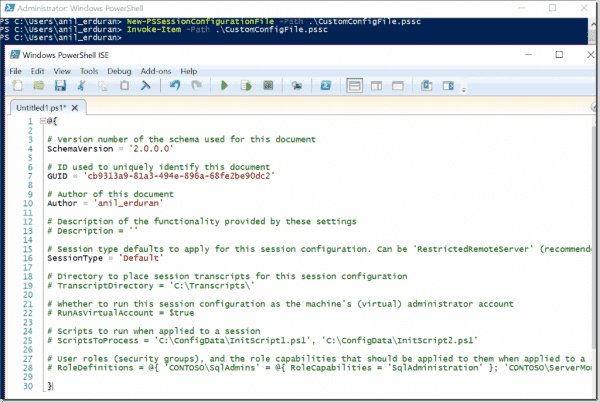 To learn more about constrained endpoints and configuration files, you can read this article at 4sysops.

JEA is an addition to constrained endpoints which adds additional capabilities, like role definitions, and makes it a lot easier to restrict your target session endpoints in PowerShell remote sessions. In short, JEA allows admins to perform administrative tasks without giving them unnecessary administrator rights. JEA started as a bolt-on feature in Desired State Configuration (DSC), but now it’s a separate feature available in Windows Management Framework (WMF) 5.0.

It’s the latest update in Windows Management Framework 5.0 to enable extended role-based control through widely used PowerShell remoting technology. JEA is based on the PowerShell constrained session I mentioned before. It’s fully integrated with PowerShell, which means anything you are currently managing with PowerShell can be managed with JEA as well.

JEA is actually implemented as a PowerShell session endpoint, and this endpoint consists of a Session Configuration file and Role Capability files.

The Session Configuration is a file with a .pssc extension which defines who can connect to an endpoint. Within the .pssc file, you can configure users, groups, virtual accounts (one-time privileged accounts), and general high-level settings.

On the other side, the Role Capability file (.psrc) defines actual responsibilities for each defined user, including which cmdlets or functions can be run or, in short, what an admin can do in a session.

Think of .pssc files as a place where you can define general settings and plus role definitions. You can use the role definition line to associate user roles (security groups) with role capabilities. The example below assigns the security group JEA_CustomGroup to the HyperVOperators RoleCapability.

Native PowerShell commands are more than enough to create JEA endpoints which include Session Configurations and Role Capability files. We will cover the session file and role capability file creation process in the next part of the JEA series.

WMF 5.0 is also available on the following client operating systems:

In the next part of this JEA series, we will have a look at creating your first JEA endpoint by following one of the use cases: Assigning appropriate rights to DNS admins.