Is Apple more valuable than Microsoft? 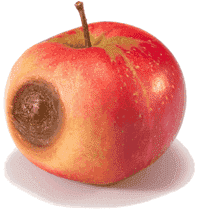 Ed Bott wrote an excellent analysis about the news that kept the media busy for the last couple of days: Apple's market capitalization passed that of Microsoft. Most commentators attribute this to Microsoft's failures and in particular to Steve Ballmer, which is a bit strange considering that Windows 7 is the bestselling operating system ever. Ed Bott correctly realized that the whole PC industry wasn't doing any better than Microsoft. I am not an analyst, and 4sysops is not a blog about the philosophy of IT. But I can't help myself saying a word about this topic because Apple has become one of my favorite rant topics.

Meanwhile the whole computer industry understands that the growth rates of the past can no longer be achieved in the PC market. Jobs was one of the first who understood this. This is why everyone focuses now on the market of mobile Internet devices. Because of the self-inflicted isolation, Apple will now be alone against the whole PC industry, handset makers, Microsoft, and Google. If Jobs won't find another new market soon, the Apple bubble will burst once again, a case of history repeating itself.

Thanks to Steve Jobs, Apple was often ahead of its time. I think the reason is that contrary to Gates, Dell, & Co. he doesn't really search for new profitable markets. He just finds them accidentally. What Jobs really seeks is attention. He is like a religious leader who wants to be admired for his stylish style and not for the market shares of his products. The problem is that once he finds a new market, this strong need to be someone special prevents him from keeping control of the market after the competitors enter the game.

Thus it is only a matter of time until the iPhone and the iPad will just be isolated platforms and the masses will buy the cheaper and more powerful devices from Apple's competitors. Perhaps this time it will be Google, not Microsoft, that beats the Jobs company. It is not unlikely that the Apple will go bad again then, but I doubt that this will really hurt St. Jobs. As a martyr, he will just get more attention and once more he will have the chance to rise from the dead which will only increase the number of his followers.