Desktop-as-a-Service (DaaS) is a VDI subset concerned with delivering Windows Client sessions to multiple users. I have to laugh when I think of this because I'm old enough to remember mainframe computing with "dumb" IBM terminals: essentially an amber monitor, a keyboard, and a network connection to the mainframe. How cyclical information technology is!

Anyway, the DaaS story in Microsoft Azure has been, shall we say, a bit weak historically. More recently, Microsoft and Citrix teamed up to cover application virtualization (see Citrix Virtual Desktops Essentials). You might remember that Microsoft did give us Azure RemoteApp before they killed it off in favor of Citrix's offerings. Nevertheless, some businesses need to stream Windows 10 desktops to their users to cover common use cases:

Until Microsoft's Ignite 2018 Windows Virtual Desktop (WVD) announcement, our only choice for desktop VDI was to deploy a Windows Server Remote Desktop Services (RDS) farm to a virtual network in Azure. This is a daunting task for a Windows systems administrator who does not already have a deep grasp of how Azure software-defined networking (SDN) works.

It seems to me that both customer demand and pressure from competitor Amazon Web Services with their Amazon Workspaces VDI offering led Microsoft to give us Windows Virtual Desktop­­­­­­. Let's dig into this new feature expected to reach GA status in early 2019.

As of this writing in late November 2018, Microsoft hasn't said too much about WVD publicly. You can register for the public preview to be among the first to test the product prior to GA. I also found a links list that is probably the best WVD background information on the internet presently.

First, Windows Virtual Desktop is a multiuser (that is, multisession) platform for delivering both Windows 10 Enterprise and Windows 7 Enterprise desktops to your users from Azure. The "multisession" is important because the goal here is to deliver Windows Client desktops to users, not Windows Server desktops. Recall that Windows Client historically allowed only one Remote Desktop Protocol (RDP) session at a time.

Windows Virtual Desktop runs as a fully hosted Remote Desktop Services (RDS) session host farm, offering both RemoteApps and desktop sessions. The selling point for us admins is that we pay only for the underlying compute and do not have to manage the VDI infrastructure.

Under the hood, Microsoft pools the underlying virtual machines (VMs) that comprise your WVD deployment such that instead of each user being allocated a fixed amount of virtual CPU and RAM from a specific VM, a single VM can host multiple Windows 10 or Windows 7 desktop sessions.

The concern with compute power is relevant because you pay for the underlying VMs as part of your Azure spend. Microsoft says you will have flexibility in the VM sizes you choose for your WVD farm, as well as the user density maximums per VM.

Let's take a look at WVD deployment. From Azure Marketplace we create what's called a host pool, which represents one or more VMs running in a virtual network (VNet). From what I gather, the idea is you deploy your host pool to a VNet and then use a site-to-site virtual private network (VPN) or ExpressRoute circuit to connect to your on-premises environment. You then can join the host pool VMs to your Active Directory Domain Services (AD DS) domain and manage them using your existing infrastructure tools.

As you can see in the following screenshot, you choose your expected workload size and user count, and Microsoft recommends a VM size.

Because your Windows Virtual Desktop farm consists of several VMs, you can manage them by using your existing on-premises (System Center) or Azure-based (Intune or Log Analytics management solutions) administration platforms.

Microsoft says they've exposed all the underlying APIs to give partners (or even you!) the ability to create your own management layer on top of Windows Virtual Desktop. One partner in particular, CloudJumper, appears to be a leading contributor in this space. In the next figure, I show you an Azure portal screenshot where we can customize the RemoteApps users can access from their sessions.

One pathway for users to access Windows Virtual Desktop apps and desktops is to open a browser, connect to their WVD farms, authenticate using their Azure AD credentials (which you can easily synchronize from on-prem AD by using Azure AD Connect), and then choose to stream a RemoteApp or a desktop session. I show you this interface in the next figure. 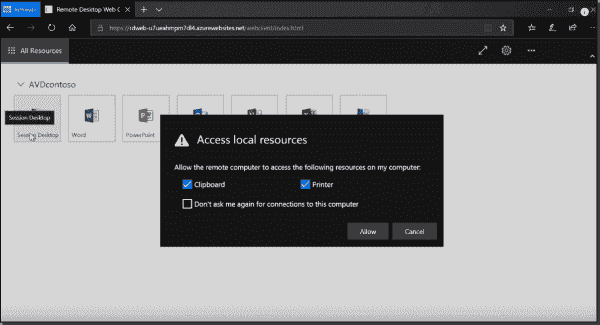 The WVD user experience in a browser session

As you can see in the previous image, users see any RemoteApps published for them. Microsoft states that they put a lot of effort into ensuring the Office 365 ProPlus apps work with minimal latency.

The more seamless WVD deployment is where you can populate your users' local Start menus with RemoteApp and Session shortcuts. I show you this in the next figure. 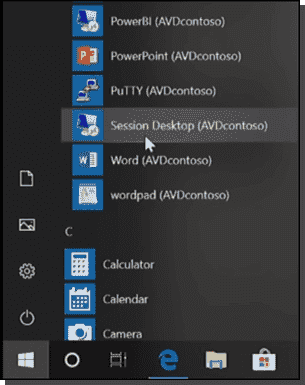 Full disclosure: I was unable to gain access to the Windows Virtual Desktop preview prior to writing this article for you. Thus, I relied upon these Microsoft presentations to generate the screenshots you saw in this article.

Look—I have spent a lot of time helping some of my consulting clients get RDS farms running in Azure. It's not a whole lot of fun, to be sure. I'm excited to see how simplifies this process. Again, you pay only for the underlying infrastructure-as-a-service (IaaS) resources, and use a first- or third-party management layer on top to configure load balancing, app and desktop session details, and so forth.

I suggest you register for the WVD public preview and "kick the tires" for yourself to see if you like the new product. Good luck!