In June 2003, a Microsoft product manager told CNET News that “Safari is turning into a better answer for (Apple) customers.” This statement sounded the death knell for the Microsoft Internet Explorer (IE) Web browser on Apple Mac OS X systems. 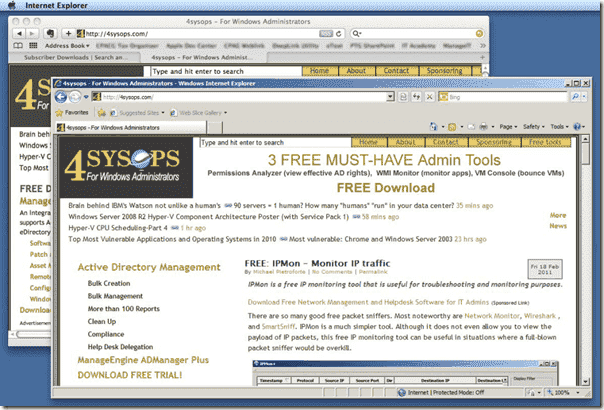 Unfortunately, around the same time Microsoft also killed the Mac version of Media Player. The loss of Windows Media Player doesn’t hurt so much, given the plethora of excellent media players that are native to the Mac (QuickTime, VLC, etc.).

The problem I have with Microsoft’s decision to nuke IE for the Mac is that, as crazy as this sounds in 2011, not all Web sites work with non-Microsoft browsers such as Mozilla Firefox or Apple Safari.

For instance, in my day job I need to access a line-of-business (LOB) application whose user agent detection routine simply roadblocks you from entering the application unless you are using Internet Explorer 7 or later.

In this blog post I will present to you a number of methods that will enable you to run Internet Explorer on a Mac. The first solution is free, but may have variable long-term success for you, depending upon a variety of factors.

I will also give you some IE-on-Mac methods that involve additional cost. After all, sometimes the most reliable solution incurs financial outlay. Let’s get to work!

Wine, short for Wine Is Not an Emulator, is a GPL-licensed Mac application that relies upon X11 and allows Microsoft Windows applications to run under non-Microsoft operating systems.

Here is the high-level procedure to get WineBottler and IE up and running on your Mac OS X system: 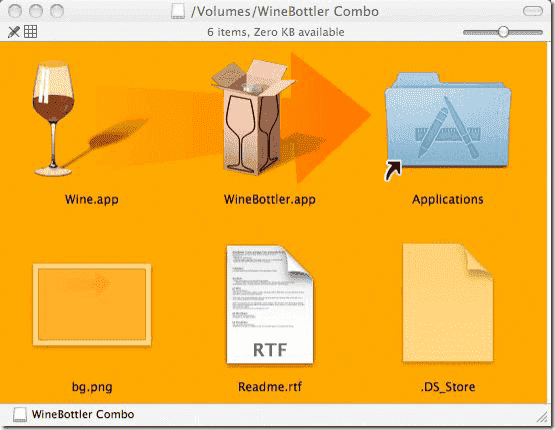 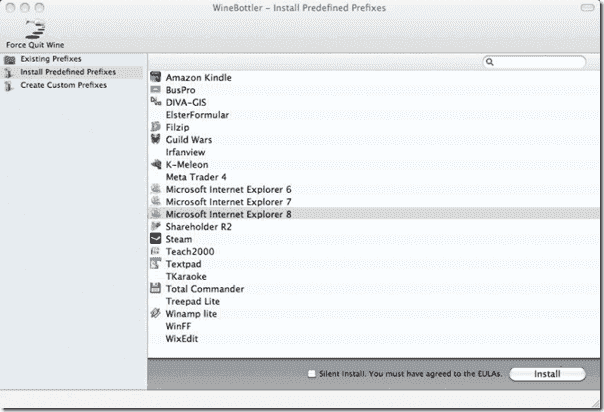 You will be prompted for an installation location (I suggest the Applications folder), after which then the virtualized IE installation will proceed. 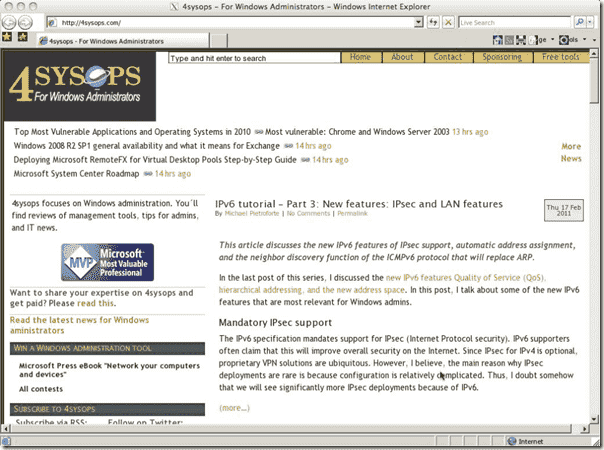 Judging from the above screenshot, which displays the 4sysops Website rendered in a WineBottled instance of Internet Explorer 7, the user interface is nowhere near as pretty (or as functional) as it is in native Microsoft Windows. But hey: it’s better than nothing, right?

Oracle VM VirtualBox is a free x86 desktop virtualization product that is available for Windows, Linux, and yes indeed, Mac OS X. With VirtualBox we can create guest virtual machines that run practically any operating system under the sun—pun intended—, depending upon your penchant for tweaking.

Following is an abbreviated overview for getting Windows 7 and Internet Explorer running on Mac OS X. For specific instructions on how to install and use VirtualBox on Mac OS X, I suggest that you check out the VirtualBox documentation site.

1. Open VirtualBox and create a virtual machine based upon your desired version of Windows. Note that this step requires that you own a license and installation media for that version of Windows. As of this writing, a single-user license for Windows 7 Home Edition is approximately $115.

In order to access your LAN or the Internet from within the virtual machine, you will need to ensure that the VM’s network settings are configured properly. If you need some assistance with this issues, there exist many wonderful tutorials that are only a mouse click away.

2. To browse IE sites, simply fire up your VM, log into Windows, start Internet Explorer, and off you go! If you need to share resources between the guest OS (the Windows-based virtual machine) and the host OS (your Mac computer), then you’ll want to set up the Shared Folders function in VirtualBox. 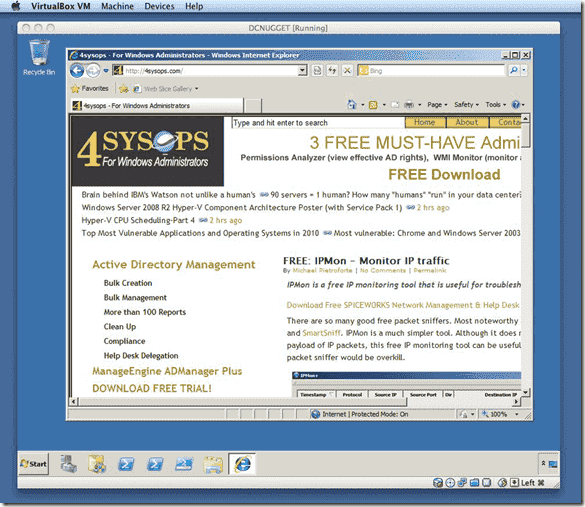 Note that the biggest “Achilles Heel” to the VirtualBox approach is that there is a pretty high degree of separation between Internet Explorer and Mac OS X. That is, we are unable to drag-and-drop resources between the host computer and the guest virtual machine.

Parallels Desktop for the Mac provides hardware virtualization of Windows for Mac OS X-based computers. What is particularly cool about Parallels is that the application appearance is seamless; Windows apps run transparently within Mac OS X as if the “Wintel” apps were in fact native to the Mac.

By using this method, you are financially on the hook for both the Parallels license ($79.99 as of this writing), as well as the license and installation media for Microsoft Windows.

The basic workflow installing and using Parallels is as follows:

1. Install Parallels Desktop for Mac on your system and start it up.

2. Create a new Windows OS-based virtual machine. Make sure to select the Like a Mac integration method. 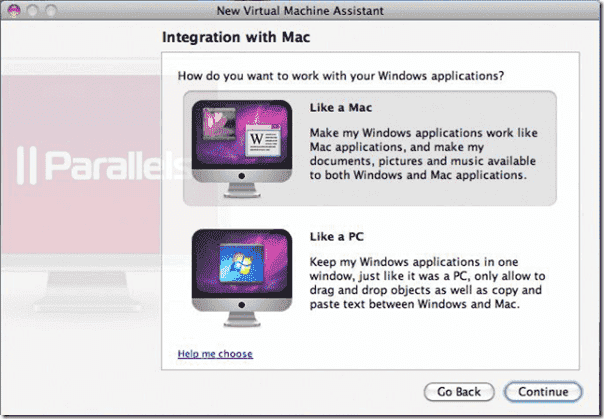 You will be prompted for your Windows DVD or disc image. Install Windows as usual (installation troubleshooting tips here.).

3. Once the Windows VM installation completes, you can launch Microsoft Internet Explorer in what the Parallels team calls Coherence mode. As you see in the below screenshot, IE runs completely side-by-side with your native Mac OS X applications.

While in this blog post we covered what I feel are the best methods for running Internet Explorer on Mac OS X, several additional free and cost-based solutions exist. To that end, please consider the following links to learn more: