Wolfgang Sommergut  Wed, Apr 10 2019Wed, Apr 10 2019  deployment, office  9
When you start the setup of Office 2016 or 2019, it installs all the applications based on some predefined settings. This behavior is often undesirable. Therefore, you can customize the installation using the Office Deployment Tool (ODT) and a configuration file.

Microsoft no longer ships newer versions of Office with an MSI installer, but instead uses the Click-to-Run technique. Therefore, the setup program downloads the installation files from the internet. However, these are also available over local data media as usual. 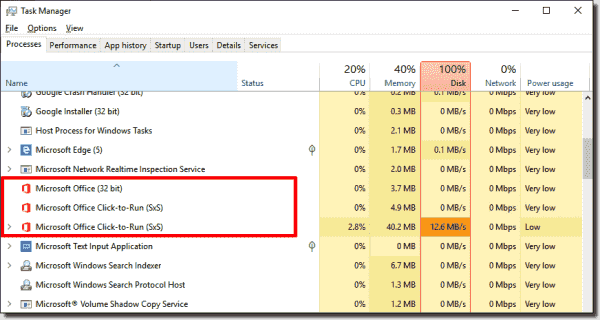 No options for a standard setup ^

Unlike a conventional installation, Click-to-Run by default does not allow you to select which applications you want to install or specify the path where you want to save them. 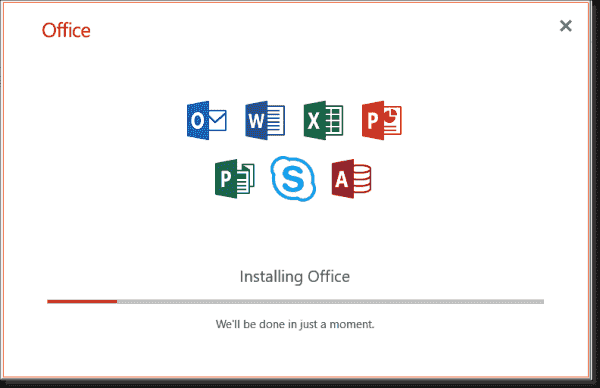 However, if you want to customize the setup, Microsoft offers the ODT for this purpose. It consists of an .exe file that unpacks its contents into the selected directory when executed.

If you want to bypass this procedure and the corresponding User Account Control (UAC) prompt, you can also extract the contained files directly with 7-Zip.

Contents of the ODT ^

The package consists of serveral files: the setup.exe, example configuration files, and a text file with the end-user license agreement (EULA). To prepare for a customized installation, you have to create a new configuration file or edit the supplied template in the next step. 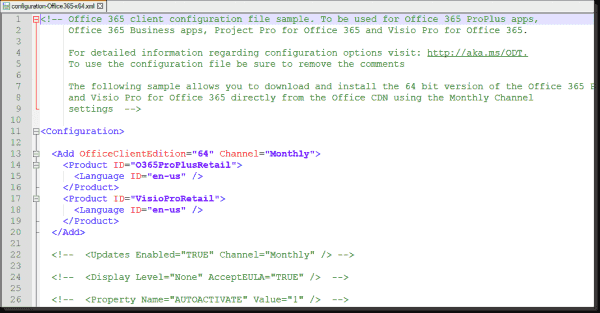 One example configuration delivered with the Office Deployment Tool

It is available in XML format and accepts a handful of elements to control the setup. Under "Configuration" an "Add" node is required. Its attribute "OfficeClientEdition" (with values "32" or "64") determines whether to install the 32- or 64-bit version.

The attribute "SourcePath" points where to retrieve the installation files. If you have mounted the ISO file as a virtual DVD, you specify the root directory of the drive here (for example "D:\"):

Alternatively, you can copy the installation media to a share in the network and enter the universal naming convention (UNC) path.

As a child node of Add, the configuration expects one or more Product elements. These do not describe the individual applications, but the stock-keeping units (SKUs) of Office using the ID attribute. Allowed values for Office 2016 and 365 are, for example:

Office 2019 supports the following strings, amongst others:

This support document contains the full list of all product IDs the ODT accepts.

Another child element of Product determines which applications not to install. For each program you would like to do without, you insert such an element and specify its name in the attribute ID, for example:

Supported values for the applications are: 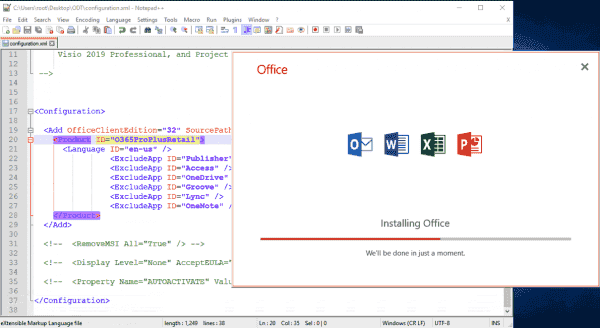 Installation of Office 2019 is limited to the four core applications

In addition to this core configuration, the ODT also supports several other options. With these, you can acknowledge the EULA automatically or specify which channel to use for future updates.

A useful setting allows you to pin the Office applications to the taskbar. However, this only works under Windows 7 and 8.1; in Windows 10 it has no effect.

The Microsoft Website has complete documentation for all supported settings.

A sample configuration for installing from local media could look like this:

Once the configuration file contains all desired settings, you can start the ODT. Launch the setup.exe from the downloaded ODT archive.

Starting the ODT with a custom installation

After a short preparation phase, the tool displays the icons of the programs it will install.

However, it is not necessary to remove the entire package and then reinstall the desired programs. Instead, you can use the ODT and simply add the programs you want to uninstall under ExcludeApp in the configuration file.

The subsequent execution of setup.exe will then remove all applications you have already installed but excluded in the configuration file.