At a very basic level, you need the following to install Nano Server 2019 as a container on a Windows Server container host:

In the following installation of Nano Server 2019, I already have a Windows Server 2019 host up and running, fully patched, etc. In addition, the host has been loaded with the following:

As a sanity check, it is a good idea to check your Docker version and run a few other Docker commands to ensure your installation is up and running as expected. You can run a simple Docker command, such as:

This will display the version of Docker you are running on your Windows Server 2019 host. 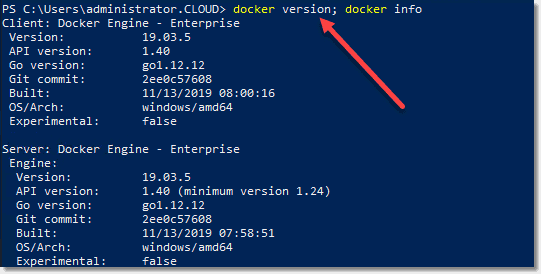 Finding the installed version of Docker in Windows Server 2019

Finding the latest version of Docker available for installation

To update Docker to the latest version available, run the following command:

Due to the nature of containers, they are much more ephemeral than virtual machines. Keeping your container infrastructure updated should allow you to run with the latest and greatest features in your production, development, and test environments.

Now that we have Docker installed, configured, and updated (if needed) on a Windows Server 2019 container host, we are ready to install Nano Server 2019 using a base container image. The "installation" process for Nano Server 2019 is not the typical "boot from ISO" process to run a normal Windows installer.

Since Nano Server is no longer supported as a full standalone installation, as it was in Windows Server 2016, it is installed as a container image. This means that you pull the Nano Server container image from the Microsoft Container Registry (MCR).

You may wonder how to see which Nano Server images are available for pulling to your Windows Server 2019 container host. You can search the Microsoft Container Registry using a built-in Docker command:

The search command returns all the available Nano Server container images that are available to pull down from the Microsoft Container Registry. By default, these are listed in order by the number of stars given to the download. So basically, you are seeing the rating given to the image.

There are two in particular that most will want to pay attention to. These are:

These official images are published by Microsoft. The base image is the current stable release of the Nano Server image that is for general consumption. The insider base image is the preview release that contains all the newest features and functionality; however, this image is not meant for production use like the preview builds that can be downloaded for Windows Server and Windows 10 in general. 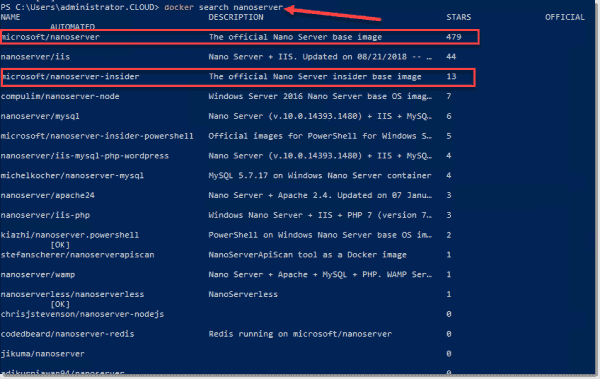 There is a point to note about pulling a Nano Server image from the Microsoft Container Registry. The Windows container version compatibility post from Microsoft states the following:

“Because Windows Server containers and the underlying host share a single kernel, the container’s base image OS version must match that of the host. If the versions are different, the container may start, but full functionally [sic] isn't guaranteed. The Windows operating system has four levels of versioning: major, minor, build and revision.”

Since I am running the GA version of Windows Server 2019 (version 1809), I will specify this as the version of Nano Server to pull down as a container image.

When you pull down a container image, it is extracted by default in Windows Server 2019 in the following directory:

The Nano Server 2019 container will spin up almost instantly. Using the "-it" switch, the Nano Server will launch with an interactive cmd prompt session.