Install fonts in Windows 10 or Windows 11 with Group Policy

Wolfgang Sommergut  Tue, Mar 29 2022Tue, Mar 29 2022  deployment, windows  3
Microsoft's operating systems already include a number of fonts. However, if users want to install their own fonts on Windows 10 or Windows 11, there are several options to do so. A solution based on Group Policy Preferences can be used for the central distribution of fonts.

There are several reasons for installing additional fonts. For example, you may need them for a marketing brochure if the layout is to stand out from the usual appearance. Companies may also prefer to choose a specific font for their corporate design.

Microsoft has taken a liberal approach in allowing any user to install fonts without elevated privileges. In earlier versions of the operating system, you were still required to have administrative privileges to do this. 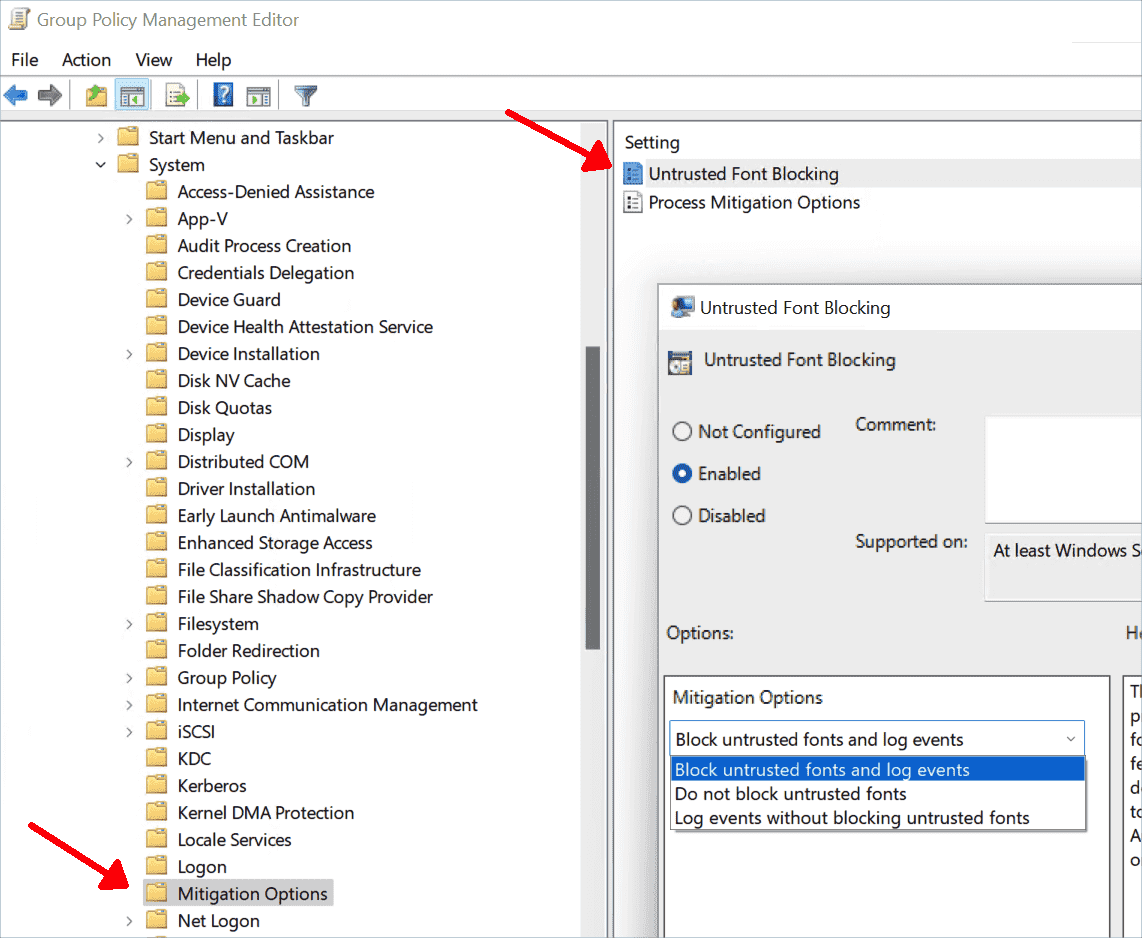 Even if you limit yourself to a simple scenario with TrueType fonts, you will quickly notice that the management of fonts in Windows is inconsistent and relatively confusing.As in earlier versions of the operating system, it is still possible to download a TTF file from any source, preview it by double-clicking, and then install it. 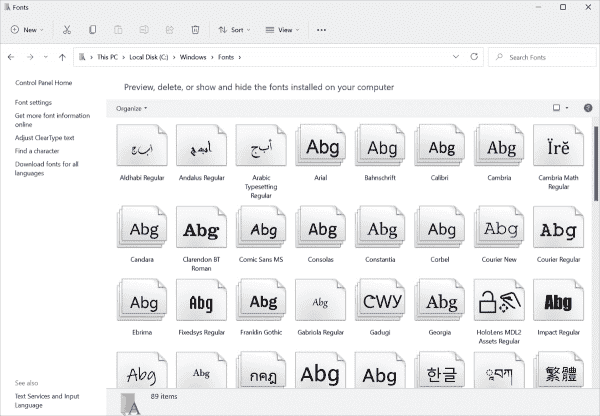 The conventional installation stores the fonts under C:\windows fonts

If you execute the Install for all users command from the context menu of the font file, then you will need administrative rights.In this case, the registry entry is created under HKLM:\Software\Microsoft\Windows NT\CurrentVersion\Fonts, where it then points to the file in the font directory at %systemroot%. 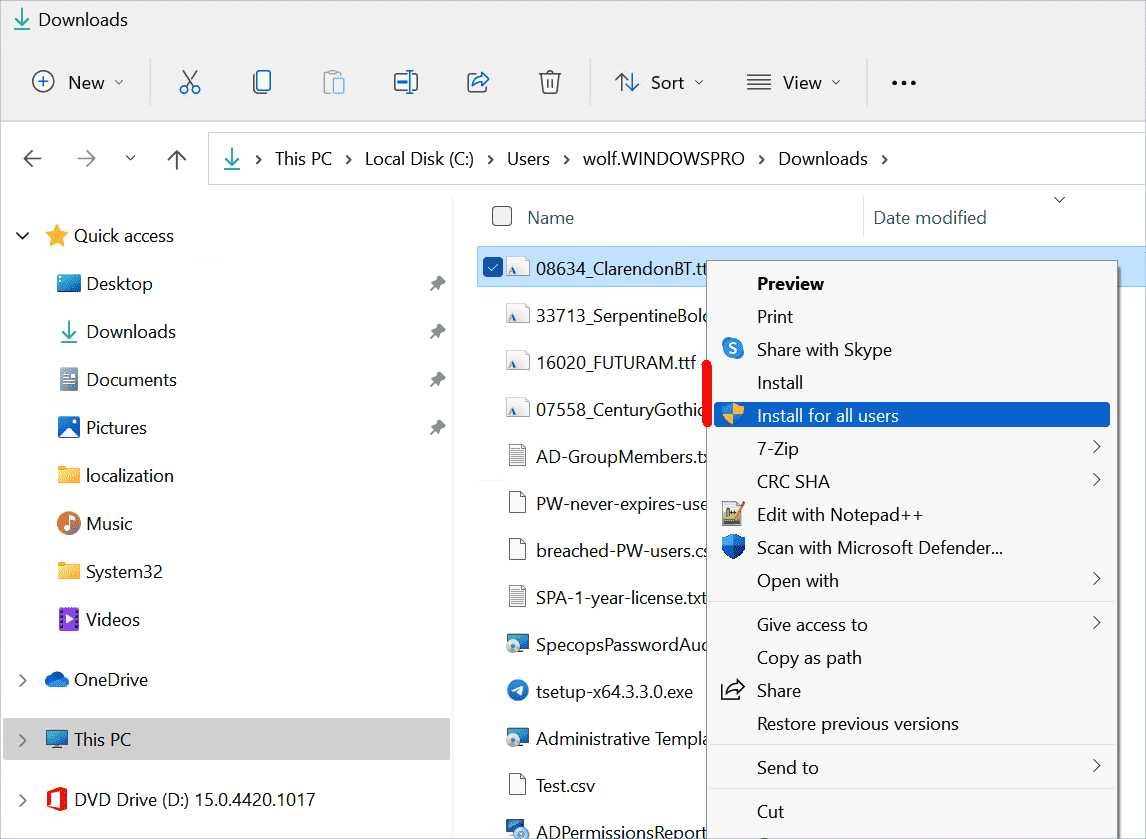 Fonts can be installed globally or per user

Installing fonts from the Microsoft Store ^

Another source for fonts in Windows 10 and 11 is the Microsoft Store. The manufacturer offers a whole range of free TrueType fonts there. The easiest way to get them is to follow the corresponding link in the Settings app under Personalization > Fonts. 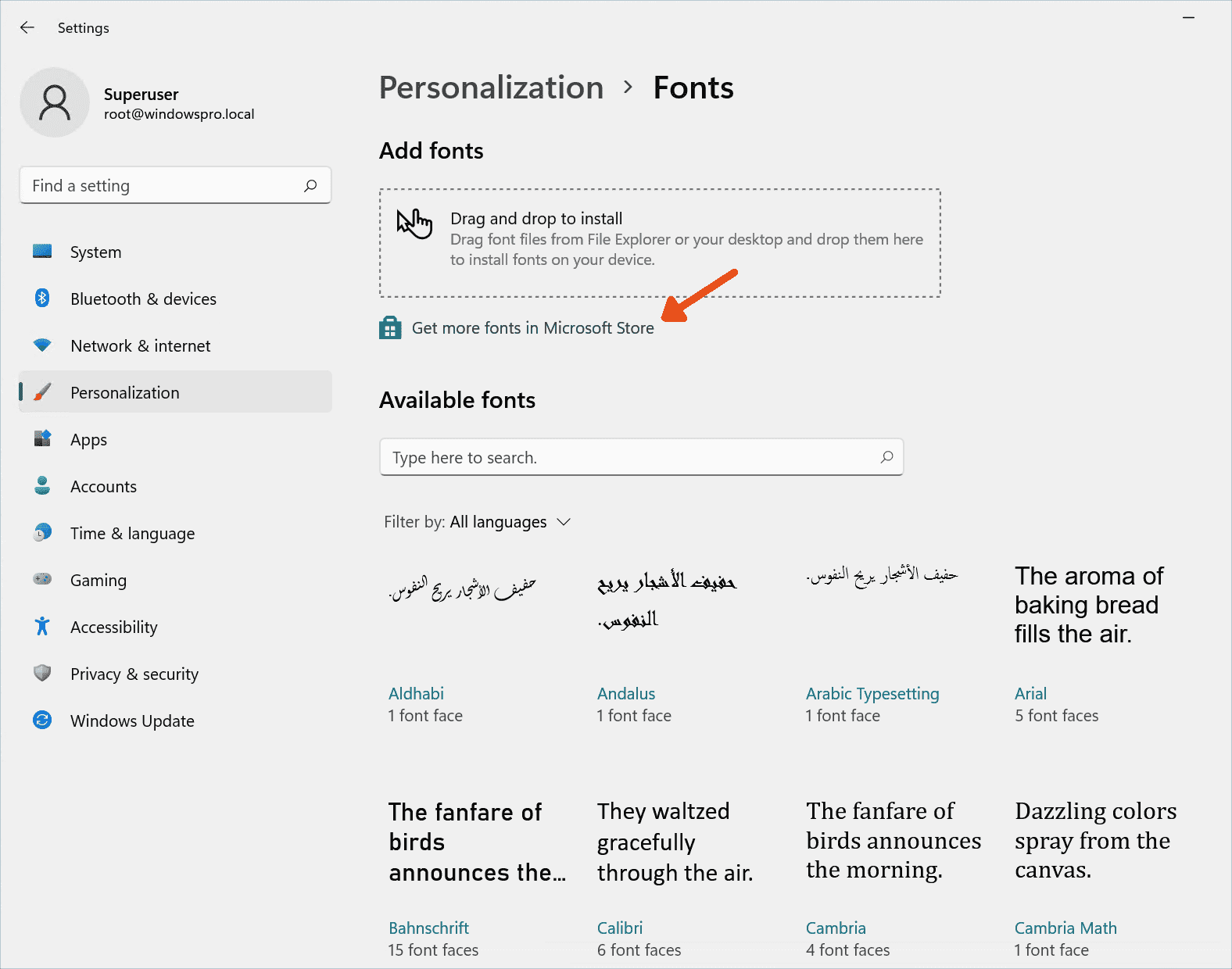 Management of fonts from different sources in the Settings app

Microsoft provides fonts in an APPX package like the Store apps. Since APPX has its own installation mechanism, the fonts from the Store never appear under %systemroot%\fonts or in the user profile under %localappdata%. They are managed via the Settings app, the Store app, or PowerShell. 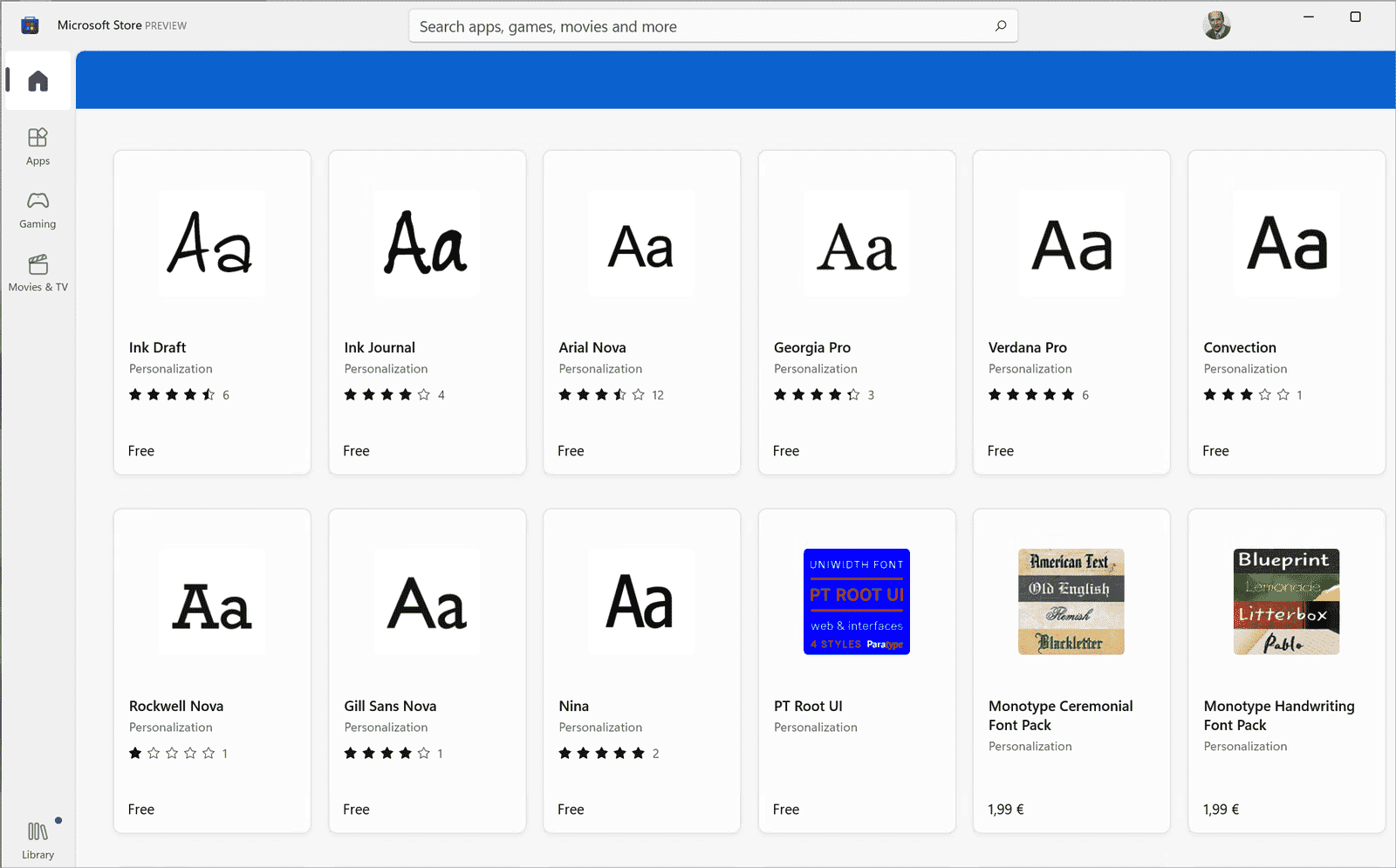 Free fonts in the Microsoft Store

Since the new package manager winget has been able to install apps from the Store for some time now, you would think it would be suitable for adding fonts. However, it is currently incapable of doing so.

If you need non-European fonts, for example, for Arabic or Japanese, you can add them as WindowsCapability. PowerShell is the tool of choice. The first step is to display the available fonts as follows:

Then add the desired font, in this example Arabic, as follows:

While group policy does not have its own mechanism for installing fonts, you can use Group Policy Preferences to copy TTF files to %systemroot%\font and set the registry entry under HKLM:\.

To do so, install the font on the local machine with administrative rights for all users to get the desired value in the registry. Then create a new GPO, open it in the editor, and go to Computer Configuration > Preferences > Windows settings > Registry. 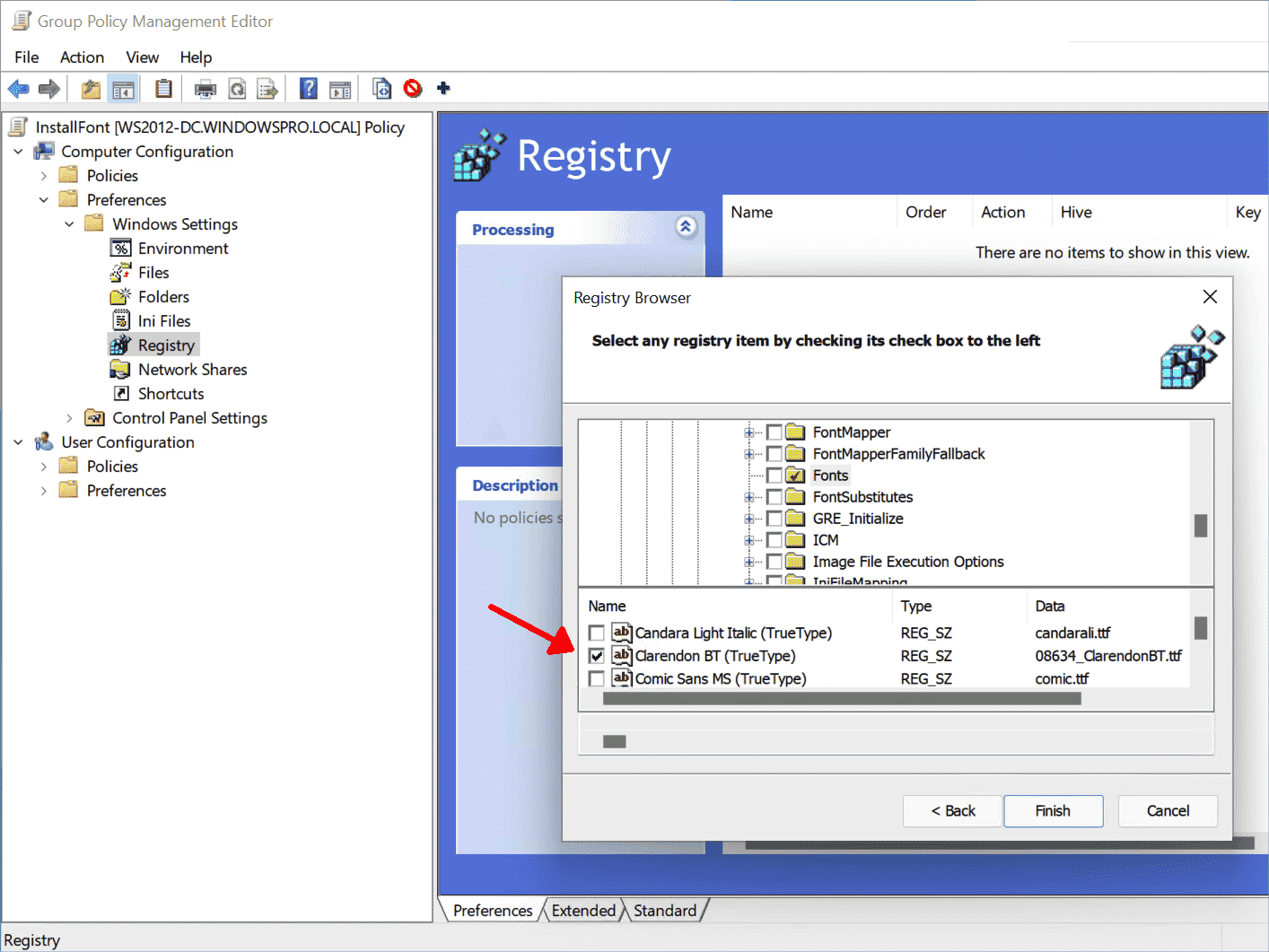 Adding the registry key for the font file to the GPO

From the context menu, select New > Registration Wizard. You can use it to click through to the required key under HKLM:\Software\Microsoft\Windows NT\CurrentVersion\Fonts.

To copy the TTF file to the Fonts directory of the target computers, place it on a network share. 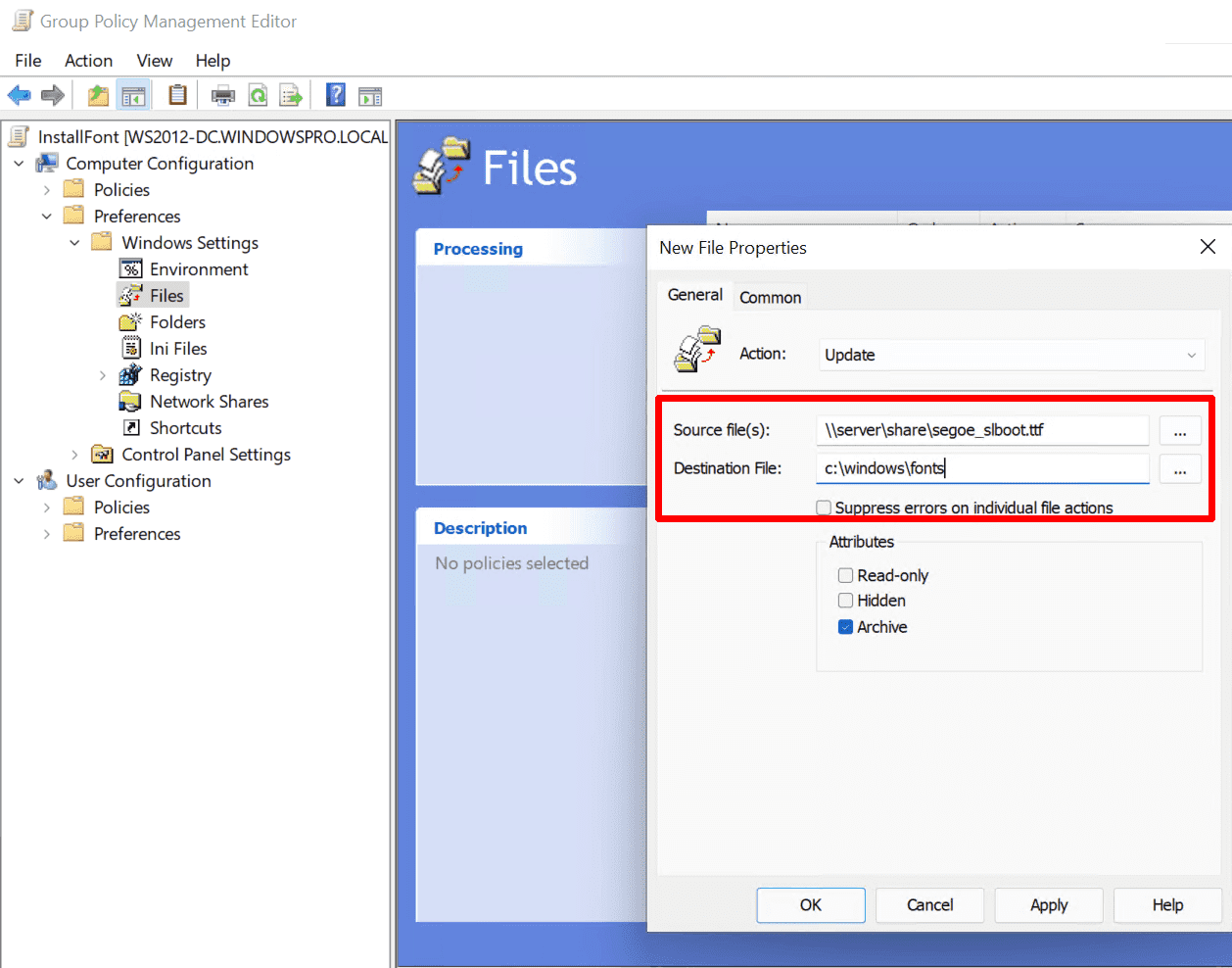 Then edit the GPO again and go to Computer Configuration > Preferences > Windows Settings > Files. There, you run the command New > File, and enter the source and destination files.

Fonts can be installed in Windows 10 and 11 from multiple sources in various ways. Common management is only available via the Settings app under Personalization. Non-European fonts cannot be installed there, but they can at least be removed.

Overall, the focus of all the methods is on the installation of fonts by the user. If admins want to provide a font for all users, they can build a solution with Group Policy Preferences.