Timothy Warner  Fri, Apr 3 2015Wed, Jun 23 2021  azure, cloud computing, desktop virtualization, virtualization  0
Docker is an open-source application deployment solution that might play an important role in the Windows world soon. In this introduction to Docker, you will learn how to install and test Docker on Windows.

Of course, you probably have these questions on your mind:

Let’s address both of those questions straightaway. By the conclusion of this article, I want you to have a clear picture of what Docker is, how it works, and how it may factor into future Windows OS versions.

I want us to dive into the tech as quickly as possible, so I’ll make this definition fast. According to the Docker web site, Docker is and open-source platform for building and distributing applications. In a Docker infrastructure, your applications run in totally isolated, trimmed-down containers that are protected from other containers as well as your base operating system.

Some define Docker as an application virtualization solution, and Microsoft techs immediately draw comparisons between Docker and its own App-V and RemoteApp products.

Docker, I think, has some advantages over Microsoft, Citrix, and other app virtualization vendors. The open-source angle is nice from a security and cost standpoint. Also, Docker containers make it simple to deploy complex applications (even n-tier apps such as a WordPress content-management pod) along with all their dependencies. Docker accomplishes this through modularization. To wit, Docker consists of two primary components:

The challenge for us as Microsoft professionals, of course, is that Docker was conceived to run in the Linux world. This makes sense to me because most software in Linux is open-source and more accessible from a low level than is proprietary software such as Microsoft’s or Apple’s. That said, Microsoft sees enough business value in Docker that it won’t be too long before we see a native Windows Docker engine.

For now, though, we have to settle for a virtual machine-based Docker implementation that isn’t as lean as native Docker but is certainly better than nothing.

In this case study, we’ll install Docker for Windows (such as it is in early 2015) and deploy a pre-made WordPress content management system (CMS) container as a proof of concept. 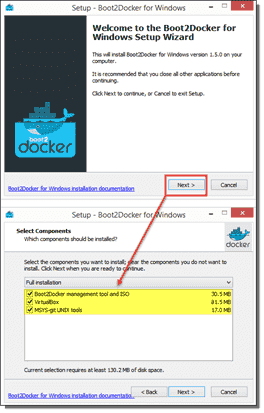 If you accept the installation defaults (which I highly suggest you do), the software gives you the following three components:

You’re recommended to restart Windows before running Docker for the first time, but I was able to proceed without rebooting.

Next, double-click the pretty Boot2Docker Start Desktop icon to start the Boot2Docker management tool. You’ll be prompted to allow VirtualBox to bind two virtual network interfaces, and before long you’ll see a decidedly Linux-y command prompt ,as shown in the following screen capture.

Docker for Windows gives us a pretty icon and a command-line interface. Is that an oxymoron?

To verify that Docker is functioning correctly, run the following command from the Boot2Docker client:

If all goes well, you’ll see a bunch of explanatory text on your screen. The part that I find the most interesting is the following list, which explains what just happened on your Windows box:

To generate this message, Docker took the following steps:

So what’s happening is that when we try to start a container with the docker run command, our Boot2Docker client contacts the Docker runtime daemon (what we might consider to be a service in Windows) to check whether the container is locally available. In our case, the Docker daemon runs inside a VirtualBox VM.

As you can see in the following screenshot, my Docker for Windows session spawns a bunch of Oracle VirtualBox processes, but it added nothing to my Windows box’s actual service list. When you exit Docker, those processes go away. 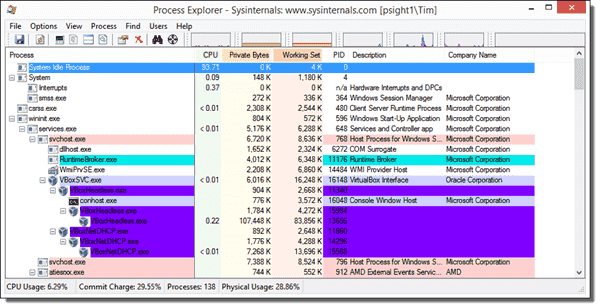 All we see of Docker at the Windows OS level is the VirtualBox VM that runs the Docker components.

That having been said, as you can see in the following screenshot, Docker for Windows does permanently install Oracle VirtualBox on your host system, so be prepared for that. Again, once Windows supports Docker natively, we won’t need a Linux-based virtual machine to act as a shim. 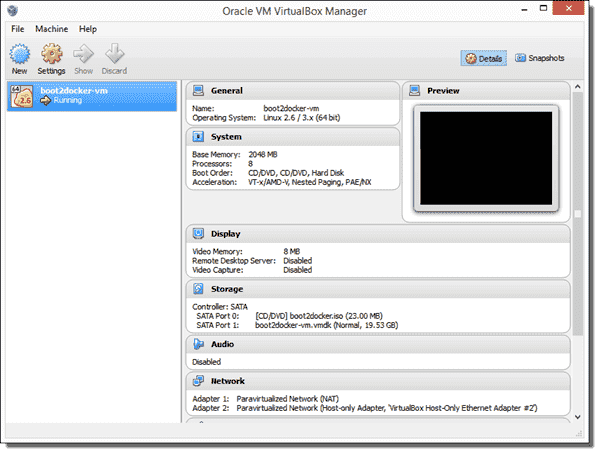 In Windows, the Docker engine runs in an honest-to-goodness Linux virtual machine inside Oracle VirtualBox.

Hello World is fine for starters, but I want to try out a truly impressive container. How about WordPress? As you may or may not know, WordPress is a blog/content management system that runs in a LAMP (Linux, Apache web server, MySQL database, PHP) stack.

We can run docker images at any time in Boot2Docker to see what containers are available locally:

You’ll find that several Docker community members contributed their own WordPress Docker containers. Of course, the standard rules apply concerning how much you want to trust publically accessible software repositories. In the future, I’m sure that we Windows administrators will build our own Docker images and host them on private repositories.

Anyway, I chose Eugene Ware’s WordPress build because (a) it works; and (b) he uses nginx as the web server instead of Apache.

First we need to clone Eugene’s GitHub repo, which makes all the WordPress containers available to our Windows system:

After Docker downloads all the bits, you’ll need to use cd to switch your focus into the local repository:

Next, we’ll build the containers:

Don’t forget about the space and the dot at the end of the preceding command string!

Once the build completes, our final step is to start the containers and map TCP port 8081 in Windows to port 80 in the Docker container:

As you can see in the following screenshot, I connected to WordPress instantly after pointing my browser to the VirtualBox virtual network interface’s private IP address (http://192.168.59.103:8081). 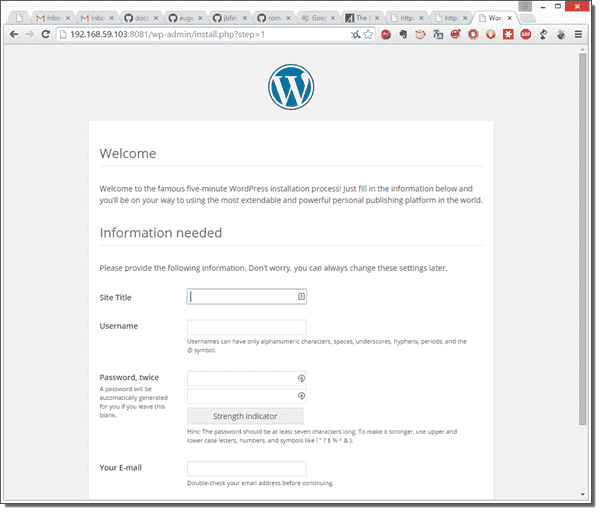 This is a fully portable and containerized WordPress installation.

Cleaning up the environment ^

You’ve heard the expression RTFM (“Read the Friendly Manual!”) before, right? To that point, you should spend time reading the Docker User Guide. Also, you can get a list of all available Docker commands from the CLI by running:

To stop a container, you need to know its name, so run the following command and take note of the image name. I took the liberty of formatting the output in a more eye-friendly way:

I’m not sure what’s up with that wacky “romantic_mcclintock” name, to be perfectly honest with you. Perhaps it’s a tongue-in-cheek, globally unique identifier? Anyway, to stop our WordPress/nginx image, let’s run the appropriate command:

Refreshing my browser on my containerized WordPress site gives a 404 error, which is perfectly expected.

So what do you think of Docker? Even though its current implementation on Windows isn’t “true” Docker because we are hosting the Docker environment inside a Linux virtual machine, I hope that you were as impressed with its capabilities as I am.

Imagine a Windows Server in which the operating system itself runs in a tidy container. Think of how much more modular, granular, and secure this setup would be. Any applications we deploy on top of Windows also run in isolated containers. Yes—this is why Docker and application virtualization caught Microsoft’s attention so thoroughly in 2014. See you next time.